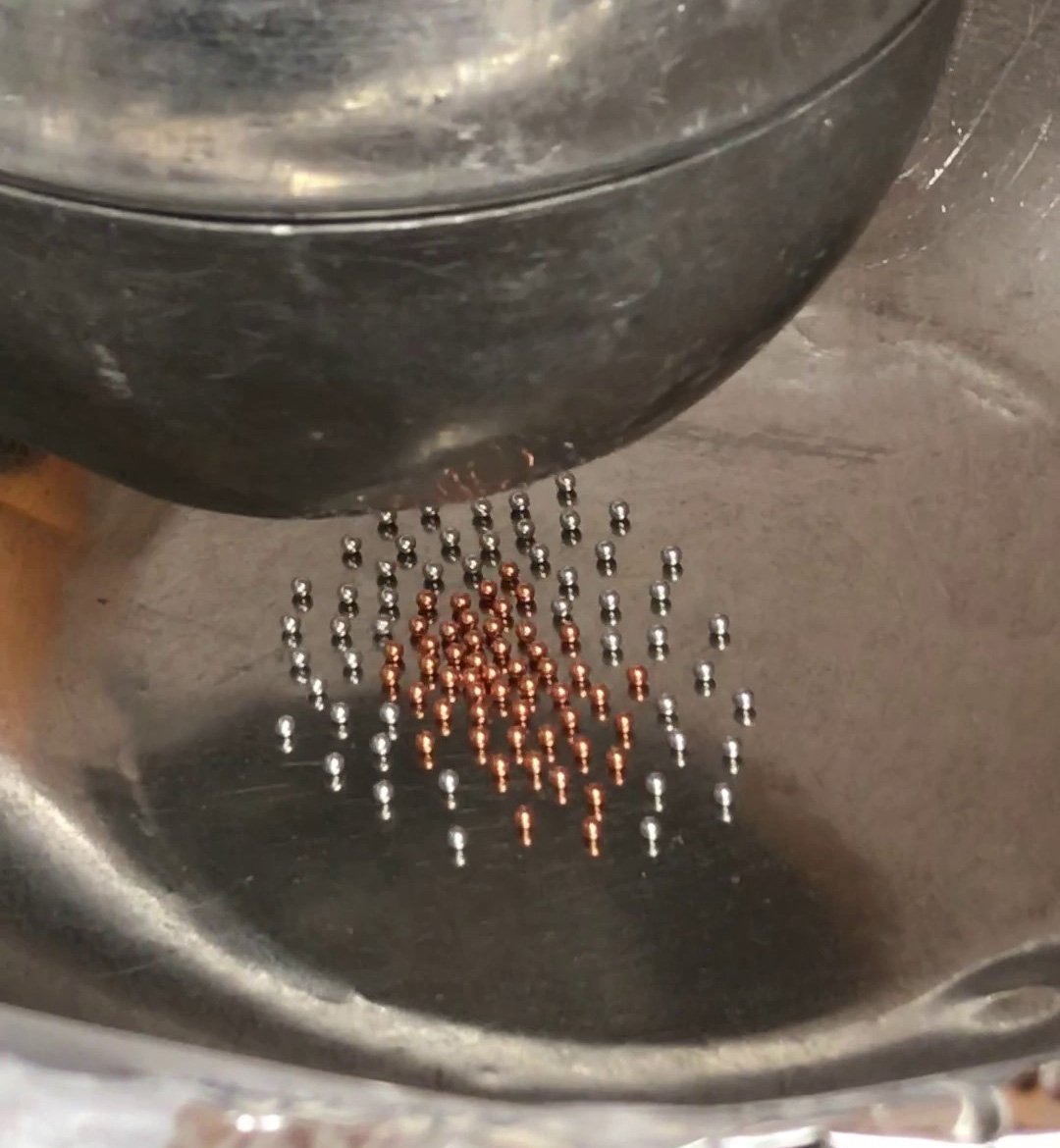 Grab a mixing bowl from your kitchen, throw in a handful of aluminum balls, apply some high voltage, and watch an elegant dance unfold where particles re-arrange themselves into a distinct “crystal” pattern. This curious behavior belongs to the phenomenon known as Wigner crystallization, where particles with the same electrical charge repel one another to form an ordered structure (Figure 1).

Wigner crystallization has been observed in variety of systems, ranging from particulates the size of sand grains suspended in small clouds of electrons and ions (called a dusty plasma) to the dense interiors of planet-sized stars, known as white dwarfs. Professor Alex Bataller of North Carolina State University has recently discovered that Wigner crystallization inside white dwarfs can be studied in the lab using a new class of classical systems, called gravity crystals.

For the curious behavior of Wigner crystallization to occur, there must be a system composed of charged particles that are both free to move about (plasma), that strongly interact with each other (strongly coupled particles), and has the presence of a confining force to keep the plasma particles from repulsively exploding away from each other.

To study this condition for small scales in the laboratory, Dr. Bataller devised a new arrangement that places metal spheres in contact with a high voltage confining surface, which charges the spheres by transferring hundreds of millions of electrons to their surface, and thereby increases particle repulsion, and also keeps the particles contained. In addition, when the spheres roll over the surface, their motion produces friction that quickly reduces kinetic energy and promotes strong coupling.

The key insight that enabled the present discovery was to use gravity as the confining force. In this way, small charged spheres can be gravitationally confined using a simple geometry…a bowl.

By using gravitational confinement, Dr. Bataller discovered that Wigner crystallization can also be extended to macroscopic dimensions with particles a million times more massive than its dusty plasma cousin, which can now be used to study other crystal systems. For example, gravity crystals can simulate a curious feature of white dwarf stars called sedimentation. It was recently discovered that stratified crystal layers can form within white dwarf stars containing oxygen and carbon, where the heavier oxygen “sinks” to the core. The gravity crystal arrangement (Figure 2) reproduces this layering effect when applying high voltage to an initially mixed system of copper and aluminum balls. Analogous to sedimentation in white dwarf stars, the copper balls gravitate toward the bowl center while maintaining a crystal structure.

The plasma properties and external environment of a gravity crystal and a white dwarf star are as different as one can imagine, yet both systems exhibit similar behavior, which speaks to the robust nature of Wigner crystallization.

“The rich diversity of systems where we’ve observed Wigner crystallization is a direct result of its scale-independent nature,” Dr. Bataller said. “Gravity crystals extend this phenomenon to human dimensions while needing minimal resources. What excites me most about this new platform is that virtually any curious individual can recreate this fascinating state of matter that, until now, has been limited to million-dollar experiments and within the dense interior of stars.”