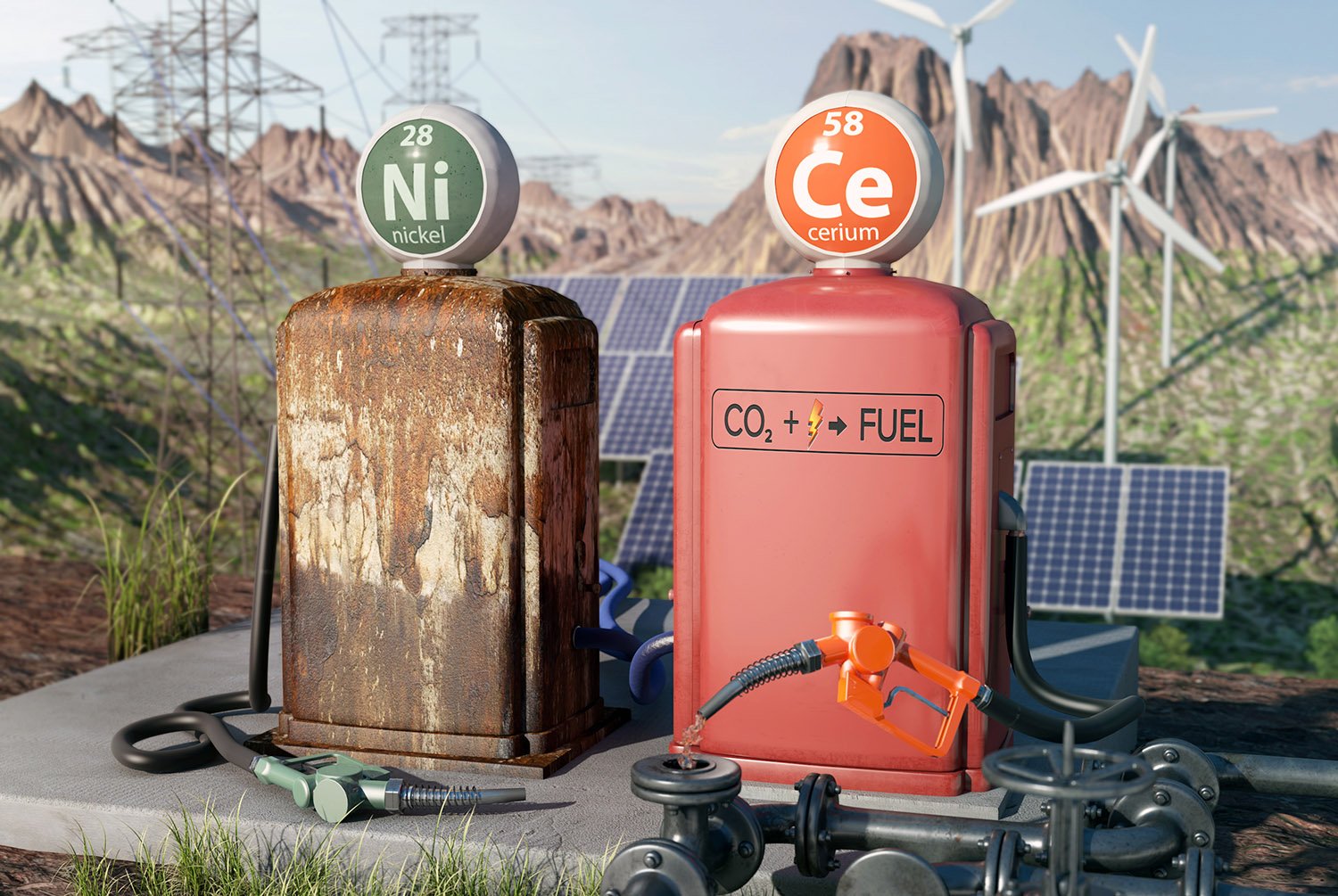 If the idea of flying on battery-powered commercial jets makes you nervous, you can relax a little. Researchers have discovered a practical starting point for converting carbon dioxide into sustainable liquid fuels, including fuels for heavier modes of transportation that may prove very difficult to electrify, like airplanes, ships and freight trains.

Carbon-neutral re-use of CO2 has emerged as an alternative to burying the greenhouse gas underground. In a new study published today in Nature Energy, researchers from Stanford University and the Technical University of Denmark (DTU) show how electricity and an Earth-abundant catalyst can convert CO2 into energy-rich carbon monoxide (CO) better than conventional methods. The catalyst – cerium oxide – is much more resistant to breaking down. Stripping oxygen from CO2 to make CO gas is the first step in turning CO2 into nearly any liquid fuel and other products, like synthetic gas and plastics. The addition of hydrogen to CO can produce fuels like synthetic diesel and the equivalent of jet fuel. The team envisions using renewable power to make the CO and for subsequent conversions, which would result in carbon-neutral products.

“We showed we can use electricity to reduce CO2 into CO with 100 percent selectivity and without producing the undesired byproduct of solid carbon,” said William Chueh, an associate professor of materials science and engineering at Stanford, one of three senior authors of the paper.

Chueh, aware of DTU’s research in this area, invited Christopher Graves, associate professor in DTU’s Energy Conversion & Storage Department, and Theis Skafte, a DTU doctoral candidate at the time, to come to Stanford and work on the technology together.

“We had been working on high-temperature CO2 electrolysis for years, but the collaboration with Stanford was the key to this breakthrough,” said Skafte, lead author of the study, who is now a postdoctoral researcher at DTU. “We achieved something we couldn’t have separately – both fundamental understanding and practical demonstration of a more robust material.”

One advantage sustainable liquid fuels could have over the electrification of transportation is that they could use the existing gasoline and diesel infrastructure, like engines, pipelines and gas stations. Additionally, the barriers to electrifying airplanes and ships – long distance travel and the high weight of batteries – would not be problems for energy-dense, carbon-neutral fuels.

Although plants reduce CO2 to carbon-rich sugars naturally, an artificial electrochemical route to CO has yet to be widely commercialized. Among the problems: Devices use too much electricity, convert a low percentage of CO2 molecules, or produce pure carbon that destroys the device. Researchers in the new study first examined how different devices succeeded and failed in CO2 electrolysis.

With insights gained, the researchers built two cells for CO2 conversion testing: one with cerium oxide and the other with conventional nickel-based catalysts. The ceria electrode remained stable, while carbon deposits damaged the nickel electrode, significantly shortening the catalyst’s lifetime.

“This remarkable capability of ceria has major implications for the practical lifetime of CO2 electrolyzer devices,” said DTU’s Graves, a senior author of the study and visiting scholar at Stanford at the time. “Replacing the current nickel electrode with our new ceria electrode in the next generation electrolyzer would improve device lifetime.”

Eliminating early cell death could significantly lower the cost of commercial CO production. The suppression of carbon buildup also allows the new type of device to convert more of the CO2 to CO, which is limited to well below 50 percent CO product concentration in today’s cells. This could also reduce production costs.

“The carbon-suppression mechanism on ceria is based on trapping the carbon in stable oxidized form. We were able to explain this behavior with computational models of CO2 reduction at elevated temperature, which was then confirmed with X-ray photoelectron spectroscopy of the cell in operation,” said Michal Bajdich, a senior author of the paper and an associate staff scientist at the SUNCAT Center for Interface Science & Catalysis, a partnership between the SLAC National Accelerator Laboratory and Stanford’s School of Engineering.

The high cost of capturing CO2 has been a barrier to sequestering it underground on a large scale, and that high cost could be a barrier to using CO2 to make more sustainable fuels and chemicals. However, the market value of those products combined with payments for avoiding the carbon emissions could help technologies that use CO2 overcome the cost hurdle more quickly.

The researchers hope that their initial work on revealing the mechanisms in CO2 electrolysis devices by spectroscopy and modeling will help others in tuning the surface properties of ceria and other oxides to further improve CO2 electrolysis.