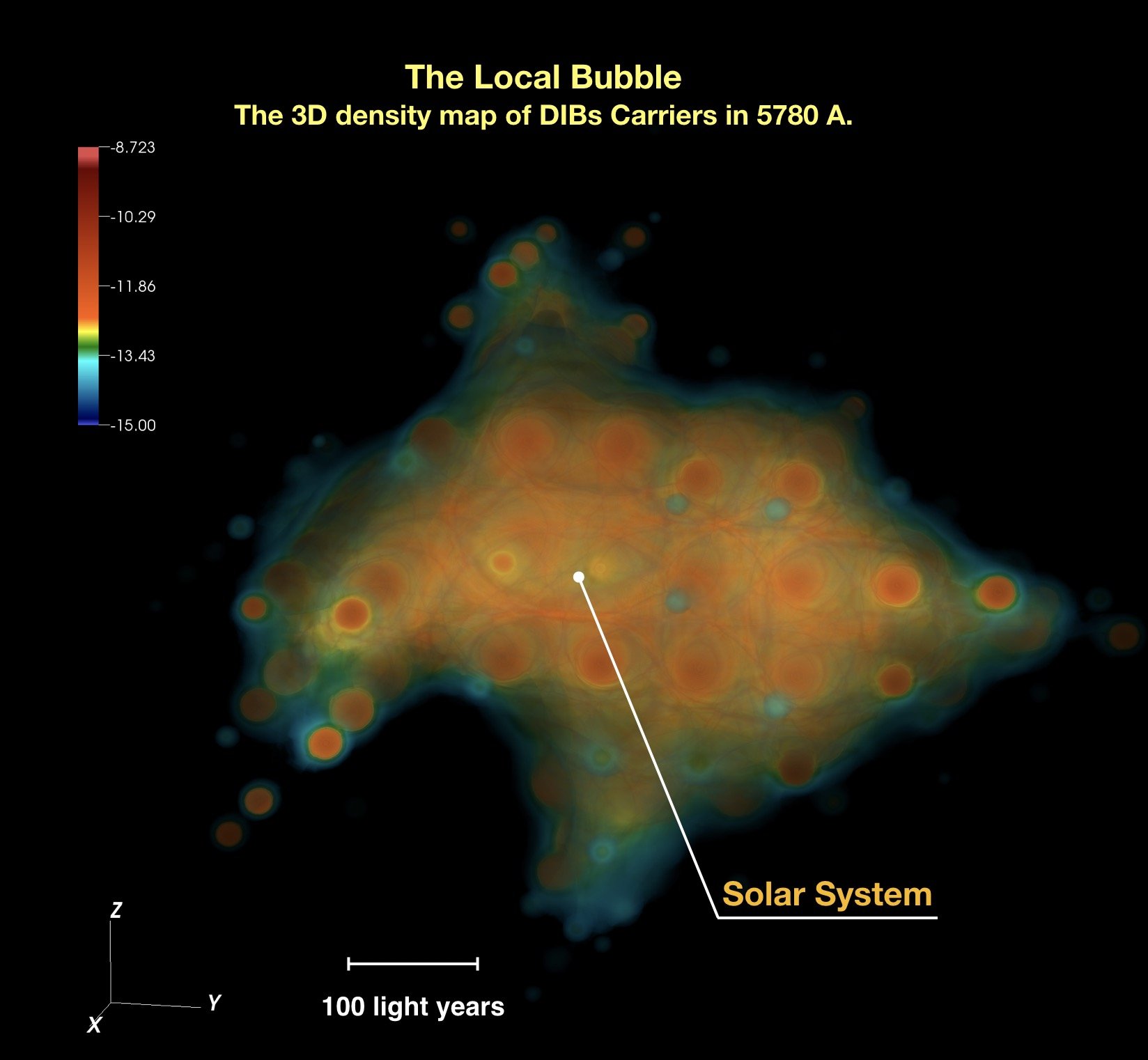 A team of researchers from Iran and the UK have obtained the first 3D map of the Local Bubble through a survey of diffuse interstellar bands (DIBs), a mysterious absorption feature seen in the stellar spectra, using two telescopes in the northern and southern hemispheres.

The solar systems is located in a very hot and low density environment in which a million degree K temperature prevents matter to remain in ordinary atomic forms. Previous studies have revealed an empty bubble within a radius of about a hundred light years around the solar system, thus dubbed as the Local Bubble. This cavity is thought to have been created by multiple supernovae, which mark the death of stars more massive than the sun, events which could have occurred tens of millions of years ago.

The team led by astronomers from the Institute for Research in Fundamental Sciences (IPM) in Tehran and the Lennard-Jones Laboratories at Keele University in the UK have conducted a four-year long survey to search for other surviving forms of matter, generally complex carbon-based molecules suspected of surviving the harsh conditions.

Given that the previous studies had found no ordinary matter, they had to rely on fingerprints of absorption features on the stellar spectra of distant stars and thus study the spectra of hundreds of stars with a strong enough signal in all directions to detect certain DIB carriers.

“DIB’s are one of most mysterious features for astronomers with an unknown origin but they became handy in mapping the Local Bubble”, Amin Farhang the lead author of the Nature Astronomy article, published today, claims.

The survey made use of the Isaac Newton Telescope on La Palma (Spain) and the European Southern Observatory’s New Technology Telescope on La Silla (Chile) using which over 600 high quality spectra were obtained and analysed. Computational methods allowed them to convert the observational data into a 3D density distribution of the DIBs in 578.0 nm

The research establishes that the solar system is surrounded by the carriers of these DIBs. “when the Sun and the Earth move through this material, it is not unthinkable that some of it might find their way onto our planet or elsewhere in the solar system”, Jacco van Loon one of the co-authors suggests posing the question whether it could have brought some vital ingredients for Life on the planet!

This collaborative research was supported by the Iranian National Observatory at IPM, and the Science and Technology Facilities Council (UK) and the Royal Society. The results were published in the latest issue of the Nature Astronomy, July 2019, co-authored by Amin Farhang (IPM), Jacco van Loon (Keele), Habib Khosroshahi (IPM), Mandy Bailey (Open University) and Atefeh Javadi (IPM).