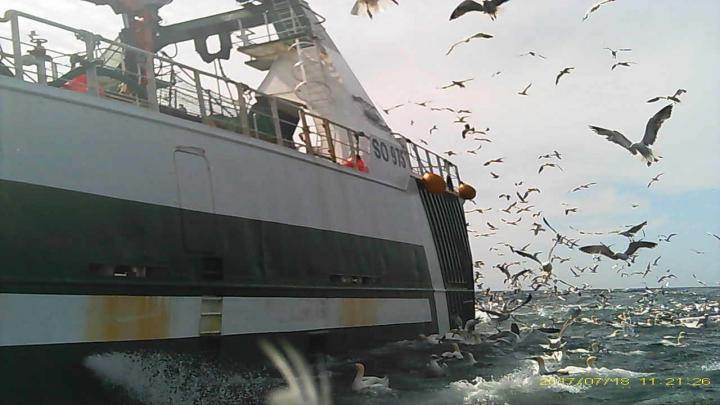 University of Exeter scientists estimate that 267,000 tonnes of fish was discarded in the North Sea in 2010 – enough to feed 3.45 million birds.

Discarding in the North Sea – one of the places in the world with the highest levels of this – is thought to have peaked around 1990.

The study examined eight species, including northern gannets and herring gulls, and the figures are based on birds that rely to some extent on discarded fish (based on observations of how much discarded fish different bird species eat).

“Commercial fishing has a variety of effects on marine life, but the impact of discards is one of the least studied and least understood,” said lead author Dr Richard Sherley, of the Environment and Sustainability Institute on Exeter’s Penryn Campus in Cornwall. “Our study highlights the sheer number of scavenging birds potentially supported by discards and thus the importance of understanding the wider ecological consequences of dumping fisheries waste. With discards declining over the period we studied, the number of birds able to rely on this has also declined.”

The researchers estimate that the largest declines were in northern fulmars (1.4 million), black-legged kittiwakes (1.3 million) and herring gulls (630,000).

These declines also coincide with population declines at some North Sea colonies in each of these species.

However, the reasons for these declines are not entirely clear, and may not necessarily be underpinned by changes in discards, though changes in herring gull numbers at some sites have been linked to declining discards.

Dr Sherley said fish are discarded for a variety of reasons.

“Fishers trying to catch one species may catch another (known as bycatch), and some fish may be partly processed on fishing boats, with the resulting offal thrown overboard,” he said. “Changes including the EU’s ‘landing obligation’ – which says any fish caught should be brought to shore – have reduced the amount of discard. There have also been improvements in fishery management, more targeted fishing – aided by technology to prevent bycatch – and efforts to land and use any fish that are caught, even if they’re not among the species that humans generally eat.”