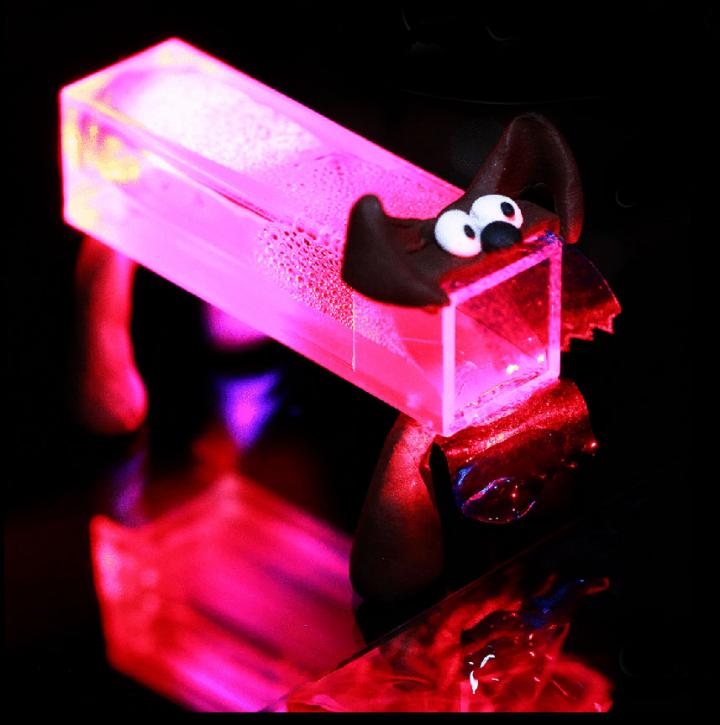 Conditioning is a method made famous by Ivan Pavlov’s experiments with dogs. Pavlov trained a dog by ringing a bell every time the dog was fed. The dog learned to associate the bell with food, and then drooled when it heard the bell ring, even if it didn’t see anything to eat. In an earlier study, researchers at Aalto University and Tampere University succeeded in conditioning a solid gel so that it melted to become liquid under the influence of light alone. Now, the same researchers have taught a liquid crystal polymer to move, and to stick to an object of a given colour.

“At first, the liquid crystal polymer did not react to light at all, but during the process, it learned to move and grab objects under the guidance of light. The idea is the same as in the previous study, but now the conditioning includes tangible functions”, Professor Olli Ikkala from Aalto University explained.

The plastic used in the study contains liquid crystal molecules whose positioning relative to one another is important for flexibility and transformation.

‘Conditioning can teach materials new tricks, such as recognising colours or moving in conditions where they don’t originally move,’ said Professor Arri Priimägi from Tampere University.

“For material to learn, it must have a memory. When the material is heated, the dye originally spread on the surface of the liquid crystal polymer penetrates into the material, thus forming the memory. Different dyes react to different wavelengths of light, so the initially neutral stimulus (color of light) can be controlled by the dye applied onto it. Additionally, when designing the material, molecules must be positioned so that the material reacts as desired when heated,” Olli Ikkala said.

“If you give a typical mechanical robot a strawberry it might crush it. So, we need robots that can grasp things very softly. Traditional robots also often need a power cord or a large, heavy battery. Soft robotics aims at lightweight, external control, for example by using light,” said Olli Ikkala.

According to Olli Ikkala, new kinds of materials with the ability to “learn” can be useful in soft robotics already now, even though the functions are still limited.

Arri Priimägi’s team has specialised in soft robotics research for a few years now. According to Priimägi, this research can also open up new opportunities in materials technology. It may be possible in the future to create coating materials that change their function under different conditions.

“The concept of conditioning is not only tied to this experimental setting, but can be extended to other areas as well. But at the moment, conditioning is only achieved through the combined effect of light and heat,” Priimägi said.

“Since functional materials can be controlled by a variety of other stimuli, such as electric and magnetic fields, humidity changes, or chemicals, in addition to light and heat, there are many alternatives to further developing this concept. The material must also have a memory which is activated by a signal,” Arri Priimägi said.

In addition to Olli Ikkala and Arri Priimägi, the research group includes postdoctoral researchers Hang Zhang from Aalto University and Hao Zeng from Tampere University. The research was carried out at the Academy of Finland’s Centre of Excellence in Molecular Engineering of Biosynthetic Hybrid Materials (HYBER), and it is part of the Academy of Finland Flagship Programme on photonics (PREIN). The project has been funded by the European Research Council’s projects DRIVEN and PHOTOTUNE. The research is being published in the journal Matter.