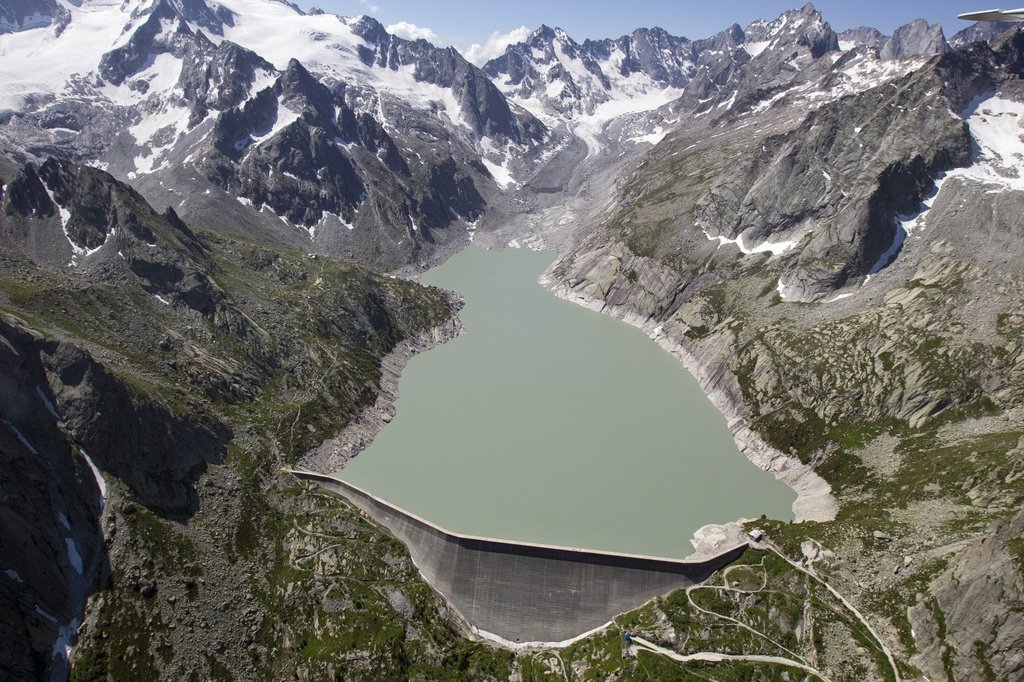 Global warming will cause substantial glacier retreat for the majority of the world’s glaciers over the next few decades. This will not only spell the end for some magnificent natural monuments, but also importantly affect the water cycle. In high-mountain regions, these ice masses act as reservoirs feeding water to large river systems, and balancing seasonal discharges.

Without glaciers, rivers would carry considerably less water in summer, which would have noticeable consequences for water availability, energy production and agriculture in many regions of the world. Researchers had previously discussed the idea of compensating the shrinking storage function of glaciers with reservoirs.

A group of glaciologists from ETH Zurich and the Swiss Federal Institute for Forest, Snow and Landscape Research WSL is now again engaging in the discussion about the dwindling ice: in a study published in Nature, they investigate the global potential for storing water and producing hydropower in presently-glacierised areas that will become ice-free within this century.

In their study, the research team around Daniel Farinotti, Professor of Glaciology at the Laboratory of Hydraulics, Hydrology and Glaciology (VAW) at ETH Zurich and at WSL, analysed about 185,000 glaciers. For these sites they calculated a maximum theoretical storage potential of 875 cubic kilometers (km3) and a maximum theoretical hydropower potential of 1350 terawatt hours (TWh) per year.

“This theoretical total potential corresponds to about one third of current hydropower production worldwide. But in reality, only part of it would be realisable”, explains Farinotti.

In order to obtain a more realistic estimate, the researchers conducted an initial suitability assessment for all sites. They identified around 40 percent of the theoretical total potential as “potentially” suitable, equalling to a storage volume of 355 km3 and a hydropower potential of 533 TWh per year. The latter corresponds to around 13 percent of the current hydropower production worldwide, or nine times Switzerland’s annual electricity demand.

“Even this potentially suitable storage volume would be sufficient to store about half of the annual runoff from the studied glacierised basins,” Farinotti says. Assuming an average climate scenario, about three-quarters of the storage potential could become ice-free by 2050.

For their analysis, the glaciologists used a global glacier inventory and placed virtual dams at the current terminus of each glacier with an area of more than 50,000 square meters located outside the Subantarctic. They then optimised the size of the reservoirs by appropriate dam positioning and height. In doing so, they minimised the reservoirs’ impact on the landscape and did not just maximise economic return. The team used digital elevation models of the subglacial terrain and combined them with a glacier evolution model to determine the storage volume of the 185,000 glaciers they had selected.

In the suitability analysis that followed, the researchers assessed the sites based on several ecological, technical and economic criteria: “On this basis, we ruled out the most unsuitable sites; this enabled a more realistic assessment,” explains co-author Vanessa Round, who had a pivotal role in the study. She also adds that it is neither realistic nor desirable to build a dam for every glacier.

A model for the future?

The team also stresses that local impacts should be assessed on a case-by-case basis. Nevertheless, the results indicate that deglacierised basins could significantly contribute to national energy supply and water storage in a number of countries, particularly in High Mountain Asia.

Among the countries with the largest potentials are Tajikistan, where the calculated hydropower potential could account for up to 80 percent of current electricity consumption, Chile (40 percent) and Pakistan (35 percent). In Canada, Iceland, Bolivia and Norway, the potential equals 10–25 percent of their current electricity consumption. For Switzerland, the study shows a potential of 10 percent.

Meanwhile, the Swiss Federal Office of Energy has recently revised downwards the expansion potential for Swiss hydropower. This is mainly because of revised estimates for the impact of stricter regulations on environmental flows, and because the potential of small-scale hydropower is now considered to be lower than it was in 2012. However, in its assessment, the SFOE explicitly excluded the hydropower potential that could arise from future ice-free basins. For this reason, the glaciologists led by Farinotti do not see a contradiction to their results, as the two studies cannot be directly compared.