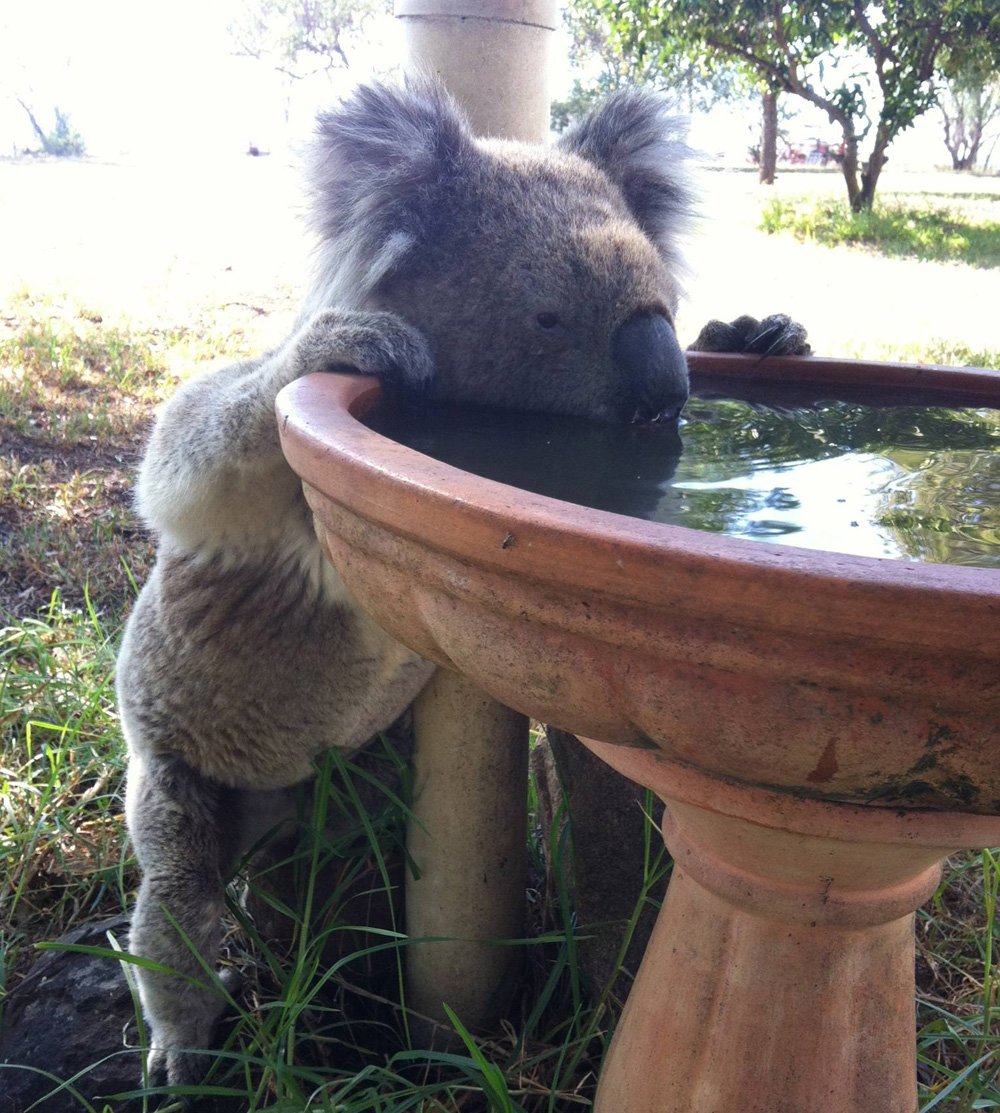 A long-held view that koalas get all their hydration from eating leaves has been overturned by new research published today from Dr Valentina Mella and colleagues at the University of Sydney.

The study in PLOS ONE offers hope in the fight to conserve this threatened species, with researchers finding that koalas will regularly use artificial water stations, particularly during hot and dry conditions.

“Drinking stations could help koalas during heat and drought events and might help mitigate the effects of climate change,” said Dr Mella from the School of Life and Environmental Sciences.

Dr Mella also said drinking stations could prove a useful strategy to support other arboreal folivores such as gliders and possums in Australia and sloths, lemurs and some monkeys on other continents.

Koala populations along Australia’s east coast have been declining due to lost habitat from deforestation, diseases such as chlamydia, attacks from feral animals, fire and vehicle collisions.

The Australian Department of Environment estimates that combined koala populations in Queensland and New South Wales declined from 326,400 in 1990 to 188,000 in 2010, a drop of 42 percent.

However, koalas are also particularly vulnerable to the effects of climate change, suffering heat stress, Dr Mella said, and because the trees they rely on are affected by temperature and rainfall change.

Koalas can’t simply eat more leaves to compensate for reduced water content in their favourite food. This is because koalas are limited in their food intake by leaf toxins.

“It is predicted that increased CO2 emissions will increase the level of phenolics and tannins in eucalyptus leaves,” Dr Mella said. “This means koalas will need alternative strategies to find water – and that’s where we can help with drinking stations.”

Dr Mella has been conducting field work in Gunnedah in western NSW where, in 2009, a heat wave killed an estimated quarter of Gunnedah’s koala population.

“We weren’t sure if the water stations could be used to mitigate the impact of extreme weather events,” Dr Mella said. “But our results clearly show koalas will regularly use these stations to supplement their water needs.”

During the first 12 months of the study, Dr Mella and her team recorded 605 visits to 10 pairs of water stations, with 401 of these visits resulting in koalas drinking.

They found that the total number of visits and total time drinking doubled during summer compared to other seasons.

“Frequent access to water may be fundamental for koalas to assist thermoregulation when temperatures are high,” Dr Mella said.

Initial findings about koalas’ drinking behaviour were announced in 2017 with videos that showed widespread use of water by the iconic mammals, particularly during drier periods.

The release of these findings prompted a successful fundraising campaign at the University to support further research into koala conservation that raised more than $150,000.

Dr Mella’s study has influenced the direction of state and national koala research, with water supplementation adopted by the NSW Office of Environment and Heritage, included as a specific feature of the NSW Koala Research Strategy and used by the North West Local Land Services as a central concept to koala management on private properties.

“We need to monitor how effective these are – as the stations can also attract feral animals and predators. Fortunately, we haven’t seen any deaths from predators near the drinking stations in Gunnedah,” Dr Mella said.

To mitigate this risk, her team has now developed drinking stations that are inaccessible to ground-based predators.

“Our next steps will be to see if disease, such as chlamydia, influences koala drinking behaviour,” Dr Mella said. “And we will also monitor individual koalas to examine these drinking behaviours over a longer time period.”