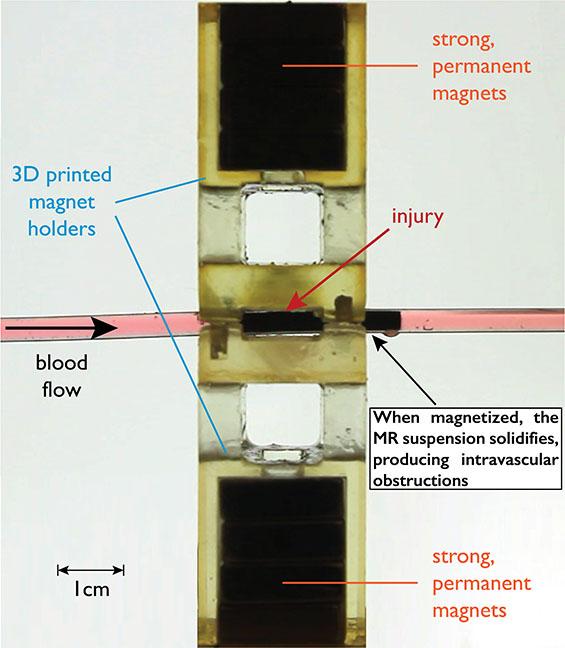 Inspired by their use in mechanical systems, Massachusetts Institute of Technology researchers are testing a magnetically-actuated fluidic valve to use in trauma patients suffering from hemorrhage.

Yonatan Tekleab and his colleagues will explain how the valve works at the American Physical Society’s Division of Fluid Dynamics 72nd Annual Meeting on Nov. 25 at the Washington State Convention Center in Seattle. The talk is part of a larger session on biological fluid dynamics for medical devices.

Approximately 80% of trauma related deaths after the first hour of admission to the hospital are due to hemorrhagic shock. Tekleab said their system of an injectable magnetorheological suspension and externally placed small magnets would be able to significantly reduce bleeding before the patient is transported to the hospital.

“Our hope is to extend patients’ survival time by at least 30 minutes by conserving blood, so that they are in a more stable condition upon arrival at a trauma center,” Tekleab said. “Studies have shown reducing blood loss has a significant impact on survival probability than administering resuscitation fluids prior to reaching a trauma care facility.”

He said the MR suspension can be infused quickly and activates almost immediately with a magnetic field, creating an obstruction to reduce or stop bleeding from an injury. Once the bleeding is stopped, the effect on blood pressure should be immediate, and the body’s vascular response will maintain blood flow to critical organs.

The MR fluid is injected upstream of the injury and carried through the bloodstream to the site of the injury, where a magnetic field can slow blood loss, stabilize blood pressure and potentially increase survival time. Tekleab said there are particular types of injuries where this MR system would not be effective.

“The MR fluid acts as a localized hemostat and is designed to halt bleeding, so it would not be helpful for non-hemorrhagic injuries, such as traumatic brain injury. Severe injuries to multiple body parts may also present a challenge if the suspension cannot be injected locally, because directing the fluid to multiple sites may be difficult,” he said. “If the patient is still in a state in which he or she can be resuscitated, this fluid may help slow bleeding to sustain life until they can be transported to a trauma care facility.”

He said it is envisioned the magnets required to activate the MR fluid would be mounted inside 3D printed holders that can be worn by field surgeons or emergency personnel to be used at the scene of the trauma.