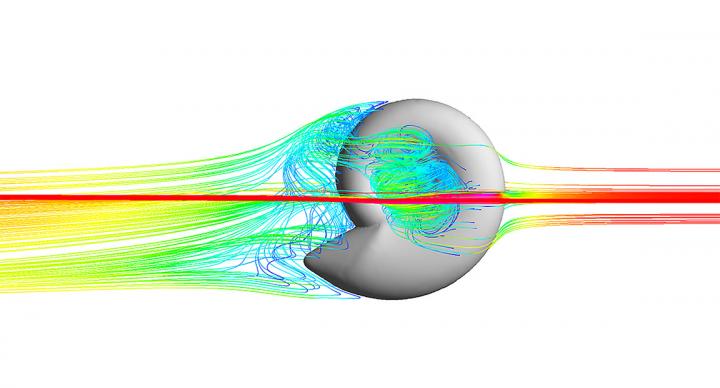 Three scientists affiliated with the University of Utah’s department of geology and geophysics will present research on the width, coil diameter and the overall structure of the prehistoric cephalopods shells and how these factors affected their swimming patterns at the American Physical Society’s Division of Fluid Dynamics 72nd Annual Meeting on Nov. 25.

Nicholas Hebdon, Kathleen Ritterbush and Yunji Choi use a computational fluid dynamics model to study the locomotion of ammonoids, a group of cephalopods that swam the oceans for almost 300 million years. They went extinct at the same time dinosaurs.

“One of the interesting and hard things about ammonoids is they don’t have any direct descendants today despite their dominance in the past,” said Hebdon. “We’re interested in what this might be able to tell us about the stability of marine ecosystems and how they recover diversity and ecological complexity after drastic extinctions. Since we can’t compare directly to modern descendants, we have to be creative about how we investigate their potential behavior and interactions.”

The scientists examined the change in size and shape of ammonoid shells by researching fossils. Shell shape and size reflected how efficiently cephalopods swam across various geological periods.

“The shapes and sizes of fossil shells we find from any given interval of geologic time – say, the early Triassic or the early Jurassic – are shells produced by whichever branch of the evolutionary tree was flourishing at that time and the shells those species could build in their particular environments,” said Hebdon.

Researching these long extinct swimmers and their adaptation into different ecosystems across millions of years is expected to shed light on the behavior of modern cephalopod ecosystem.

“With squid and octopus’ populations and harvesting efforts on the rise worldwide today, our understanding of their vulnerabilities and strength will be valuable to food source management and conservation efforts,” said Hebdon.