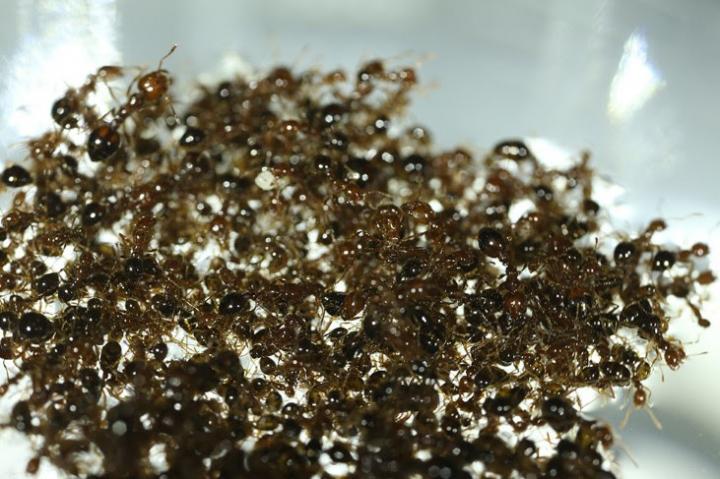 Fire ants build living rafts to survive floods and rainy seasons. Georgia Tech scientists are studying if a fire ant colony’s ability to respond to changes in their environment during a flood is an instinctual behavior and how fluid forces make them respond.

Hungtang Ko and David Hu will present the science behind this insect behavior, focusing their discussion on how the living raft changes size under various environmental conditions at the American Physical Society’s Division of Fluid Dynamics 72nd Annual Meeting on Nov. 26.

The red imported fire ant (Solenopsis invicta) can optimize its ability to repel water by linking its body together with tens of thousands of its peers to build massive floating colonies.

“We think the response is an active process. Fire ants are able to sense the change in force when different fluid conditions are applied,” Ko said.

The researchers found different fluid behaviors, such as vortexes, could change the size of the fire ant raft in several ways. They discovered rotation of water can inhibit exploratory behaviors of individual fire ants, while centrifugal motion does not influence the colony.

“Our current hypothesis is that they explore less, because they need to form a stronger bond with their neighbors. We are still working on testing the hypothesis,” Ko said. “We think the independent response in individuals is enough in leading to the system-level deformation that we observe.”

Stronger physical bonds between individual fire ants lead to durable and safer rafts. The individual ant’s ability to respond to environmental changes is crucial to the sustainability of their raft and the survival of the colony.

The session, “Shrinking spinning fire ant rafts,” will be presented at 10:31 a.m. Pacific (U.S.) on Tuesday, Nov. 26 in Room 613 as part of a session on biological fluid dynamics and collective behavior.