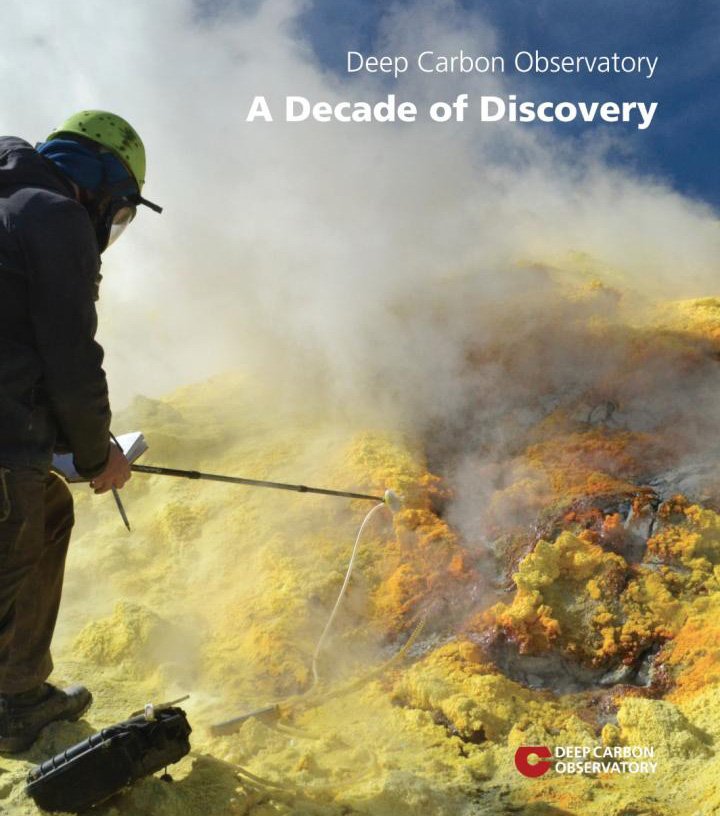 Thousands of diamonds, formed hundreds of kilometers deep inside the planet, paved the road to some of the 10-year Deep Carbon Observatory program’s most historic accomplishments and discoveries, being celebrated Oct. 24-26 at the US National Academy of Sciences.

Unsightly black, red, green, and brown specks of minerals, and microscopic pockets of fluid and gas encapsulated by diamonds as they form in Deep Earth, record the elemental surroundings and reactions taking place within Earth at a specific depth and time, divulging some of the planet’s innermost secrets.

Hydrogen and oxygen, for example, trapped inside diamonds from a layer 410 to 660 kilometers below Earth’s surface, reveal the subterranean existence of oceans’ worth of H2O – far more in mass than all the water in every ocean in the surface world.

This massive amount of water may have been brought to Deep Earth from the surface by the movement of the great continental and oceanic plates which, as they separate and move, collide with one another and overlap. This subduction of slabs also buries carbon from the surface back into the depths, a process fundamental to Earth’s natural carbon balance, and therefore to life.

Knowledge of Deep Earth’s water content is critical to understanding the diversity and melting behaviors of materials at the planet’s different depths, the creation and flows of hydrocarbons (e.g. petroleum and natural gas) and other materials, as well as the planet’s deep subterranean electrical conductivity.

By dating the pristine fragments of material trapped inside other super-deep diamond “inclusions,” DCO researchers could put an approximate time stamp on the start of plate tectonics – “one of the planet’s greatest innovations,” in the words of DCO Executive Director Robert Hazen of the Carnegie Institution for Science. It started roughly 3 billion years ago, when the Earth was a mere 1.5 billion years old.

Diamond research accelerated dramatically thanks to the creation of DCO’s global network of researchers and led to some of the program’s most intriguing discoveries and achievements.

Diamonds from the deepest depths, often small with poor clarity, are not generally used as gemstones by Tiffany’s but are amazingly complex, robust and priceless in research. Inclusions offered DCO scientists samples of minerals that exist only at extreme high subterranean pressure, and suggested three ways in which diamonds form.

While as many as 90% of analyzed diamonds were composed of carbon scientists expected in the mantle, some “relatively young” diamonds (up to a few hundred million years old) appear to include carbon from once-living sources; in other words, they are made of carbon returned to Deep Earth from the surface world.

Diamonds also revealed unambiguous evidence that some hydrocarbons form hundreds of miles down, well beyond the realm of living cells: abiotic energy.

Unravelling the mystery of deep abiotic methane and other energy sources helps explain how deep life in the form of microbes and bacteria is nourished, and fuels the proposition that life first originated and evolved far below (rather than migrating down from) the surface world.

DCO’s Extreme Physics and Chemistry community scientists used diamond anvil cells – a tool that can squeeze a sample tremendously between the tips of two diamonds, coupled with lasers that heat the compressed crystals – to simulate deep Earth’s almost unimaginable extreme temperatures and pressures.

Using a variety of advanced techniques, they analyzed the compressed samples, identified 100 new carbon-bearing crystal structures and documented their intriguing properties and behaviors.

The work provided insights into how carbon atoms in Deep Earth “find one another,” aggregate, and assemble to form diamonds and other material.

DCO’s discoveries and research are important and applicable in many ways, including the development of new materials and potential carbon capture and storage strategies.

DCO scientists are studying, for example, how the natural timescale for sequestration of carbon might be shortened.

The weathering of and microbial life inside Oman’s Samail Ophiolite – an unusual, large slab pushed up from Earth’s upper mantle long ago – offers a tutorial in nature’s carbon sequestration techniques, knowledge that might help offset carbon emissions caused by humans.

In Iceland, another DCO natural sequestration project, CarbFix, involves injecting carbon-bearing fluids into basalt and observing their conversion to solids.

A Decade of Discovery

Hundreds of scientists from around the world meet in Washington DC Oct. 24 to 26 to share and celebrate results of the wide-ranging, decade-long Deep Carbon Observatory – one of the largest global research collaborations in Earth sciences ever undertaken.

With its Secretariat at the Carnegie Institution for Science in Washington DC, and $50 million in core support from the Alfred P. Sloan Foundation, multiplied many times by additional investment worldwide, a multidisciplinary group of 1,200 researchers from 55 nations worked for 10 years in four interconnected scientic “communities” to explore Earth’s fundamental workings, including:

They met the challenge of investigating Earth’s interior in several ways, producing 1,400 peer-reviewed papers while pursuing 268 projects that involved, for example:

DCO scientists conducted field measurements in remote and inhospitable regions of the world: ocean floors, on top of active volcanoes, and in the deserts of the Middle East.

Where instrumentation and models were lacking, DCO scientists developed new tools and models to meet the challenge. Throughout these studies, DCO invested in the next generation of deep carbon researchers, students and early career scientists, who will carry on the tradition of exploration and discovery for decades to come.

In addition to insights from its diamond research above, the program’s top discoveries include:

The deep biosphere is one of Earth’s largest ecosystems

Life in the deep subsurface totals 15,000 to 23,000 megatonnes (million metric tons) of carbon, about 250 to 400 times greater than the carbon mass of all humans. The immense Deep Earth biosphere occupies a space nearly twice as large as all the world’s oceans.

DCO scientists explored how microbes draw sustenance from “abiotic” methane and other energy sources – fuel that wasn’t derived from biotic life above.

If microbes can eek out a living using chemical energy from rocks in Earth’s deep subsurface, that may hold true on other planetary bodies.

This knowledge about the types of environments that can sustain life, particularly those where energy is limited, can guide the search for life on other planets. In the outer solar system, for example, energy from the sun is scarce, as it is in Earth’s subsurface environment.

DCO researchers also found the deepest, lowest-density, and longest-lived subseafloor microbial ecosystem ever recorded and changed our understanding of the limits of life at extremes of pressure, temperature, and depth.

Rocks and fluids in Earth’s crust provide clues to the origins of life on this planet, and where to look for life on others

DCO scientists found amino acids and complex organic molecules in rocks on the seafloor. These molecules, the building blocks of life, were formed by abiotic synthesis and had never before been observed in the geologic record.

Abiotic methane forms in the crust and mantle of Earth

When water meets the ubiquitous mineral olivine under pressure, the rock reacts with oxygen atoms from the H2O and transforms into another mineral, serpentine – characterized by a scaly, green-brown, snake skin-like appearance.

This process of “serpentinization” leads to the formation of “abiotic” methane in many different environments on Earth. DCO scientists developed and used sophisticated analytical equipment to differentiate between biotic (derived from ancient plants and animals) and abiotic formation of methane.

DCO field and laboratory studies of rocks from the upper mantle document a new high-pressure serpentinization process that produces abiotic methane and other forms of hydrocarbons.

The formation of methane and hydrocarbons through these geologic, abiotic processes provides fuel and sustenance for microbial life.

Atmospheric CO2 has been relatively stable over the eons but huge, occasional catastrophic carbon disturbances have taken place

DCO scientists have reconstructed Earth’s deep carbon cycle over eons to the present day. This new, more complete picture of the planetary ingassing and outgassing of carbon shows a remarkably stable system over hundreds of millions of years, with a few notable episodic exceptions.

Continental breakup and associated volcanic activity are the dominant causes of natural planetary outgassing. DCO scientists added to this picture by investigating rare episodes of massive volcanic eruptions and asteroid impacts to learn how Earth and its climate responds to such catastrophic carbon disturbances.

Volcanoes and volcanic regions outgas carbon dioxide (CO2) into the ocean / atmosphere system at a rate of 280-360 megatonnes per year. This includes both emissions during volcanic eruptions and degassing of CO2 out of diffuse fractures and faults in volcanic regions worldwide and the mid-ocean ridge system.

Human activities, such as burning fossil fuels, are responsible for about 100 times more CO2 emissions than all volcanic and tectonic region sources combined.

The volume of outgassed CO2 relative to SO2 increases for some volcanoes days to weeks before an eruption, raising the possibility of improved forecasting and mitigating danger to humans.

DCO researchers measured volcanic outputs around the globe. Italy’s Mount Etna, for example, one of Earth’s most active volcanoes, typically spewed 5 to 8 times more CO2 than usual about two weeks before a large eruption.

Experiments and new theoretical work led to a revolutionary new DCO model of water in deep Earth and the discovery that diamonds can easily form through water-rock interactions involving organic and inorganic carbon.

This model predicted the changing chemistry of water found in fluid inclusions in diamonds and yields new insights into the amounts of carbon and nitrogen available for return to Earth’s atmosphere over deep time.

DCO scientists also discovered that the solubility of carbon-bearing minerals, including carbonates, graphite, and diamond, is much higher than previously thought in water-rock systems in the mantle.

After cataloguing known carbon-bearing minerals at Earth’s surface, their composition and where they are found, DCO researchers discovered statistical relationships between mineral localities and the frequency of their occurrence. With that model they predicted 145 yet-to-be-discovered species and in 2015 challenged citizen scientists to help find them.

Of the 31 new-to-science minerals turned up during the Carbon Mineral Challenge, two had been predicted, including triazolite, discovered in Chile and thought to have derived in part from cormorant guano. Photo below.

Through experiment and observation, DCO scientists discovered new forms of carbon deep in Earth’s mantle, shedding new light on the carbon “storage capacity” of the deep mantle, and on the role of subduction in recycling surface carbon back to Earth’s interior.

Studies also cast new light on the record of major changes in our planet’s history such as the rise of oxygen and the waxing and waning of supercontinents.

DCO research suggests that two-thirds or more of Earth’s carbon may be sequestered in the core as a form of iron carbide. This “hidden carbon” brings the total carbon content of Earth closer to what is observed in the Sun and helps us to understand the origin of Earth’s carbon from celestial material.