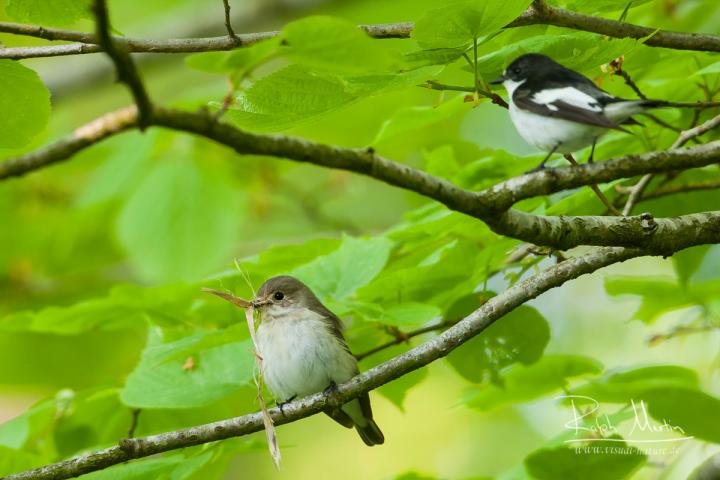 The timing of spring migration is vital for birds. Returning too late comes at a cost. In 1981, German ornithologist Eberhard Gwinner demonstrated how an internal circannual clock is responsible for the correct timing of flycatchers’ migration. Replicating this experiment more than twenty years later, Barbara Helm, University of Groningen Associate Professor of Biological Rhythms of Natural Organisms, has shown there is an evolutionary response of this clock to climate. The results were published online on 24 October by the journal Current Biology.

The pied flycatcher spends winter in Africa and returns to Europe in spring. The timing of this migration is important to ensure that the birds can take maximum advantage of a brief peak in the availability of caterpillars, their staple food. But how do these birds know when it is time to fly back? In 1981, Eberhard Gwinner took newly hatched flycatchers from their nests and hand-raised them in a laboratory, where they were observed for nearly a year.

“Gwinner measured their activity in cages shielded from the environment, for example by using switches on perches to detect movement, and he looked at things like molting and the growth of reproductive organs as signs of their normal annual cycle,” explains Helm.

When it was time to migrate, the caged birds became restless at night. Other behavioral and physiological signs associated with migration and reproduction also appeared.

“This led to the conclusion that these birds have an internal circannual clock which triggers these behaviors in response to environmental cues.”

The Gwinner experiment is a classic. So when it was clear that spring was coming earlier due to climate change, it seemed a good idea to repeat it. ‘This happened in 2002, in the original cages and with most of the original measurement devices, as well as more modern ones,’ explains Helm, who was involved in this replication experiment with Gwinner.

“It was quite unique to have both the original setup and the raw data from the first experiment,” she adds.

This allowed her to accurately compare the two experiments. Unfortunately, Gwinner passed away shortly after the experiment was completed. The lab was dismantled and the data analysis was delayed as Helm worked on a series of postdoc projects. Last year, she was appointed at the University of Groningen, which gave her time to finally write a paper on the data.

“Our hypothesis was that changes would be most profound around spring migration, as spring timing is affected most strongly by climate change,” explains Helm.

Indeed, the end of winter molting and the start of migratory restlessness had significantly advanced, by 9.3 days, as had the growth of reproductive organs (which shrink in winter). Changes associated with autumn migration were slightly delayed.

The results suggest that the circannual clock has been altered.

“However, this was seen in caged birds in a laboratory. We, therefore, wanted to compare our findings with birds in the wild.”

A colleague of Helm’s told her about a couple who had been closely observing pied flycatchers since 1973 as citizen-scientist; they had even ringed all the chicks.

“They live some 100 kilometers from the place where we caught our birds, in a similar landscape. And they had 46 years of data on reproductive timing.”

Comparisons showed that the lab results were similar to those obtained in the field: the wild flycatchers laid eggs 11 days earlier during the same time period. Dieter and Ute Hoffmann, the bird-watching couple, are named as co-authors on the paper. Relating the datasets to each other required the statistical expertise of Ph.D. student Benjamin Van Doren from the University of Oxford, who is joint first author of the publication.

The final conclusion is that there is some form of phenotypic evolution, which has led to an adaptation of the timing programs that regulate migration.

“The good news is that there is more adaptive potential than we previously thought,” says Helm.

However, she adds, it is unclear how much change this adaptive potential can bring. There are also other problems. For example, work at the University of Groningen that was published earlier this year showed that the forward shift in the arrival of flycatchers can increase deadly competition with great tits.

The replication experiment itself is now almost twenty years old – is it time for another round? That is not very likely, says Helm.

“When the Gwinner lab was closed, all the original equipment was discarded, so it’s now impossible to truly replicate the study.”