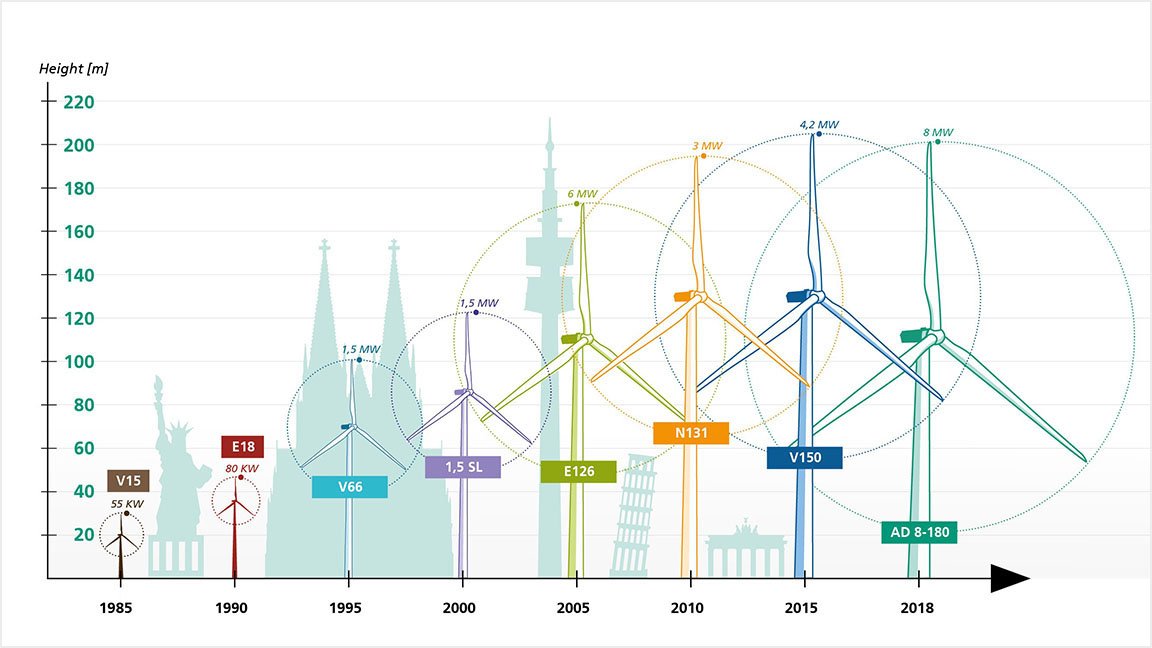 Advances in adapting the technology for cold climates and offshore use and better methods for predicting wind conditions have fanned significant growth of the use of wind turbines for electricity in the last 40 years. A new report takes stock of where the field is now and what lies ahead.

A team of researchers from Germany has published its findings in Applied Physics Reviews, from AIP Publishing, surveying the growth of wind technology as a source of renewable energy and assessing its viability for continuing to capture larger shares of the electricity market. The report notes dramatic improvements in the technology, thanks in part to economies of scale, and foresees even larger, more cost-effective turbines in the future.

“The size of a state-of-the-art turbine is extremely impressive. The swept area of the rotor of a standard turbine is now twice the size of a football field,” said Berthold Hahn, one of the authors of the paper.

“In parallel to the development in size, the technology has also become mature, meaning cost-effective and reliable.”

Since the 1970s, wind turbines have improved to generate at least 100 times more power than their predecessors. Current large turbines each have the capacities to generate roughly 5 megawatts. Hahn said market expectations for future turbine capacity reach up to 10 to 15 megawatts. Some of these larger turbines might have rotor diameters up to 200 meters long.

During this time, the cost to produce electricity from wind has plummeted from $500 per megawatt-hour to $50.

“The technical developments, like floating offshore turbines enabling the harvest of wind energy in very deep waters, integrated control strategies considering the needs of the grid, and artificial intelligence permanently assessing the performance of the turbines, have contributed to the impressive cost reductions,” Hahn said.

Even then, the wind power industry faces continued pressure to reduce costs. The report identified a key area, finding more economical ways to maintain the turbines. Work that draws together historical maintenance data and real-time measurements from turbines is needed to detect turbine failures earlier.

With improvements to other parts of the power grid, such as power storage, Hahn foresees wind technology becoming crucial for responding to the electricity supply and demand volatility that markets experience.

“In many countries, wind energy has started to take over tasks of stabilizing the grid from large conventional plants, meaning that the energy systems are now eventually changing from a mainly centralized structure to a decentralized one,” he said.