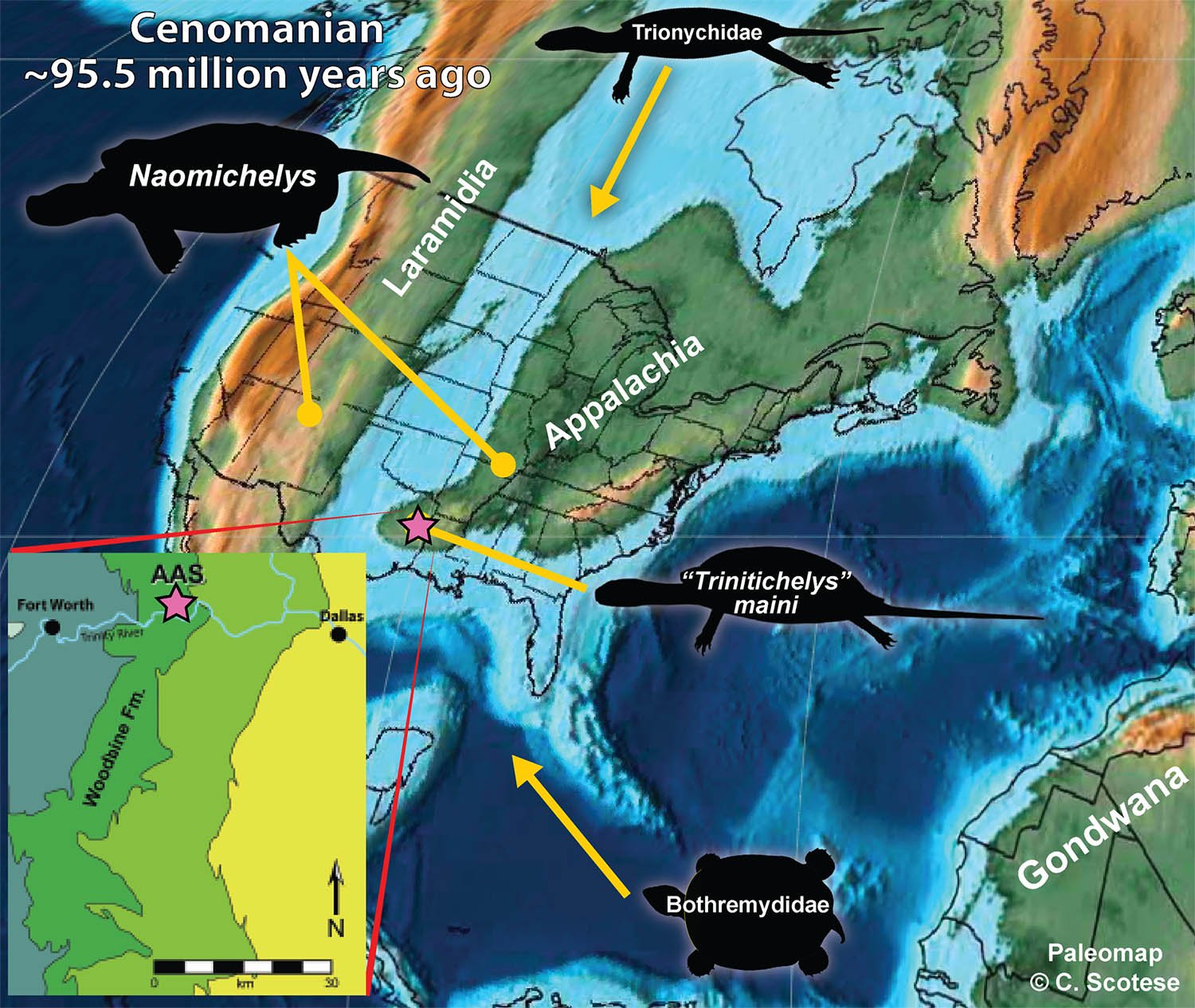 The Arlington Archosaur Site (AAS) of Texas preserves remnants of an ancient Late Cretaceous river delta that once existed in the Dallas-Fort Worth area. Known for discoveries of fossil crocodiles and dinosaurs, a multi-institution research team has described four extinct turtle species, including a new river turtle named after AAS paleontologist Dr. Derek Main and the oldest side-necked turtle in North America. These new turtles include an intriguing combination of native North American forms alongside Asian and Southern Hemisphere immigrants, suggesting extensive intercontinental migration of turtles during this time.

Originally discovered by amateur fossil hunter Art Sahlstein in 2003, the AAS is a prolific fossil locality found in the middle of a suburban subdivision. The AAS preserves remnants of an ancient Late Cretaceous river delta around 96 million years ago in what is today the Dallas-Fort Worth area. It preserves a record of a freshwater wetland that sat near the shore of a large peninsula, including a diverse assemblage of crocodile relatives, dinosaurs, amphibians, mammals, fish, invertebrates, and plants, several of which are also new species awaiting description.

“Until this discovery, there were very few turtle fossils from this time period discovered in Appalachia,” says Dr. Heather Smith, one of the authors of the paper.

“The AAS turtle assemblage informs a growing understanding of Appalachian ecosystems in the mid-Cretaceous, most of which were obscured by later erosion along coasts and extensive continental river drainages,” said Brent Adrian, the lead author of the study, published in the current issue of the online journal Palaeontologia Electronica.

One new species – “Trinitichelys” maini – is a baenid turtle, an extinct lineage of aquatic North American turtles that persisted from the Early Cretaceous through the Eocene. These turtles were medium-sized (about the size of a modern snapping turtle), had heavily fused bones and shells, and occupied freshwater river habitats. “Trinitichelys” maini is the oldest member of the group found in the eastern North American subcontinent of Appalachia, which at that time was separated from Laramidia, the western sub-continent of North America.

“T.” maini honors the late Dr. Derek Main, the first director of the AAS project, who recognized the scientific potential of the site.

“Derek’s incredible work with the community led to the creation of one of the most extensive and diverse collections of mid-Cretaceous fossils known in Texas,” says Dr. Chris Noto, who took over as director of the AAS in 2013, “He was an inspiration to all those who worked with him, and it is only fitting this new species is named after him.”

Alongside T. maini, the study describes three more intriguing new turtles from the AAS. One species represents the oldest side-necked (pleurodire) turtle discovered in North America. Side-necked turtles originated in the Southern Hemisphere, and the AAS marks the first time they are found in North America. Yet another surprise is an early soft-shelled turtle (trionychid), which belongs to a lineage that immigrated from Asia. Adding to this unusual mix is Naomichelys sp., a large semi-aquatic turtle with unusual tubercles (raised bumps) on its shell that is a relict North American species typically found in much older rocks. This combination of turtle species in one location is unique, as it includes Asian, Southern Hemisphere, and native North American forms, and both young and older, relict taxa.