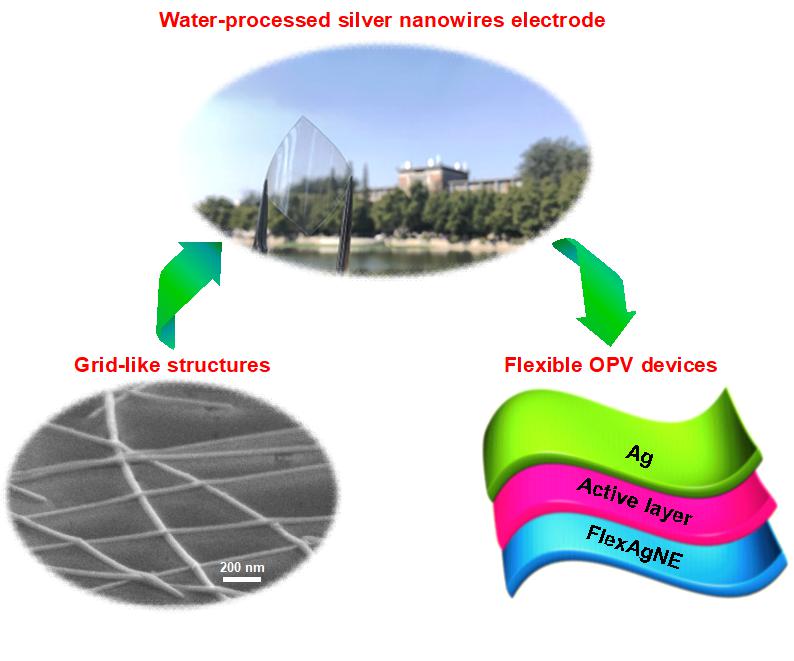 To fully materialize the potential of organic electronic devices is to have their performance on flexible substrates as same as that on rigid substrate such as glass. However, the performance of flexible organic optoelectronic devices still lags behind the performance of devices on rigid substrates. This is due, in particular, to the lack of high-performance flexible transparent electrodes (FTEs) with combined required properties simultaneously (including a facile but effective approach, low resistance, high transmittance, smooth surface, good stability, and superior flexibility), rather outstanding performance only in some aspects but others very limited. Achieving all the above requirements is still a huge challenge for FTEs area.

FTEs can be fabricated using dry (such as vacuum deposition) and wet (solution processes such as slot die, ink-jet/nano printing, and electrospinning) methods. Solution process is clearly more favorable due to its good compatibility with the roll-to-roll processing of organic electronics. However, it is still a challenge to address the issue of inhomogeneous distribution or aggregation of conducting substance (such as nanowires in suspension), which results in electrodes with high percolation threshold and large surface roughness, and, ultimately, an overall low combined performance.

In this study, using a polyelectrolyte, we have created a FTE (named FlexAgNE) with combined excellent features together through a water-processed procedure. A homogeneously dispersed and stable water suspension of AgNWs could be formed with poly(sodium 4-styrenesulfonate) (PSSNa) as the polyelectrolyte. Due to the ionic electrostatic charge repulsion between the PSSNa and AgNWs, a uniform film on PET with grid-like structures could be obtained from the above water suspension. The FlexAgNE offers remarkable combined opto-electrical properties, i.e. a sheet resistance of around 10  sq-1 and a transmittance of around 92% transmittance (excluding the substrate)), film uniformity, smoothness and flexibility simultaneously.

The FlexAgNEs was then used to fabricate organic photovoltaic devices (OPVs) to illustrate its potential as FTEs in organic electronics. The flexible OPV devices exhibited excellent and comparable performance as those on the commercial rigid indium tin oxide electrodes. With this, the flexible single-junction and tandem devices achieve champion power conversion efficiencies of 13.1% and 16.5%, respectively. Our flexible electrodes would also be of use in other flexible organic electronic devices, including LEDs and transistors and etc.