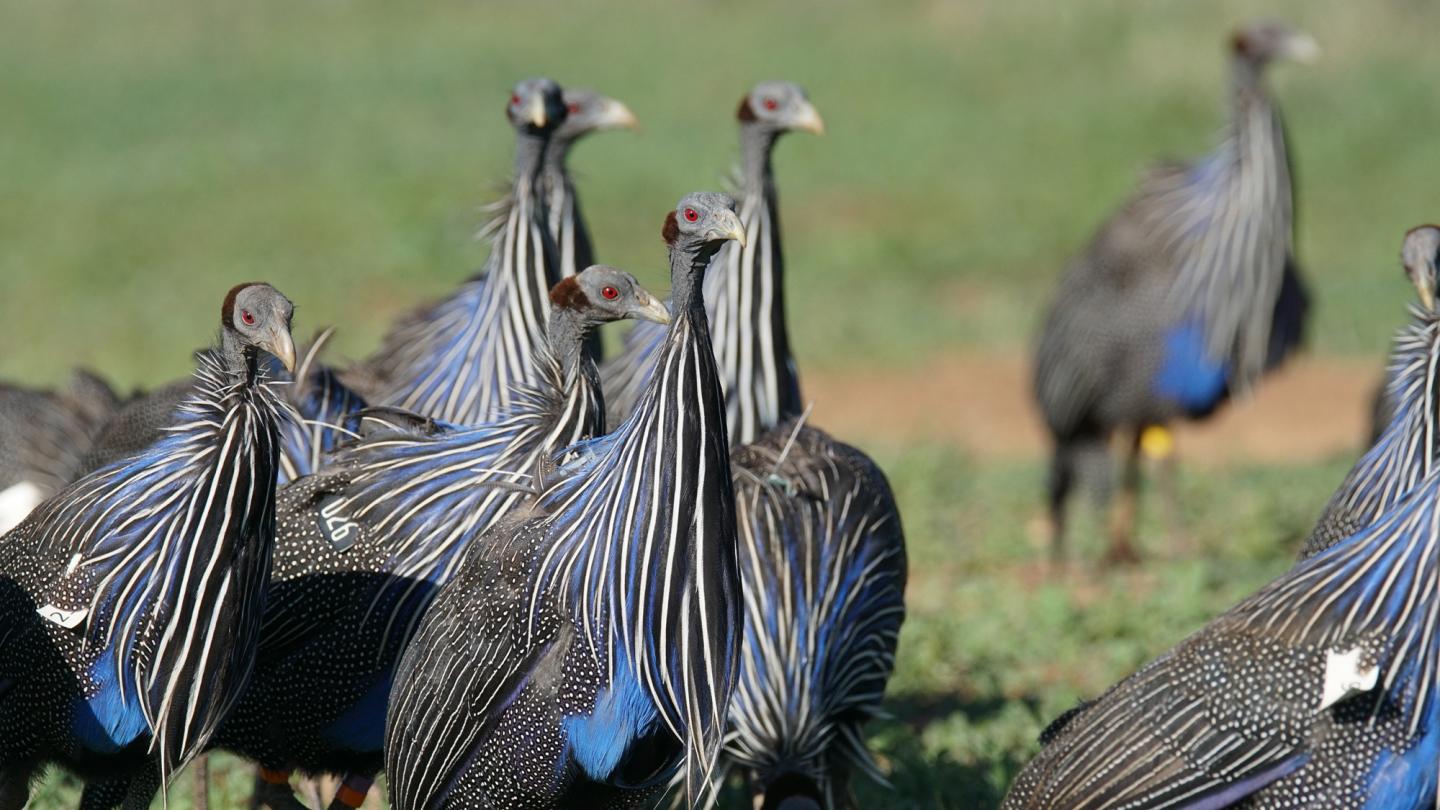 Multilevel societies have, until now, only been known to exist among large-brained mammals including humans, other primates, elephants, giraffes, and dolphins. Now, scientists from the Max Planck Institute of Animal Behavior in Konstanz and the University of Konstanz report the existence of a multilevel society in a small-brained bird, the vulturine guineafowl (Acryllium vulturinum). The study, published in the current issue of Current Biology, suggests that the birds can keep track of social associations with hundreds of other individuals – challenging the notion that large brains are a requirement for complex societies and providing a clue as to how these societies evolved.

Multilevel societies occur when social units, such as pairs, of animals form groups that have stable membership, and these groups then associate preferentially with specific other groups. Because this requires the animals to keep track of individuals in both their own and other groups, the assumption has long been that multilevel societies should only exist in species with the intelligence to cope with this complexity. While many bird species live in groups, these are either open, lacking long-term stability, or highly territorial, lacking associations with other groups.

Vulturine guineafowl, however, present a striking exception: the researchers observed these birds, that are from an ancient lineage resembling dinosaurs more than birds, behaving highly cohesively without exhibiting the signature intergroup aggression that is common in other group-living birds. And they can manage this despite having a relatively small brain, even relative to other birds.

“They seemed to have the right elements to form complex social structures, and yet nothing was known about them,” says Danai Papageorgiou, lead author on the paper and a PhD student at the Max Planck Institute of Animal Behavior.

The study, which is the first ever conducted on the species, involved tracking social relationships over the course of multiple seasons in a population of over 400 adult birds in a field site in Kenya. The researchers individually marked all birds in the population, and by observing them they discovered that the population comprised 18 distinct social groups (with 13 to 65 individuals in each). What struck the researchers is that these groups remained stable, despite regularly overlapping with one or more other groups both during the day and at night-time roosts. To see if these groups preferentially associated with one another, the researchers attached GPS tags to a sample of individuals in each group. This meant that the position of every single group was recorded continuously each day, which allowed researchers to simultaneously observe how all 18 groups in the population were interacting. The researchers found that groups associated with each other based on preference, rather than random encounters, and also showed that intergroup associations were more likely to take place during specific seasons and around particular physical features in the landscape.

“To our knowledge, this is the first time a social structure like this has been described for birds,” says Papageorgiou. “It is remarkable to observe hundreds of birds coming out of a roost and splitting up perfectly into completely stable groups every single day. How do they do that? It’s obviously not just about being smart.”

Despite being understudied, guineafowl have challenged our understanding of how sociality has evolved. “This discovery raises a lot of questions about the mechanisms underlying complex societies and has opened up exciting possibilities of exploring what is it about this bird that has made them evolve a social system that is in many ways more comparable to a primate than to other birds.” says Dr Damien Farine, senior author on the paper and a Principal Investigator at the Max Planck Institute of Animal Behavior and the Cluster of Excellence Centre for the Advanced Study of Collective Behaviour at the University of Konstanz.