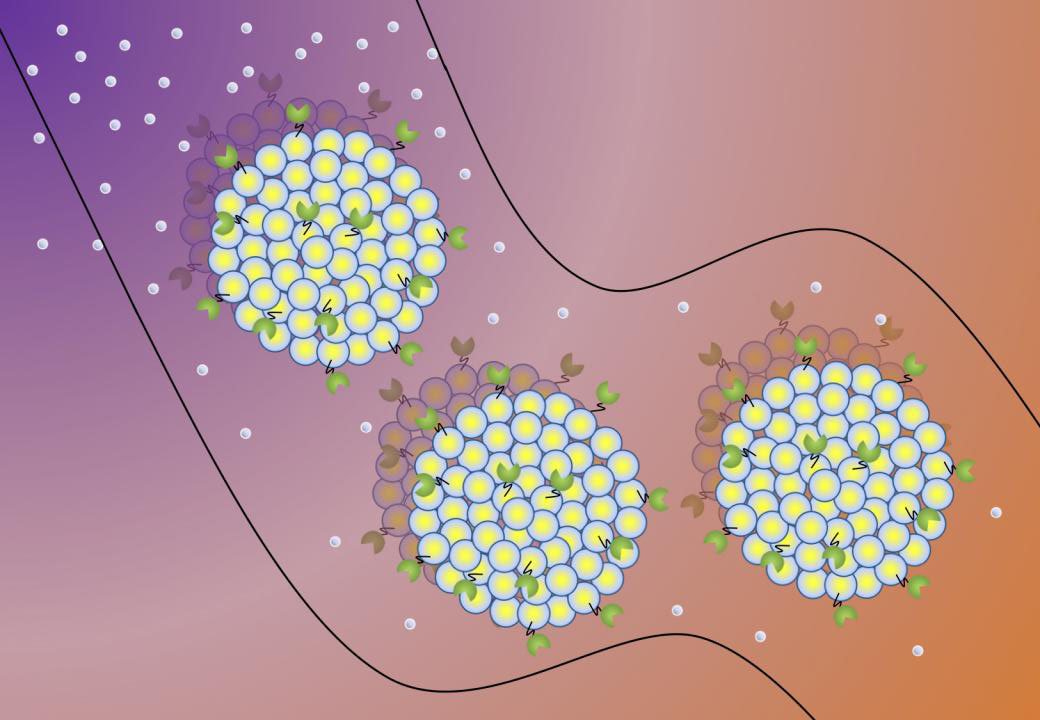 Synthetic protocells can be made to move toward and away from chemical signals, an important step for the development of new drug-delivery systems that could target specific locations in the body. By coating the surface of the protocells with enzymes – proteins that catalyze chemical reactions – a team of researchers at Penn State was able to control the direction of the protocell’s movement in a chemical gradient in a microfluidic device. A paper describing the research appears November 18, 2019 in the journal Nature Nanotechnology.

“The futuristic vision is to have drugs delivered by tiny ‘bots’ that can transport the drug to the specific location where it is needed,” said Ayusman Sen, the Verne M. Willaman Professor of Chemistry at Penn State and the leader of the research team. “Currently, if you take an antibiotic for an infection in your leg, it diffuses throughout your entire body. So, you have to take a higher dose in order to get enough of the antibiotic to your leg where it is needed. If we can control the directional movement of a drug-delivery system, we not only reduce the amount of the drug required but also can increase its speed of delivery.”

One way to address controlling direction is for the drug-delivery system to recognize and move towards specific chemical signals emanating from the infection site, a phenomenon called chemotaxis. Many organisms use chemotaxis as a survival strategy, to find food or escape toxins. Previous work had shown that enzymes undergo chemotactic movement because the reactions they catalyze produce energy that can be harnessed. However, most of that work had focused on positive chemotaxis, movement towards a chemical. Until now, little work had been done looking at negative chemotaxis. “Tunable” chemotaxis – the ability to control movement direction, towards and away from different chemical signals – had never been demonstrated.

The researchers make uniformly sized protocells, tiny sacs called liposomes that have the same components that make up natural cells. They can then attach different enzymes to the outer surface of these protocells. The enzymes they used for this study were catalase, urease, and ATPase. These enzymes convert specific reactants to products; catalase for example converts hydrogen peroxide into water and oxygen.

“We place the enzyme-coated liposomes in a microfluidic device that maintains a gradient of either the enzyme’s reactant or its products,” said Ambika Somasundar, a graduate student at Penn State and the first author of the paper. “We can then measure the movement of the liposomes towards or away from specific chemicals.”

“To effectively deliver drugs, you need two things: the ability to carry the drug and the ability to precisely control movement,” said Sen. “The interior of the protocells that we use can be filled with a payload and we are now getting closer to finely controlling their movement.”