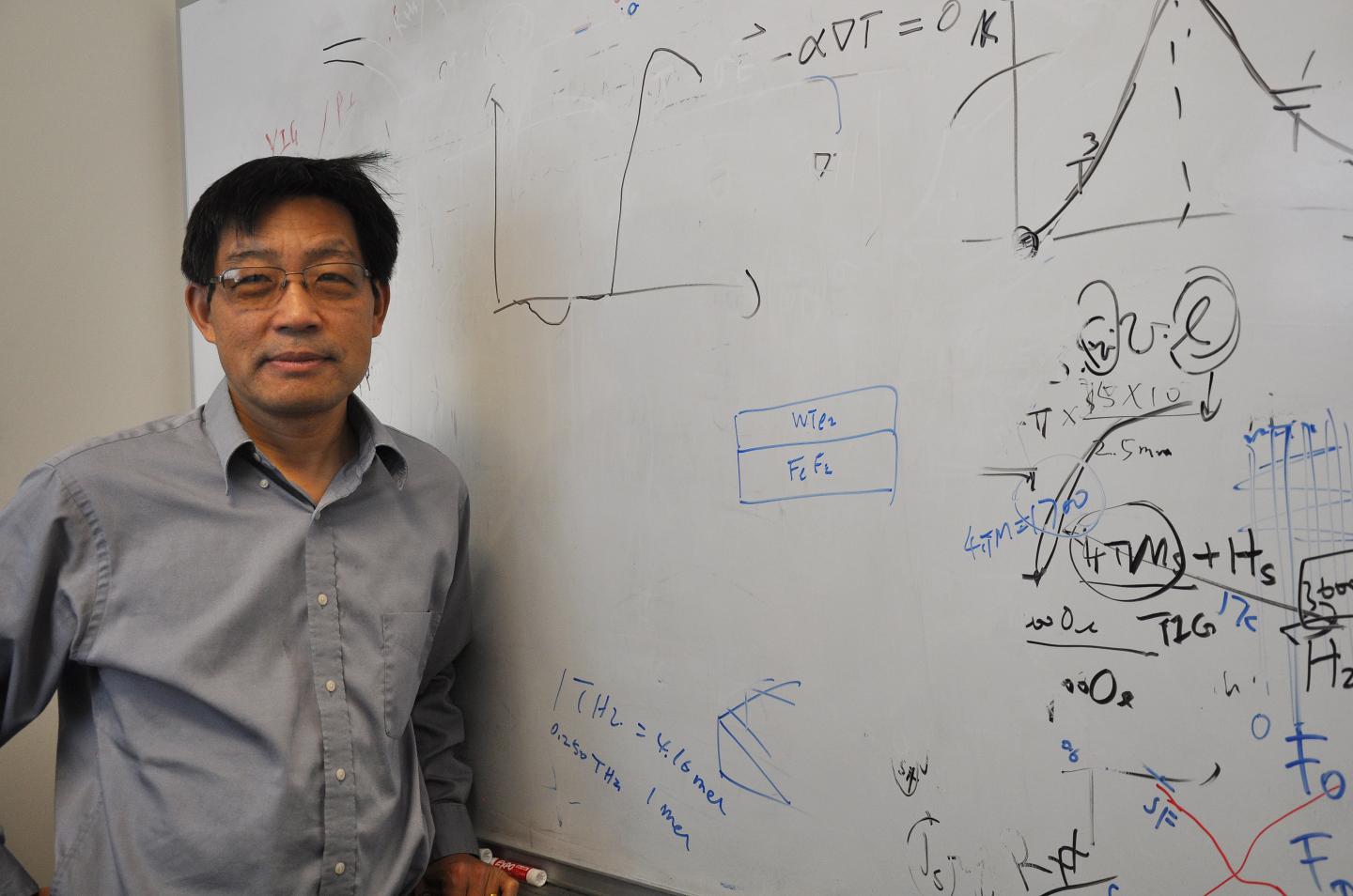 A team of physicists has discovered an electrical detection method for terahertz electromagnetic waves, which are extremely difficult to detect. The discovery could help miniaturize the detection equipment on microchips and enhance sensitivity.

Terahertz is a unit of electromagnetic wave frequency: One gigahertz equals 1 billion hertz; 1 terahertz equals 1,000 gigahertz. The higher the frequency, the faster the transmission of information. Cell phones, for example, operate at a few gigahertz.

The finding, reported today in Nature, is based on a magnetic resonance phenomenon in anti-ferromagnetic materials. Such materials, also called antiferromagnets, offer unique advantages for ultrafast and spin-based nanoscale device applications.

The researchers, led by physicist Jing Shi of the University of California, Riverside, generated a spin current, an important physical quantity in spintronics, in an antiferromagnet and were able to detect it electrically. To accomplish this feat, they used terahertz radiation to pump up magnetic resonance in chromia to facilitate its detection.

The electron has a built-in spin angular momentum, which can precess the way a spinning top precesses around a vertical axis. When the precession frequency of electrons matches the frequency of electromagnetic waves generated by an external source acting on the electrons, magnetic resonance occurs and is manifested in the form of a greatly enhanced signal that is easier to detect.

In order to generate such magnetic resonance, the team of physicists from UC Riverside and UC Santa Barbara worked with 0.24 terahertz of radiation produced at the Institute for Terahertz Science and Technology’s Terahertz Facilities at the Santa Barbara campus. This closely matched the precession frequency of electrons in chromia. The magnetic resonance that followed resulted in the generation of a spin current that the researchers converted into a DC voltage.

“We were able to demonstrate that antiferromagnetic resonance can produce an electrical voltage, a spintronic effect that has never been experimentally done before,” said Shi, a professor in the Department of Physics and Astronomy.

“Spin dynamics in antiferromagnets occur at a much shorter timescale than in ferromagnets, which offers attractive benefits for potential ultrafast device applications,” Shi said.

Shi’s team developed a bilayer structure comprised of chromia, an antiferromagnetic insulator, with a layer of metal on top of it to serve as the detector to sense signals from chromia.

Shi explained that electrons in chromia remain local. What crosses the interface is information encoded in the precessing spins of the electrons.

“The interface is critical,” he said. “So is spin sensitivity.”