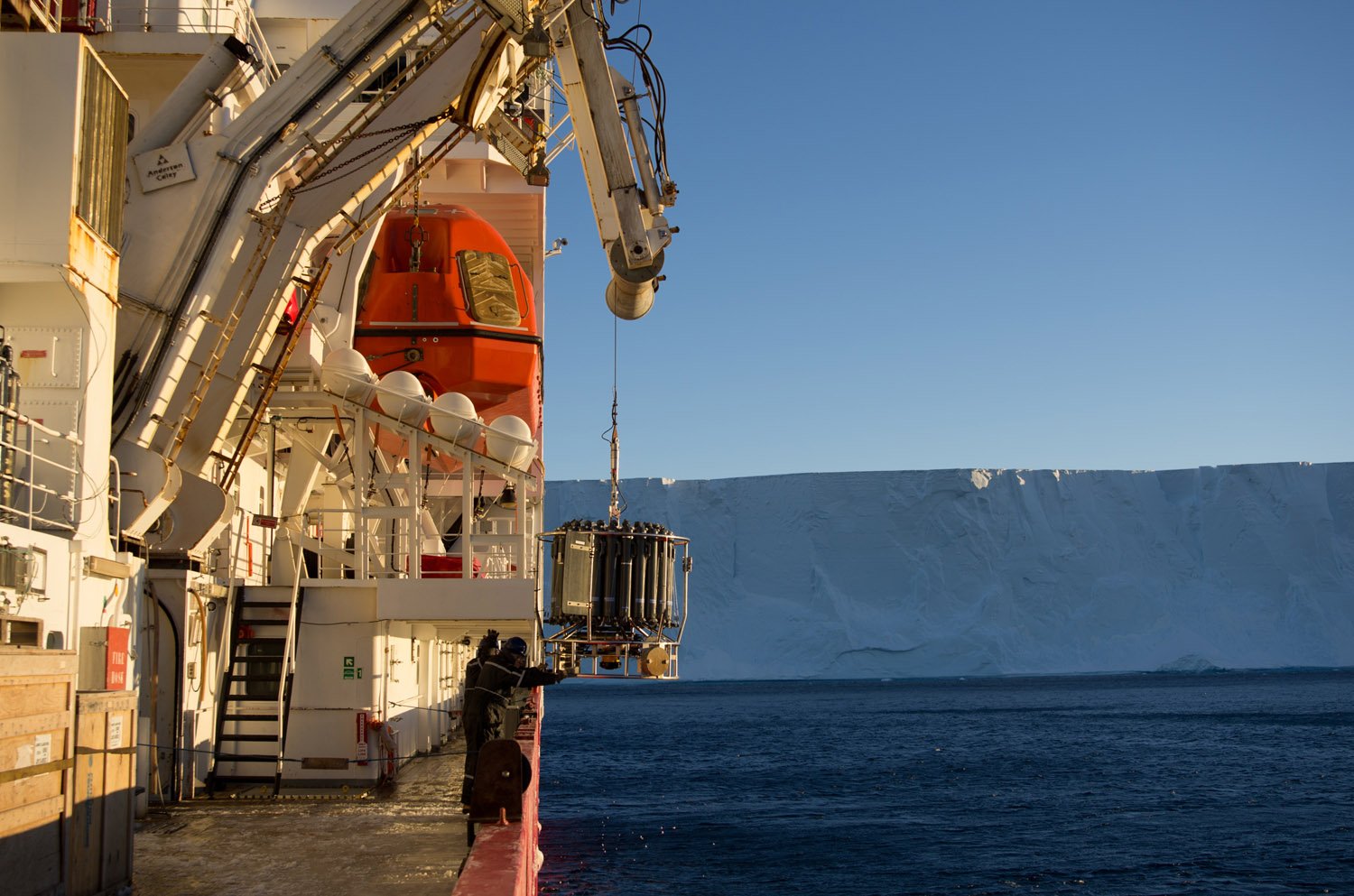 The supply of dense Antarctic water from the bottom of the ocean to the Atlantic has declined in recent years. However, a new study explains for the first time how since 2014 this has stabilized and slightly recovered due to the variability in upstream dense waters, with implications for the global climate. The study, led by British Antarctic Survey, is published this week (2 September 2019) in the journal Nature Climate Change.

Seawater that has been cooled around Antarctica sinks to the bottom of the ocean forming Antarctic Bottom Water, which can be found across the deepest parts of most of the World Ocean. The volumes of the denser subsets of this water mass have been decreasing in the Scotia Sea, a key pathway from the Weddell Sea toward the rest of the global ocean over the last decades.

Using ship-based measurements of temperature and salinity (saltiness) spanning thirty years from British, German, and US research cruises from 1989-2018, researchers have tracked the changes in the Scotia Sea, and attribute them to changes happening upstream in the Weddell Sea, closer to Antarctica, possibly due to changes in winds, sea ice formation, or glacial ice melt on the continental margins.

These observations shed light on the links between the deep ocean near Antarctica and the large-scale global ocean circulation, which prevents rapid surface climate change by trapping a large portion of human-produced carbon and warming in the deep ocean. Reduced density of deep water (caused by warmer temperatures and increased ice melt) is associated with a weakening of this ocean circulation, with implications for global climate.

Lead author Dr Povl Abrahamsen, oceanographer at British Antarctic Survey, says: “The deep oceans have been warming across much of the world for decades, so we were surprised to suddenly see this trend reversing and stabilising in the Scotia Sea. While we do not know if this marks a reversal in the observed trends or merely a hiatus in the decline, this calls for better understanding of the ocean processes in the formation regions of these water masses nearer Antarctica”.

Co-author Dr Kurt Polzin, oceanographer at Woods Hole Oceanographic Institution, says: “This region, the Scotia Sea, is unique in that it hosts several different physical mechanisms which launder dense water to make it lighter within a relatively small basin (the Southern Scotia Sea). This small basin relative to a relatively large volume transport enables researchers to assess changes in water mass production ultimately coming from the Antarctic Shelves on a biennial basis, compared to decadal time scales from other sections.”

Co-author Dr Andrew Meijers, Polar Oceans deputy science leader at British Antarctic Survey, says: “This is an exciting result that has emerged from a valuable long-term monitoring effort in the South Atlantic. This is the first time that anyone has observed significant changes in the downward trend of these deep water volumes and shows that even the very deep ocean can change on quite rapid timescales. The surprising recovery suggests that we should be making a much greater effort in observing and understanding the regions around the Antarctic where these waters are formed, so that we can predict how they may respond to ongoing climatic shifts.”

Co-author Prof Alberto Naveira Garabato from the University of Southampton, says: “Our findings suggest that the widespread changes in climate that are affecting Antarctica and the surrounding Southern Ocean may hold surprising twists with important global implications. We must continue to raise our game in observing and modelling the Southern Ocean climate system in order to be able to predict these major events in the mid-term future.”

The research was carried out as part of the UK Natural Environment Research Council (NERC)-funded projects Dynamics of the Orkney Passage Outflow (DynOPO) and Ocean Regulation of Climate by Heat and Carbon Sequestration and Transports (ORCHESTRA), with additional support from projects funded by the US National Science Foundation and National Oceanic and Atmospheric Administration.