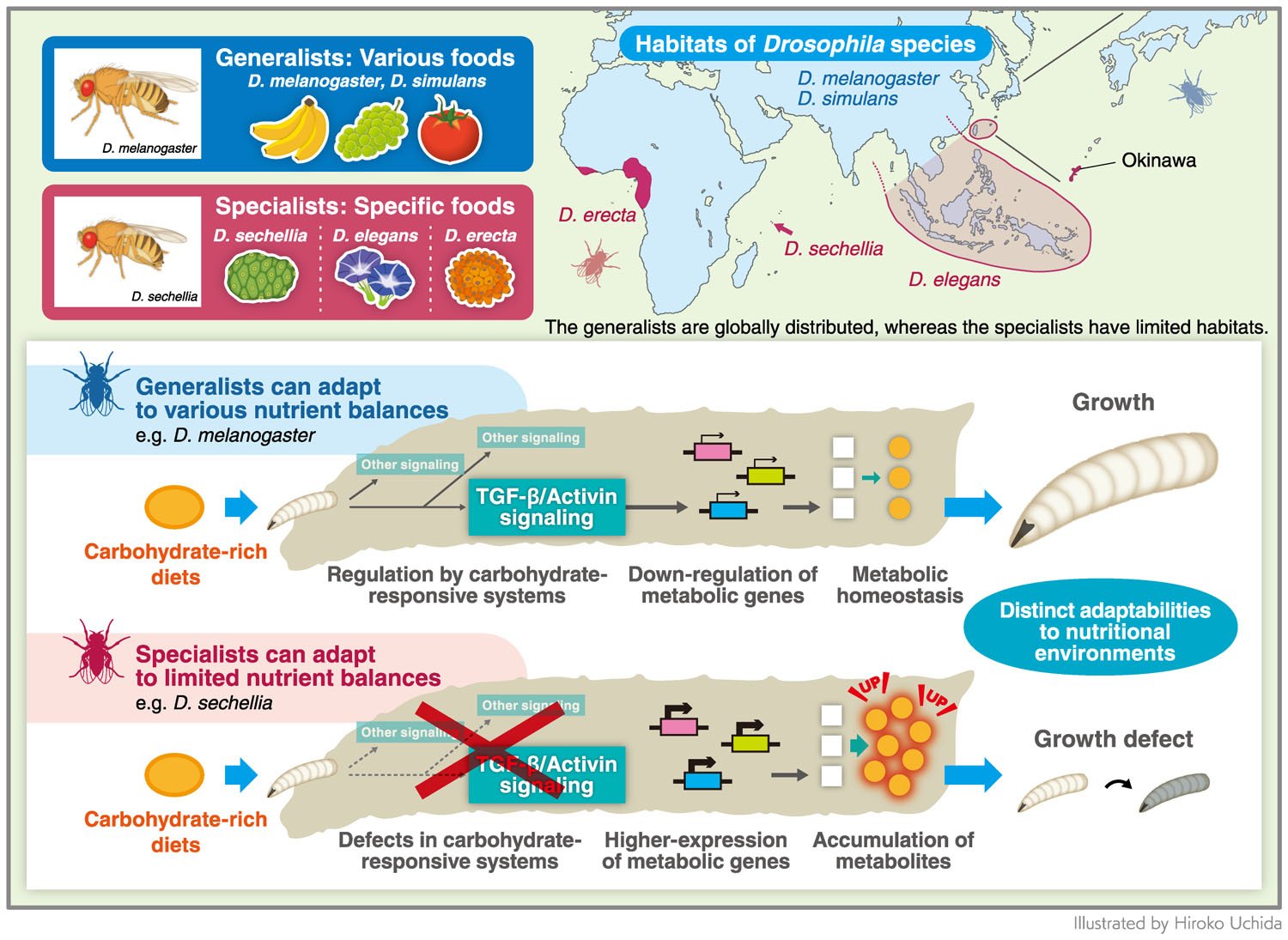 Say hello to the common fruit fly: a regular guest in all our homes, feasting on that banana peel you tossed into the garbage a few days ago.

Despite their name, it’s not just fruit they fly to; these insects will feed on various kinds of plant matter. In a paper published in Cell Reports scientists describe that this diversity in diet stems from their flexible response to carbohydrates, giving us insight into how we humans evolved what we eat.

The fruit fly, or Drosophila melanogaster, maybe a nuisance to some, but to scientists they are the backbone of Genetics, and have provided answers on how genes operate in our bodies. Like the fruit fly, humans can also eat a wide range of food resources. We are known as ‘nutritional generalists’.

On the other hand, some genetic cousins of the fruit fly are known as ‘nutritional specialists’ and can only grow on very specific plants. Many questions remain as to how organisms – even within the same genetic family – have such differences in feeding habits.

“Uncovering the differences in the molecular mechanisms between nutritional generalists and specialists can help us understand how organisms adapt to variable nutritional environments,” explain Kaori Watanabe and Yukako Hattori of Kyoto University’s Graduate School of Biostudies who lead the study. “In our investigation, we changed the nutrient balance in the food of different Drosophila species and compared their nutritional adaptability along with their transcriptional and metabolic responses.”

The team began by examining whether larvae of generalists and specialists could adapt to three experimental diets: high protein, high carbohydrate, and ‘medium’ protein-carbohydrate. As expected, generalist flies – including the common fruit fly – grew under all diets. Larvae of specialists on the other hand could not survive on carbohydrate-rich conditions.

These specialists are known to eat and reproduce on specific fruits or flowers, and examining the nutritional profiles of their native diets showed that they live on low-carbohydrates. Looking at this, the team hypothesized that the difference between the flies lies in the genetic pathways that control their response to carbohydrates itself.

“A signaling pathway known as ‘TGF-β/Activin signaling’ regulates the body’s response to carbohydrates. In the generalists, this pathway is quite flexible and maintains metabolic homeostasis under different diets. In fact, there are about 250 metabolic genes that are downregulated when their diet is carbohydrate-rich,” they explain.

In contrast, a specialist expressed these genes at higher levels, where they accumulated metabolites, culminating in reduced adaptation. The same lack of adaptation was also found when a gene in the TGF-β/Activin pathway, named dawdle, is disabled in the common fruit fly.

The results suggest that the generalists evolutionarily retained the robust carbohydrate-responsive systems through genome-environment interactions, whereas specialists lost them in consistent low-carbohydrate environments.

The research team concludes, “considering that humans and flies share a number of genes and regulatory factors, we can begin to develop an interspecies comparative approach that provides an informative model system for addressing the genetic variability among humans in response to dietary intakes.”