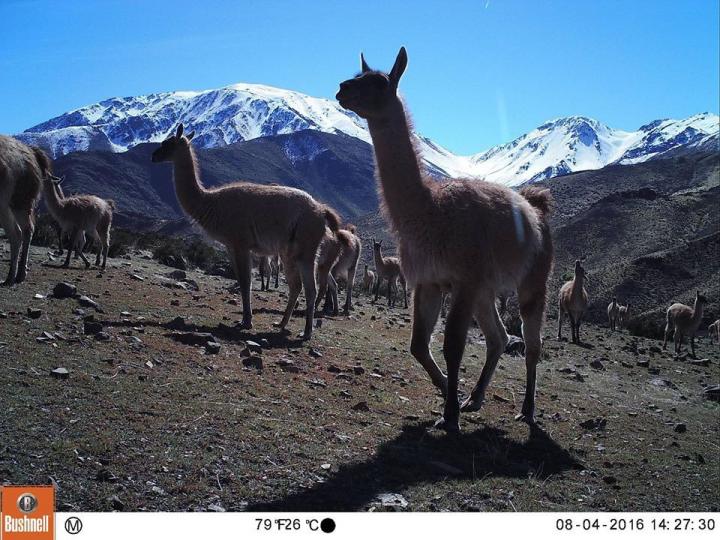 Scientists from the University of La Serena, Newcastle University, UK, and the Pontifical Catholic University of Chile surveyed ranchers to find out what they thought were the drivers of conflict between people and guanacos (a wild camelid species closely related to the Llama).

Ranchers blamed the increased aridity for reducing the availability of pasture, which meant there was more competition for grazing between livestock and guanacos.

As the area became drier, guanacos were thought to come down from the mountains in search for better grazing, coming into conflict with the herds of cattle.

To reduce this problem, some ranchers wanted to cull the guanacos to protect their livestock.

Traditional ranchers in central Chile use summer pastures in the Andes Mountain, where livestock graze in areas shared with wildlife.

It is here that, in the last few years, conflicts have intensified between people grazing their livestock and the State Services that protect wildlife due to differences in how these groups want wildlife to be managed.

Farmers accuse guanaco (Lama guanicoe), a native and IUCN-listed Vulnerable herbivore, of competing for pastures with livestock, which farmers believe has intensified in recent years due to the increase of guanaco population in the summers grazing pastures of the Province of Petorca, in the Region of Valparaíso.

Solange Vargas, the lead author based at the University of La Serena, says: “The problem was more complex than it initially seemed. At first glance, it appeared that farmers were accusing only guanaco as a cause of pasture competition. But there was a key element that ultimately caused competition for pastures: climate change.”

Farmers claimed that the cause of all changes in the mountain range was ultimately caused by climate change, including what would eventually be reflected in a problem by competition for pastures.

Dr Niki Rust, from Newcastle University, and one of the study’s authors, adds: “As climate change begins to alter our environments, we are already seeing increased competition for resources between people and wildlife. The bush fires in Australia, widely claimed to have increased in severity this year due to climate change, have resulted in humans and wild animals competing for scarce water. These human-wildlife conflicts will likely worsen as global temperatures rise, which is why it is so important that we act now to limit greenhouse gas emissions – to benefit people and wildlife.”

Pablo Castro-Carrasco from the University of La Serena and one of the study’s authors says that “understanding farmers’ beliefs are key, because beliefs guide behaviour. Subjective theories are important to understand in conservation context because they can inhibit or prevent people’s behaviour from changing. In this study, we have seen that the lay knowledge of farmers is very important to help us search for solutions to allow for coexistence between guanacos with human activities.”

The conservation conflict between guanaco and livestock is also a reflection of other deeper demands.

Vargas explains that “where farmers claim to have been abandoned by the State and its public policies, they feel relegated to second place over vulnerable wild species, which they convey to the State through complaints about the species. We hope this study help people consider that when analyzing these types of complex social-ecological problems, considering the ecological knowledge of local communities is paramount.”

Rust concludes that “because human behaviour is more often driven by perceptions of reality rather than reality itself, we should spend more time trying to understand how people think the world works and basing conservation interventions on these perceptions, rather than focusing exclusively on education as a way to change behaviour.”