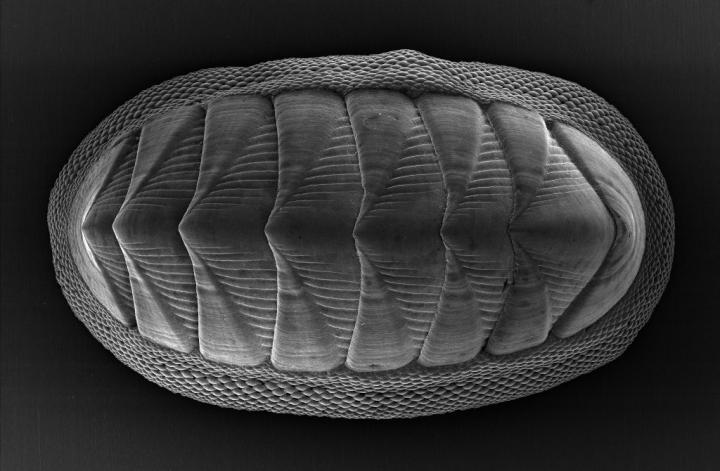 The motivations for using biology as inspiration to engineering vary based on the project, but for Ling Li, assistant professor of mechanical engineering in the College of Engineering, the combination of flexibility and protection seen in the chiton mollusk was all the motivation necessary.

“The system we’ve developed is based on the chiton, which has a unique biological armor system,” Li said. “Most mollusks have a single rigid shell, such as the abalone, or two shells, such as clams. But the chiton has eight mineralized plates covering the top of the creature and around its base it has a girdle of very small scales assembled like fish scales, that provide flexibility as well as protection.”

Li’s work, which was featured in the journal Nature Communications Dec. 10, is the result of a collaboration with researchers from various institutions, including the Massachusetts Institute of Technology, the Dana-Farber Cancer Institute at the Harvard Medical School, California State University, Fullerton, the Max Planck Institute of Colloids and Interfaces, Germany, and the Wyss Institute for Biologically Inspired Engineering at Harvard University.

Because the mechanical design of the chiton’s girdle scales had not been studied in-depth before, the team of researchers needed to start with basic material and mechanical analysis with the mollusk before using that information as the bio-inspiration for the engineering research.

“We studied this biological material in a very detailed way. We quantified its internal microstructure, chemical composition, nano-mechanical properties, and three-dimensional geometry. We studied the geometrical variations of the scales across multiple chiton species, and we also investigated how the scales assemble together through 3D tomography analysis,” Li said.

The team then developed a parametric 3D modeling methodology to mimic the geometry of individual scales. They assembled individual scale units on either flat or curved substrates, where the scales’ sizes, orientations, and geometries can also be varied, and used 3D printing to fabricate the bio-inspired scale armor models.

“We produced the chiton scale-inspired scale assembly directly with 3D multi-material printing, which consists of very rigid scales on top of a flexible substrate,” Li explained.

With these physical prototypes of controlled specimen geometries and sizes, the team conducted direct mechanical testing on them with controlled loading conditions. This allowed the researchers to understand the mechanisms behind the dual protection-flexibility performance of the biological armor system.

The way the scale armor works is that when in contact with a force, the scales converge inward upon one another to form a solid barrier. When not under force, they can “move” on top of one another to provide varying amounts of flexibility dependent upon their shape and placement.

“The strength comes from how the scales are organized, from their geometry,” Li said. “Reza’s [Mirzaeifar, assistant professor of mechanical engineering] team has done an amazing job by using computational modeling to further reveal how the scale armor becomes interlocked and rigid when the external load reaches a critical value.”

The design of place-specific armor takes into account the size of scales used. Smaller scales, such as those around the girdle of the chiton, are more useful for regions requiring maximum flexibility, while larger scales are used for areas requiring more protection.

“Working with Reza, our next step is to expand the space so we can design tailored armor for different body locations. The flexibility vs. protection needs of the chest, for example, will be different than for the elbow or knee, so we would need to design the scale assembly accordingly in terms of scale geometry, size, orientation, etc.”

The work being featured began with Department of Defense funding when Li was a graduate research assistant at the Massachusetts Institute of Technology. Since he arrived at Virginia Tech in 2017, the work has continued without sponsorship as part of his start-up funding.

“We started with a pretty pure motivation – looking for multifunctional biological materials,” Li said. “We wanted to integrate flexibility and protection and that’s very hard to achieve with synthetic systems. We will continue with our research to explore the design space beyond the original biological model system and conduct testing under different load conditions.”

Li admits the process, which has taken multiple years, is long, but the work is unique in how they’ve approached it from the start as a two-step process in conducting the fundamental biological materials research followed by the bio-inspired research.

“Having that level of familiarity with the subject has been very useful to the design and modeling of the armor,” Li said. “I think this type of bio-inspired armor will represent a significant improvement to what is currently available.”