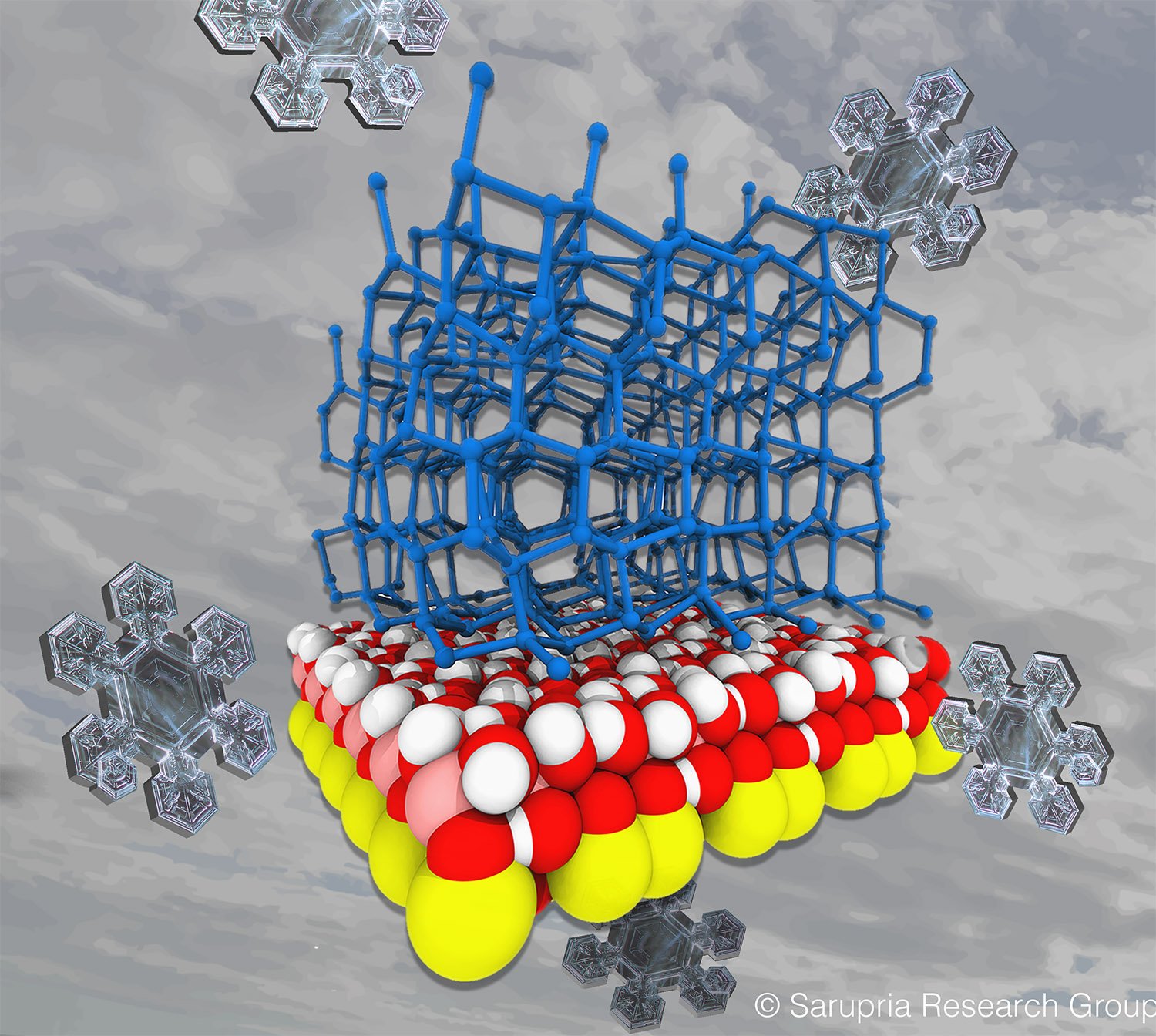 How does ice form? Surprisingly, science hasn’t fully answered that question. Differences in ice formation on various surfaces still aren’t well understood, but researchers today will explain their finding that the arrangements that surface atoms impose on water molecules are the key. The work has implications for preventing ice formation where it isn’t wanted (windshields, power lines) and for promoting ice formation where it is (food or organ preservation). The results could also help improve weather prediction.

The researchers will present their findings today at the American Chemical Society (ACS) Fall 2019 National Meeting & Exposition. ACS, the world’s largest scientific society, is holding the meeting here through Thursday. It features more than 9,500 presentations on a wide range of science topics.

“We discovered that if we look at the liquid water structure where it contacts the surface, we can start to understand and predict whether a given surface will promote or inhibit ice formation,” says Sapna Sarupria, Ph.D., the project’s principal investigator. “We’re working with collaborators to use this information to better understand the role of ice in weather and to design surfaces that are good or bad for ice formation. Wouldn’t it be great to have a windshield that doesn’t let ice stick to it in winter?”

Sarupria’s team uses computers to study molecular simulations of surfaces and ice formation. Unlike the messier real world, this controlled setting gives her the ability to examine the impact of a change in just one surface parameter – or even just one atom – at a time. The researchers then correlate the findings with those of experimentalists who work with real-world materials, including silver iodide or minerals such as mica and kaolinite. Silver iodide is so effective at promoting ice formation that it’s used for cloud seeding to stimulate rainfall during droughts.

Ice formation, or nucleation, occurs when liquid water undergoes a phase transition to solid water. Water can also undergo other phase transitions, such as changing from ice back to a liquid, or to vapor. If these transitions take place in clouds, they can form raindrops and snow. “When you want to predict the weather, you need to know how these phase transitions happen, and that’s essentially an open question,” says Sarupria, who is at Clemson University. Often these changes occur in the presence of particles such as mineral dust in the atmosphere. The type and amount of dust determine the type of precipitation that occurs. “We’re trying to understand how different dust particle surfaces affect the transition of water from the liquid to the solid phase in clouds,” she says.

Good old H2O is just that: an oxygen bound to two hydrogens. Those hydrogens are attracted to some surfaces more than others, and that affects how water molecules orient on a surface. Their arrangement with respect to surface atoms on dust particles and in relation to other water molecules is actually the most important factor in ice formation, Sarupria’s team discovered. This finding also explains why silver iodide is such a good nucleator. First, its surface atoms are laid out in a way that’s similar to the arrangement of water molecules in ice, so it’s an effective template. Second, the positive charge of the silver ion and negative charge of the iodine orient the hydrogens and oxygens of liquid water in the right manner for it to form an ice structure.

“The distances between the atoms, and this arrangement of charges, are very important for silver iodide to be a nucleator,” Sarupria says.

The researchers are now collaborating with experimentalists who study atmospheric phenomena to help them explain their results. “If we can model these phenomena, we may be able to better understand the role of ice in weather,” she explains.

Sarupria is also applying her understanding of water structure to design surfaces that can promote or inhibit ice formation. For example, to prevent damage during food storage or cryopreservation of organs, someone in the future could use the new knowledge to form ice at temperatures closer to 32 F, the freezing point of water, rather than at lower temperatures. This could be done by modifying the surface of the packaging or adding molecules to the solution for cryopreservation.

“In other cases, such as windshields and power lines, you may not want ice to form,” Sarupria says.

“So we’re trying to figure out how to make coatings or surfaces that won’t let ice form, or if it forms, that won’t let it stick.” Her team is also trying to understand how natural antifreeze proteins help fish and other organisms survive in frigid conditions. “Ultimately, whether it’s these proteins or dust particles, it all boils down to how they affect the water structure,” she says. “We want to use this information to create a parameter that could help us quickly screen surfaces for their ice nucleation ability.”