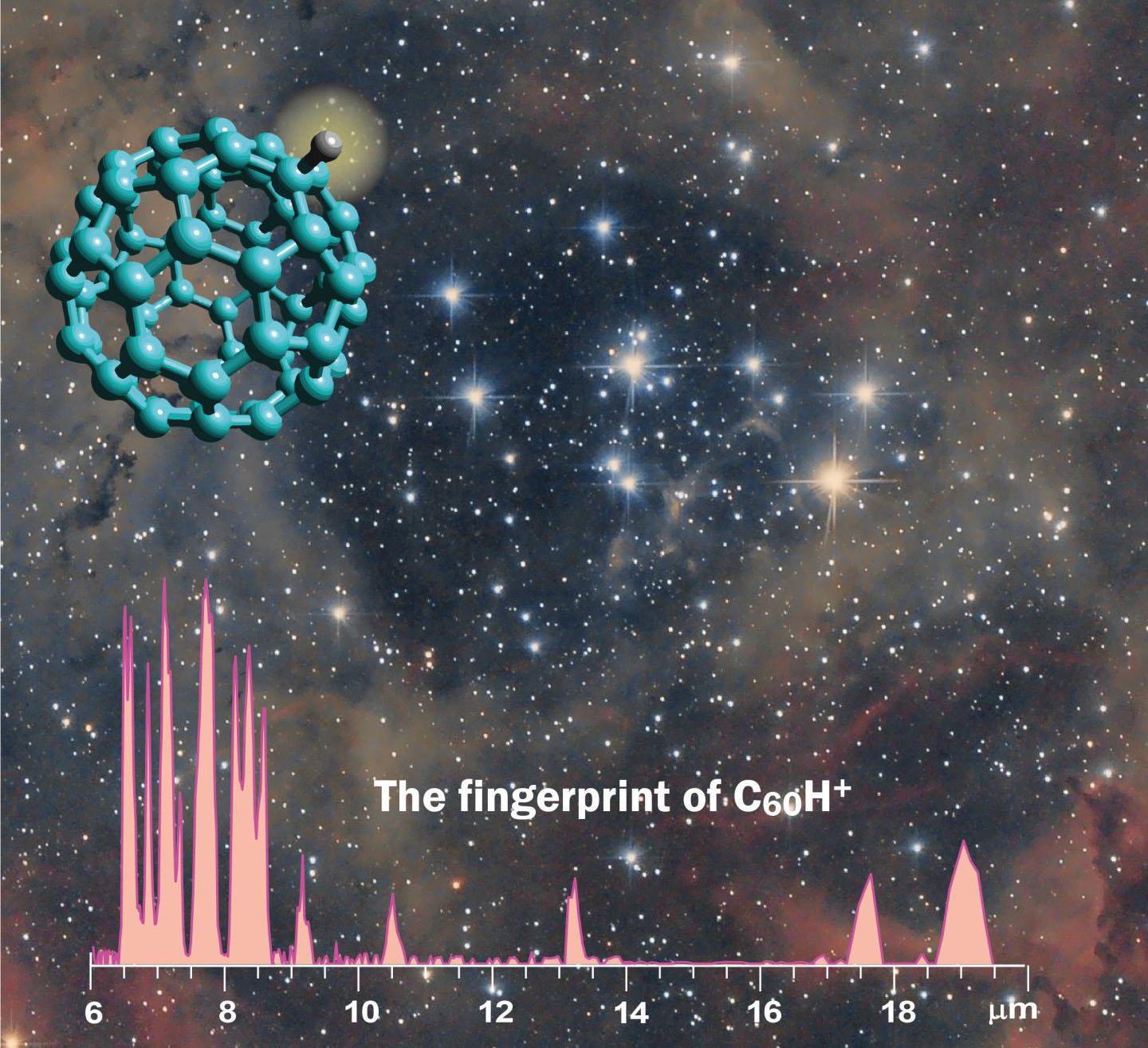 It is one of the most common forms of carbon in space: C60, a soccer ball-shaped carbon molecule, but one that has an extra proton attached to it. This is the conclusion of research carried out at Radboud University, which has succeeded for the very first time in measuring the absorption spectrum of this molecule. Such knowledge could ultimately help us to learn more about the formation of planets. The researchers will publish their findings on November 25th in Nature Astronomy.

“Almost every property of the iconic C60 molecule – also called a molecular soccer ball, Buckminsterfullerene or buckyball – that can be measured, has been measured,” says Jos Oomens, professor of Molecular Structure and Dynamics at Radboud University.

Even so, he and his colleagues have managed to measure something new: the absorption spectrum of the molecule in its protonated form, C60H+.

“In doing so, we show that it is probably abundant in interstellar clouds, while we also demonstrate a textbook example of the role of symmetry in molecular physics”, explains Oomens.

When the astronomer Harry Kroto discovered C60 in 1985, he predicted that, due to its high stability, this new form of carbon would be widespread in space. C60 consists of 60 carbon atoms in the form of a soccer ball, and has the highest possible symmetry in molecular physics. And indeed, over the last ten years, C60 has been detected in many interstellar clouds.

It is important for astronomers to determine the chemical composition of such interstellar clouds, because this is where new stars and planets are formed, including our own solar system. The more we learn about the molecules present in these clouds, the more we can discover about how our own planet was formed. C60 is one of the most complex molecules identified so far in these clouds.

Kroto also predicted that not C60, but the protonated version of the molecule, would be the most prevalent in space. Now the researchers have shown for the first time that this could in fact be the case.

“When we compared the infrared spectra emitted by interstellar clouds with our infrared spectrum for protonated C60, we found a very close match”, explains Oomens.

Colour change due to symmetry loss

Protonated C60 has a proton (H+) attached to the outside of the football, which means that the molecule loses its perfect symmetry.

“Our research shows that, as a result, protonated C60 absorbs many more colours of light than ‘normal’ C60. In fact, you could say that C60H+ has a very different colour compared with the C60 molecule, although this is in the infrared spectrum. This is a well-known effect in molecular physics, and is beautifully demonstrated in the new spectrum.”

“We found a way to work around this using the free-electron laser at the FELIX laboratory. By combining the FELIX laser with a mass spectrometer, C60H+ disintegrates and we can detect the fragmented ions rather than measuring the direct absorption spectrum.”