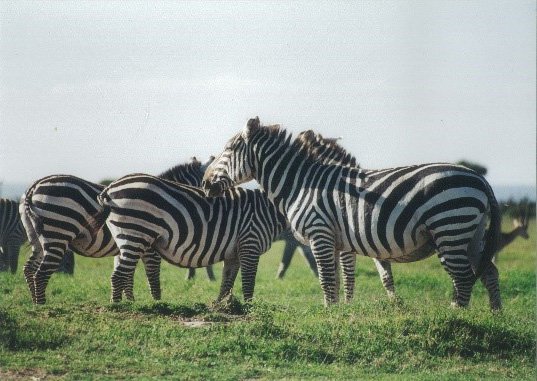 New research published in the Journal of Natural History indicates that zebras’ stripes are used to control body temperature after all – and reveals for the first time a new mechanism for how this may be achieved.

The authors argue it is the special way zebras sweat to cool down and the small-scale convection currents created between the stripes which aid evaporation, while the previously unrecorded ability of zebras to erect their black stripes is a further aid to heat loss. These three elements are key to understanding how the zebras’ unique patterning helps them manage their temperature in the heat.

The findings have been published this month in the Journal of Natural History, the scientific publication of the British Natural History Museum, by amateur naturalist and former biology technician, Alison Cobb and her zoologist husband, Dr Stephen Cobb. Together, they have spent many years in sub-Saharan Africa, where he has directed environmental research and development projects.

This study is the first-time zebras have been assessed in their natural habitat to investigate the role of stripes in temperature control. The researchers collected field data from two live zebras, a stallion and a mare, together with a zebra hide draped over a clothes-horse as a control, in Kenya.

The data revealed a temperature difference between the black and white stripes that increases as the day heats up. Whilst this difference stabilises on living zebras during the middle seven hours of the day, with the black stripes 12-15oC hotter than the white, the stripes on a lifeless zebra hide continue to heat up, by as much as another 16oC. This indicates there is an underlying mechanism to suppress heating in living zebras.It is therefore the way the zebra stripes are harnessed as one part of their cooling system, rather than just their contrasting coat colour, that is key to understanding why these animals have their unique patterning.

Like all species in the horse family, zebras sweat to keep cool. Recent research reveals that the passage of sweat in horses from the skin to the tips of the hairs is facilitated by a protein called latherin which is also present in zebras. This makes the sweat frothy, increasing its surface area and lowering its surface tension so it evaporates and prevents the animal overheating.

The researchers propose that the differential temperatures and air activity on the black and white stripes set up small-scale convective air movements within and just above the stripes, which destabilise the air and the water vapour at the tips of the hairs.

During the field research, the authors also observed – probably for the first time – that zebras have an unexpected ability to raise the hair on their black stripes (like velvet) while the white ones remain flat. The authors propose that the raising of black hairs during the heat of the day, when the stripes are at different temperatures, assists with the transfer of heat from the skin to the hair surface and conversely, when the stripes are at the same temperature in the early morning, and there is no air movement, the raised black hairs will help trap air to reduce heat loss at that time.

These three components- convective air movements, latherin-aided sweating and hair-raising – work together as a mechanism to enable zebras to wick the sweat away from their skin so it can evaporate more efficiently, to help them cool down.

The authors also speculate that the unstable air associated with the stripes may play a secondary role in deterring biting flies from landing on them. This insect behaviour has been observed in recently published studies about zebra stripes and could confer an additional advantage for zebras.

There is evidence from other recent studies that backs up the idea that heat control may be key to why zebras have their striking coats. It has been demonstrated that the zebra stripes become remarkably more pronounced on animals living in the hottest climates, near the equator. Zebras are also smallest near the equator, providing a large surface area to volume ratio which assists the animals’ ability to dissipate heat through evaporation.

Alison Cobb, lead author of the new paper says: “Ever since I read ‘How the Leopard Got His Spots’ in Kipling’s Just So Stories at bedtime when I was about four, I have wondered what zebra stripes are for. In the many years we spent living in Africa, we were always struck by how much time zebras spent grazing in the blazing heat of the day and felt the stripes might be helping them to control their temperature in some way.

“My early attempts forty years ago at testing this hypothesis involved comparing the temperatures of water in oil drums with differently coloured felt coats, but it seemed to me that this was not a good enough experiment, and I wanted to see how the stripes behaved on live zebras.

“Steve, the man who later became my husband and co-author, teaching conservation biology in the University of Nairobi, had a student working with zebras, who said he could calm them down in their crush by brushing them with a long-handled broom. This gave me courage in 1991 to ask permission to go into the Animal Orphanage in Nairobi National Park to see if I could tame one of the wild zebras in the paddock by brushing it with a dandy brush. Apart from its capture, it had never been touched by a human.To my immense pleasure it found this tickling very agreeable and as the days went by it gradually allowed me to brush it all over (see photograph). Two years later I came back to Nairobi and walked into the paddock with the brush. The same zebra mare lifted her head, looked at me hard, and walked up to me to be brushed again.

“It was not until years later that we got the opportunity to collect some field data from zebras in Africa, when we also noticed their ability to raise the hairs of their black stripes, while the white ones lay flat. It was only much more recently, when the role of latherin was discovered in helping horses sweat to keep cool, that it all began to fall into place.

“The solution to the zebra’s heat-balance challenge is cleverer, more complex and beautiful than we’d imagined. Of course, there is much more work to be done to gather evidence and fully understand how the stripes help zebras control temperature, but I am 85 now, so that’s for others to do.