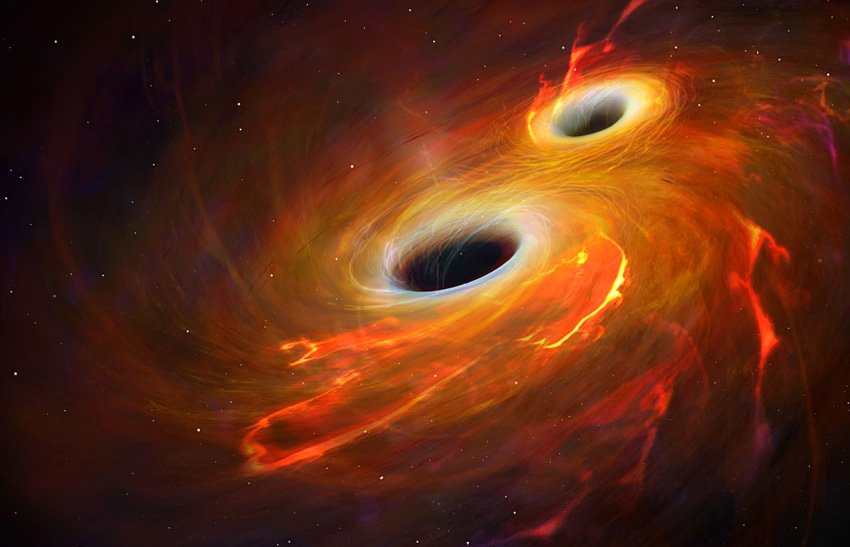 Gravitational wave researchers at the University of Birmingham have developed a new model that could help astronomers track down the origin of heavy black hole systems in the Universe.

Black holes are formed following the collapse of stars and possibly supernova explosions. These colossally dense objects are measured in terms of solar masses – the mass of our sun.

Typically, stars will only form black holes with masses of up to 45 solar masses. These systems then pair and merge together, producing gravitational waves that are observed by the LIGO and Virgo detectors.

Stellar collapse, however, causes instabilities that prevent the formation of heavier black holes – so a new model is needed to explain the existence of binary black hole systems with masses larger than about 50 solar masses.

These objects are thought to be formed from binary black holes which have then gone on to merge with other black holes. Scientists believe that these ‘next generation’ black holes – made up of the merger of their ‘parents’ – might be the heavier black holes observable by LIGO and Virgo.

In a new study, published in Physical Review D Rapid Communications, researchers from the University of Birmingham’s Institute for Gravitational Wave Astronomy, suggest that future detections of multiple generations of black-hole mergers would allow us to figure out their birthplace. They have produced new calculations that could help astronomers better understand these mergers – and where to find them.

“Star clusters – groups of stars that are bound together by gravity – might act like black-hole ‘nurseries’, providing an ideal environment to grow generations of black holes, ” explains Dr Davide Gerosa, lead author of the paper.

“But in order to know what type of star clusters are most likely to be capable of producing these, we first need to know something about the physical conditions that would be needed.”

The team believes they have found part of the solution to this puzzle by calculating the likely ‘escape speed’ a cluster needs to have to be able to host a black hole with a mass above 50 solar masses. The escape speed is the velocity at which an object would need to be travelling to escape gravitational pull. For instance, a rocket leaving earth would need to be travelling at 11km/s (25,000 mph) to get into orbit.

The team calculated that observing black holes with mass above 50 solar masses would suggest that the cluster where they lived had an escape speed larger than about 50km/s.

Where might you find these types of dense clusters? Many predictions for LIGO and Virgo so far concentrated on ‘globular clusters’ – spherical collections of about a million stars tightly bound together in the outskirts of galaxies. Their escape speed, however, is too low. This new study finds globular clusters are unlikely to host multiple generations of black holes. Astronomers will need to look further afield: nuclear star clusters, found towards the centre of some galaxies are dense enough and might provide the type of environment needed to produce these objects.

“Gravitational-wave astronomy is revolutionizing our understanding of the Universe,” says Dr Gerosa. “We are all waiting for upcoming results from LIGO and Virgo to put these and other astrophysical predictions to the test”.