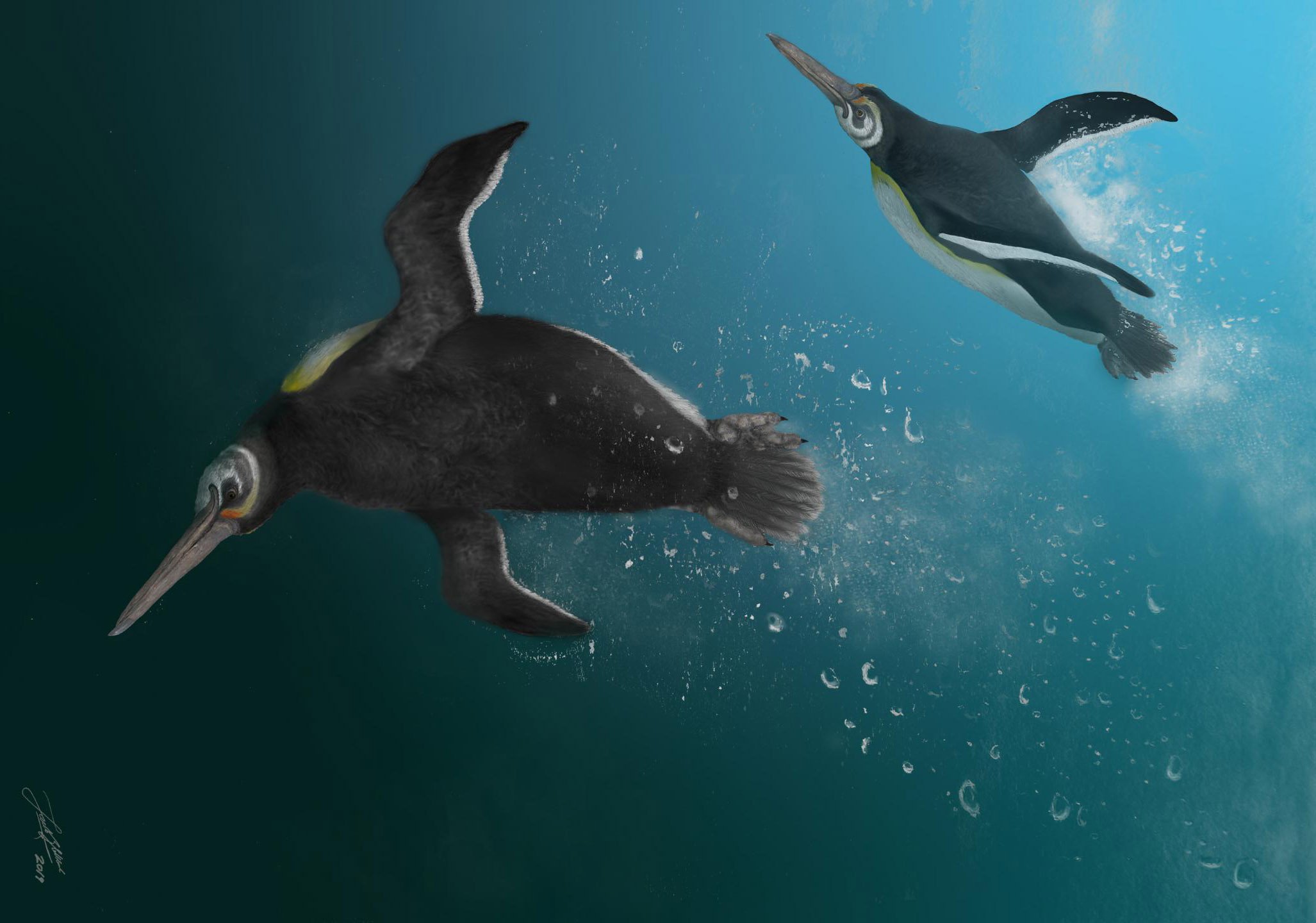 What waddled on land but swam supremely in subtropical seas more than 60 million years ago, after the dinosaurs were wiped out on sea and land?

Fossil records show giant human-sized penguins flew through Southern Hemisphere waters – along side smaller forms, similar in size to some species that live in Antarctica today.

Now the newly described Kupoupou stilwelli has been found on the geographically remote Chatham Islands in the southern Pacific near New Zealand’s South Island. It appears to be the oldest penguin known with proportions close to its modern relatives.

It lived between 62.5 million and 60 million years ago at a time when there was no ice cap at the South Pole and the seas around New Zealand were tropical or subtropical.

Flinders University PhD palaeontology candidate and University of Canterbury graduate Jacob Blokland made the discovery after studying fossil skeletons collected from Chatham Island between 2006 and 2011.

He helped build a picture of an ancient penguin that bridges a gap between extinct giant penguins and their modern relatives.

“Next to its colossal human-sized cousins, including the recently described monster penguin Crossvallia waiparensis, Kupoupou was comparatively small – no bigger than modern King Penguins which stand just under 1.1 metres tall,” says Mr Blokland, who worked with Professor Paul Scofield and Associate Professor Catherine Reid, as well as Flinders palaeontologist Associate Professor Trevor Worthy on the discovery. “Kupoupou also had proportionally shorter legs than some other early fossil penguins. In this respect, it was more like the penguins of today, meaning it would have waddled on land. This penguin is the first that has modern proportions both in terms of its size and in its hind limb and foot bones (the tarsometatarsus) or foot shape.”

As published in the US journal Palaeontologica Electronica, the animal’s scientific name acknowledges the Indigenous Moriori people of the Chatham Island (R?kohu), with Kupoupou meaning ‘diving bird’ in Te Re Moriori.

The discovery may even link the origins of penguins themselves to the eastern region of New Zealand – from the Chatham Island archipelago to the eastern coast of the South Island, where other most ancient penguin fossils have been found, 800km away.

University of Canterbury adjunct Professor Scofield, Senior Curator of Natural History at the Canterbury Museum in Christchurch, says the paper provides further support for the theory that penguins rapidly evolved shortly after the period when dinosaurs still walked the land and giant marine reptiles swam in the sea.

“We think it’s likely that the ancestors of penguins diverged from the lineage leading to their closest living relatives – such as albatross and petrels – during the Late Cretaceous period, and then many different species sprang up after the dinosaurs were wiped out,” Professor Scofield says. “It’s not impossible that penguins lost the ability to fly and gained the ability to swim after the extinction event of 66 million years ago, implying the birds underwent huge changes in a very short time. If we ever find a penguin fossil from the Cretaceous period, we’ll know for sure.”