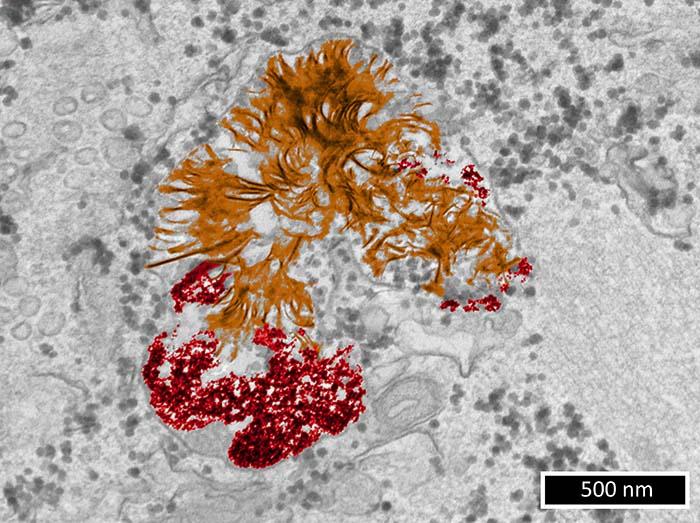 Gold nanoparticles, which are supposed to be stable in biological environments, can be degraded inside cells. This research conducted by teams from the CNRS, l’Université de Paris, Sorbonne Université, and l’Université de Strasbourg will be published in PNAS on December 16 2019, and reveals the ability of cells to metabolize gold, which is nevertheless not essential for their functioning. This study opens the way for a better understanding of the life cycle of gold nanoparticles in organisms.

Gold nanoparticles possess unique optical properties that are used in nanomedicine for anti-cancer therapy and imaging. They are also included in cosmetic and food formulas. Yet their long-term fate in cells remained unclear, even though it was generally accepted that gold nanoparticles remained intact indefinitely in the lysosome, the cell’s “waste recycling centre.”

Contrary to the current paradigm, scientists from the laboratoire Matière et Systèmes Complexes (CNRS/Université de Paris), laboratoire Matériaux et Phénomènes Quantiques (CNRS/Université de Paris), Institut de minéralogie, de physique des matériaux et de cosmochimie (CNRS/Sorbonne Université/ Muséum national d’Histoire naturelle/IRD), and Institut de physique et chimie des matériaux de Strasbourg (CNRS/Université de Strasbourg) tracked the evolution of gold nanoparticles for 6 months in a cellular environment, and showed that they underwent significant transformations after a few weeks. By measuring the expression of over 18,000 genes over time, they revealed a biological process that includes mechanisms of detoxification and cell protection, which are also involved in the degradation of other nanomaterials. They also observed both the presence of non-degraded nanoparticles and degradation products in the form of nanoleaves (see image).

Nanoleaves had already been observed nearly 50 years ago in patients suffering from rheumatoid polyarthritis who had been treated with another form of gold (ionic gold or “gold salts”) to relieve pain in their joints. Consequently, there is a shared metabolism of degradation between gold salts and gold nanoparticles.

This unexpected result, which generalises the fate of gold nanoparticles in organisms, could help in the future to better evaluate the toxicity of gold nanoparticles and their capacity to be eliminated from the organism. This interdisciplinary work also highlights that gold, whatever its initial form, can be metabolized by mammals despite not being essential to their survival.