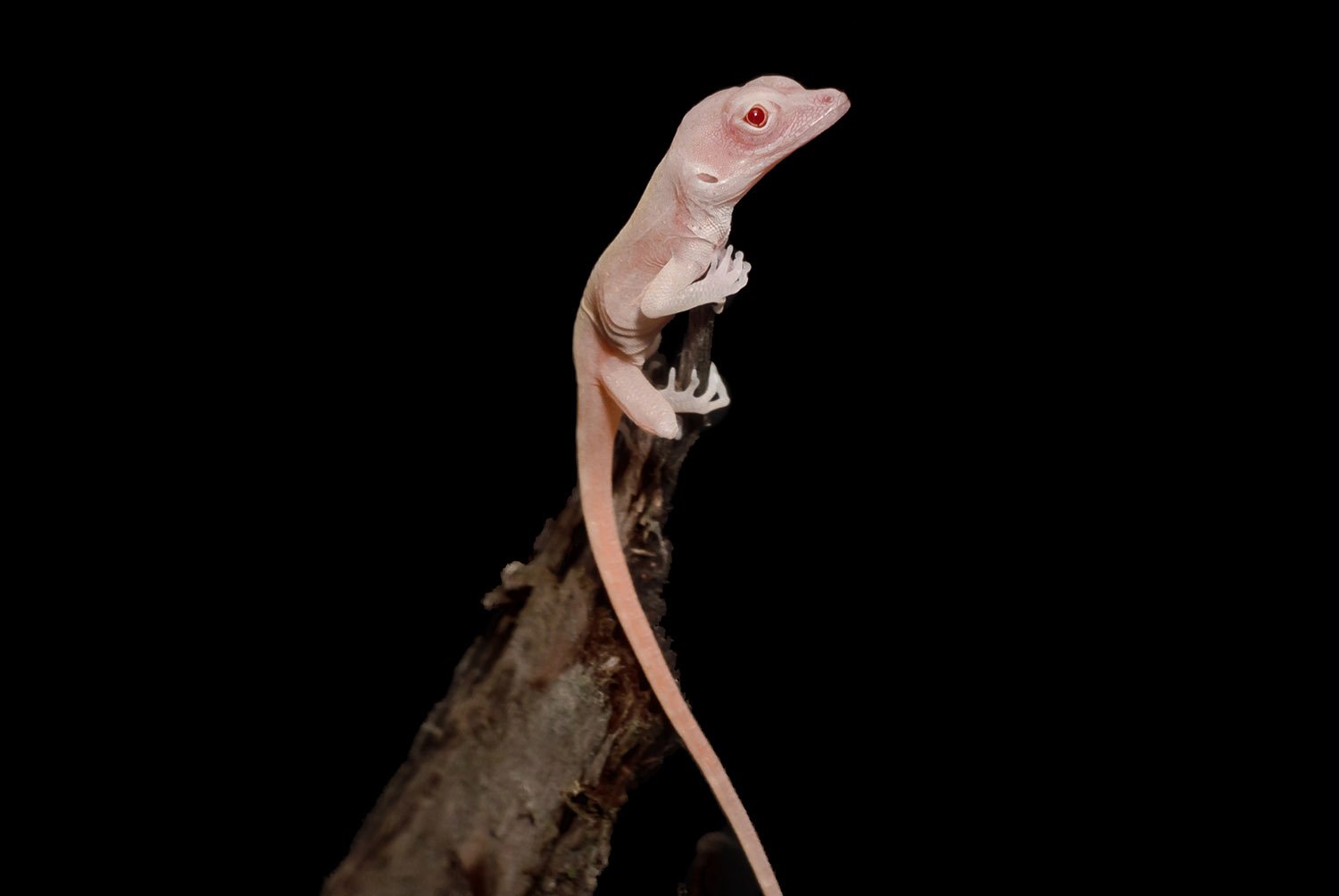 Meet the world’s first gene-edited reptiles: albino lizards roughly the size of your index finger. Researchers used CRISPR-Cas9 to make the lizards, providing a technique for gene editing outside of major animal models. In their study, publishing August 27 in the journal Cell Reports, the researchers also show that the lizards can successfully pass gene-edited alleles for albinism to their offspring.

“For quite some time we’ve been wrestling with how to modify reptile genomes and manipulate genes in reptiles, but we’ve been stuck in the mode of how gene editing is being done in the major model systems,” says corresponding author Doug Menke, an associate professor at the University of Georgia.

“We wanted to explore anole lizards to study the evolution of gene regulation, since they’ve experienced a series of speciation events on Caribbean islands, much like Darwin’s finches of the Galapagos.”

The way gene editing is performed in most model systems is to inject CRISPR-Cas9 gene-editing reagents into freshly fertilized eggs or single-cell zygotes. But this technique cannot be used in reptiles, Menke says, because lizards have internal fertilization and the time of fertilization cannot be predicted. An isolated single-cell embryo from a female lizard also cannot be easily transferred, making it almost impossible to manipulate outside of the lizard.

But Menke and his research team noticed that the transparent membrane over the ovary allowed them to see all of the developing eggs, including which eggs were going to be ovulated and fertilized next. They decided to inject the CRISPR reagents into the unfertilized eggs within the ovaries and see if the CRISPR would still work.

“Because we are injecting unfertilized eggs, we thought that we would only be able to perform gene editing on the alleles inherited from the mother. Paternal DNA isn’t in these unfertilized oocytes,” Menke says.

“We had to wait three months for the lizards to hatch, so it’s a bit like slow-motion gene editing. But it turns out that when we did this procedure, about half of the mutant lizards that we generated had gene-editing events on the maternal allele and the paternal allele.”

This suggests that the CRISPR components remain active for several days, or even weeks, within the unfertilized eggs. After screening the offspring, the researchers found that about 6% to 9% of the oocytes, depending on their size, produced offspring with gene-editing events.

“Relative to the very established model systems that can have efficiencies up to 80% or higher, 6% seems low, but no one has been able to do these sorts of manipulations in any reptile before,” Menke says. “There’s not a large community of developmental geneticists that are studying reptiles, so we’re hoping to tap into exciting functional biology that has been unexplored.”

Menke says that his team had two reasons for making the lizards albino, as opposed to editing other traits. First, when the tyrosinase albinism gene is knocked out, it results in a loss of pigmentation without being lethal to the animal. Second, since humans with albinism often have vision problems, the researchers hope to use the lizards as a model to study how the loss of this gene impacts retina development.

“Humans and other primates have a feature in the eye called the fovea, which is a pit-like structure in the retina that’s critical for high-acuity vision. The fovea is absent in major model systems, but is present in anole lizards, as they rely on high-acuity vision to prey on insects,” Menke says.

Studying gene functions in reptiles offers new opportunities for exploring aspects of development that are best studied in non-established animal models, Menke says. And ultimately, this gene-editing technique could be translated for use in other animals.

“We never know where the next major insights are going to come from, and if we can’t even study how genes work in a huge group of animals, then there’s no way to know if we’ve explored everything there is to explore in the realm of gene function in animals,” Menke says. “Each species undoubtedly has things to tell us, if we take the time to develop the methods to perform gene editing.”