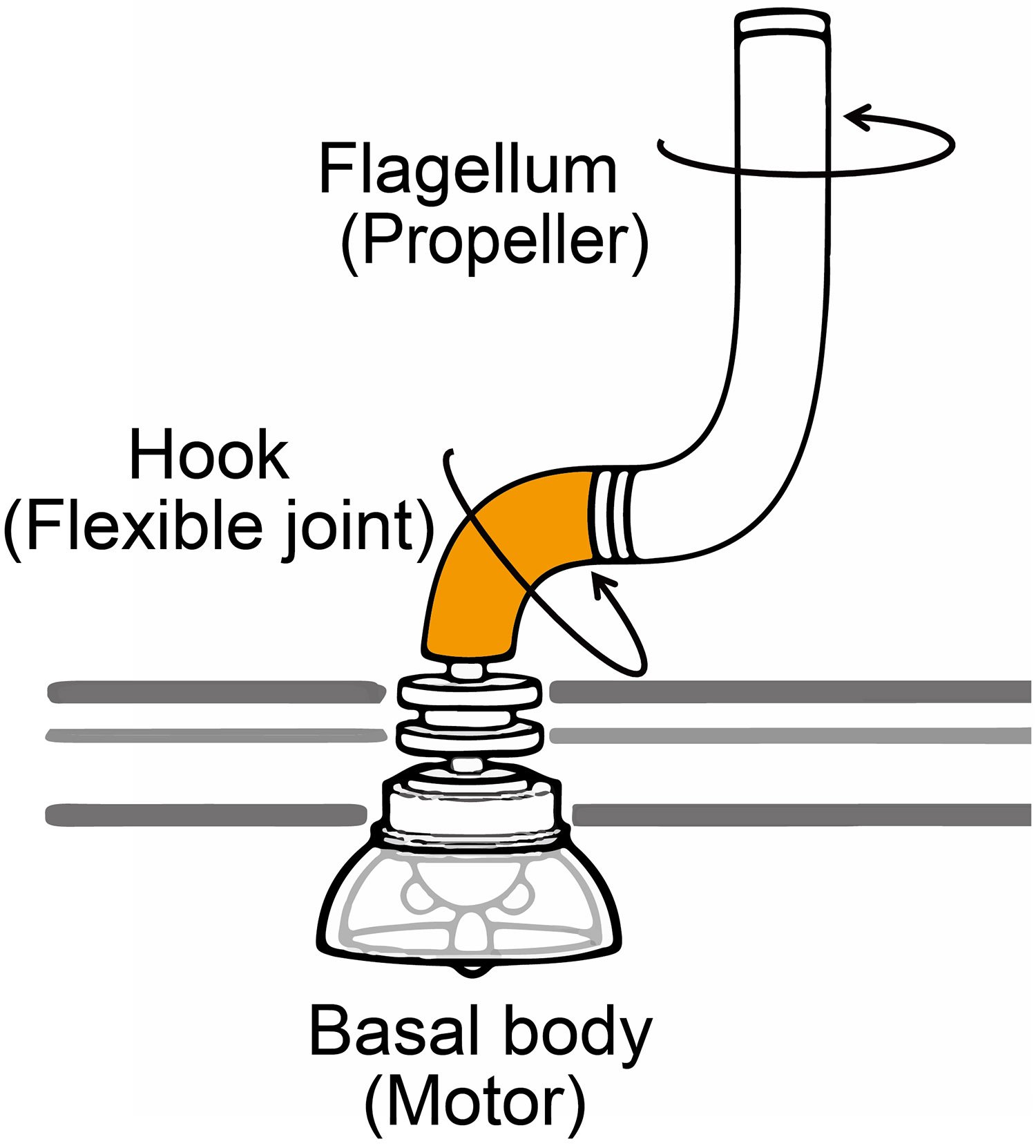 The flagellum is often cited as an example of natural design ingenuity – it is a powerful nanomachine that allows bacteria to swim effortlessly in search of food. Yet despite being a popular object of study over the last half a century, the flagellum’s exact mechanics remain enigmatic.

Researchers at the Okinawa Institute of Science and Technology Graduate University (OIST) now show how bacteria transmit motion from an inner motor to an outer tail through a flexible joint in the flagellum known as the hook. This finding, reported in Nature Structural & Molecular Biology, could help in the fight against deadly bacterial infections. By better understanding how bacteria move, researchers may be able to improve disease prevention strategies.

The team describes how the flagellar hook acts as a dynamic joint, transmitting torque from inside the cell to rotate the outer tail, allowing bacteria to move. Using cryogenic electron microscopy, or cryo-EM, they showed how the hook is able to be both flexible and rigid at the same time – despite comprising a single type of protein. Different subunits of this protein can adopt at least eleven conformations, allowing dynamic shifts in the hook’s structure.

“While the outer filament is thought to exist in two states, the hook appears to have no set configuration,” says Professor Matthias Wolf, senior author on the study. “This contradicts the assumed ‘two state model’ thought to explain the hook’s function, and explains how such a dynamic structure is possible. This intricate system is a testament to evolution’s ability to optimize over millions of years.”

“While building the model of the hook, I was astonished by its superb assembly,” adds Dr. Hideyuki Matsunami, another lead author.

In this study, Wolf’s team applied cryo-EM to the bacterial flagellar hook. With support from Professor Emeritus Shin-Ichi Aizawa at the Prefectural University of Hiroshima, the team was able to first purify the hook structure. This unadulterated sample was then cooled to cryogenic temperatures and plunge-frozen before being photographed. Finally, the resulting images were assembled to reveal the hook’s structure with the help of OIST’s high performance computing cluster.

While cryo-EM once only generated static images, recent evolutions include combining the method with supercomputing and using classification algorithms to fully understand the 2D images and the 3D objects they represent. This yields richer insights at near atomic resolution, and allows the team to consider the relationship between structure and function.

The flagellar hook is a joint of approximately 130 subunits, each comprising a single type of protein. Each subunit is made of three domains that act as rigid bodies, connected by two flexible hinges. Interestingly, the researchers found that these subunits can adopt eleven distinct states despite their identical chemical makeup. This variety allows the hook to adopt many conformations, and it can shift between them while bending.

These shifts along the hook’s helical form allow torque to travel from the spinning motor through its helix, eventually rotating the outer filament. The combination of rigid bodies connected by hinges, meanwhile, explains how the hook is able to be both flexible and rigid at the same time. The team also confirmed that this particular motif is conserved across several common species of bacteria, suggesting that the observed hook architecture is a common feature.

Knowing how the flagellum works is the first step in exploiting its function. The model organism used in this study, Salmonella enterica, is a human pathogen and a major cause of death in the developing world. Motility is crucial in allowing bacteria to cause disease – and the hook is essential for motility. Interrupting motility, perhaps via the hook, could be a valuable disease prevention strategy.