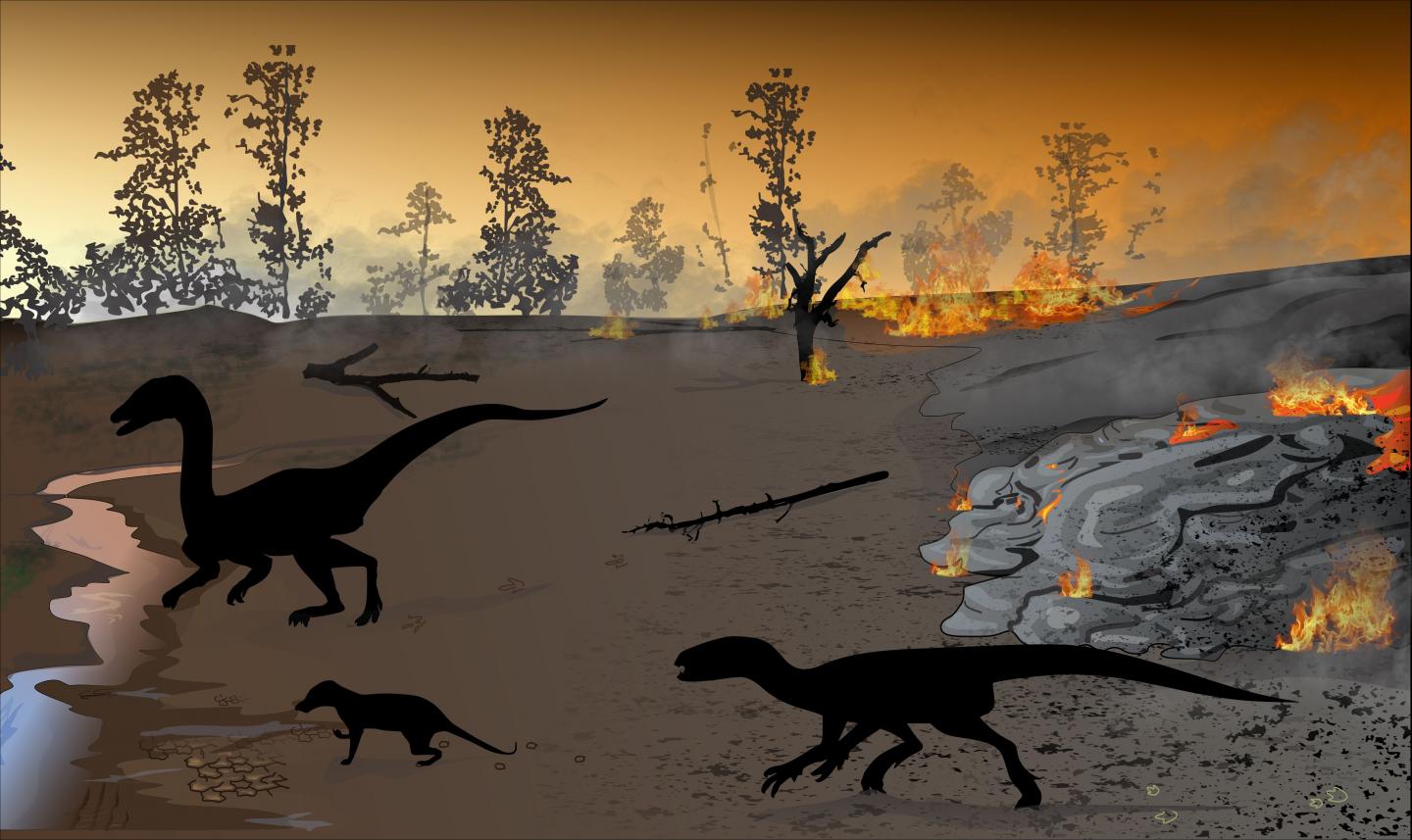 In southern Africa, dinosaurs and synapsids, a group of animals that includes mammals and their closest fossil relatives, survived in a “land of fire” at the start of an Early Jurassic mass extinction, according to a study published January 29, 2020 in the open-access journal PLOS ONE by Emese M. Bordy of the University of Cape Town and colleagues.

The Karoo Basin of southern Africa is well-known for its massive deposits of igneous rocks left behind by extensive basaltic lava flows during the Early Jurassic.

At this time, intense volcanic activity is thought to have had dramatic impacts on the local environment and global atmosphere, coincident with a worldwide mass extinction recorded in the fossil record. The fossils of the Karoo Basin thus have a lot to tell about how ecosystems responded to these environmental stresses.

In this study, Bordy and colleagues describe and identify footprints preserved in a sandstone layer deposited between lava flows, dated to 183 million years ago. In total, they report five trackways containing a total of 25 footprints, representing three types of animals: 1) potentially small synapsids, a group of animals that includes mammals and their forerunners; 2) large, bipedal, likely carnivorous dinosaurs; and 3) small, quadrupedal, likely herbivorous dinosaurs represented by a new ichnospecies (trace fossils like footprints receive their own taxonomic designations, known as ichnospecies).

These fossils represent some of the very last animals known to have inhabited the main Karoo Basin before it was overwhelmed by lava. Since the sandstone preserving these footprints was deposited between lava flows, this indicates that a variety of animals survived in the area even after volcanic activity had begun and the region was transformed into a “land of fire.” The authors suggest that further research to uncover more fossils and refine the dating of local rock layers has the potential to provide invaluable data on how local ecosystems responded to intense environmental stress at the onset of a global mass extinction.

Bordy adds: “The fossil footprints were discovered within a thick pile of ancient basaltic lava flows that are ~183 million years old. The fossil tracks tell a story from our deep past on how continental ecosystems could co-exist with truly giant volcanic events that can only be studied from the geological record, because they do not have modern equivalents, although they can occur in the future of the Earth.”