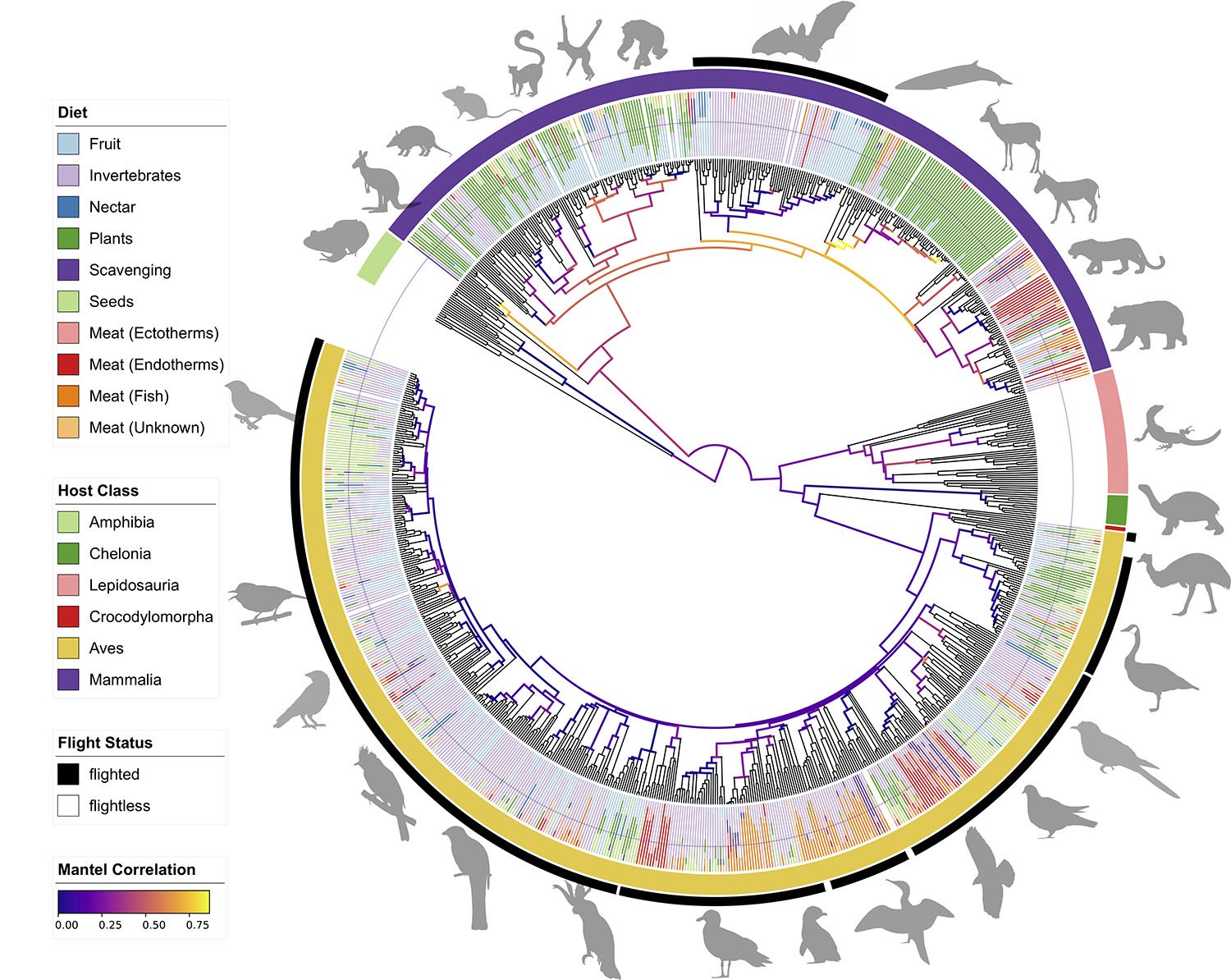 It’s no secret there’s a close relationship between humans and our microbiomes – the communities of microbes that live in and on us. In fact, researchers can usually guess what an animal’s gut microbiome might look like by studying closely related species. Or at least, that’s what they thought.

It turns out that while there’s a remarkable predictability in the gut microbiomes in most mammalian species, some kinds of evolutionary adaptations – such as flight – might lead to drastically different microbial populations.

In a new study published January 7, 2020 in mBio, University of California San Diego researchers found similarities in birds and bats beyond their penchant for flight. After working with dozens of institutions around the world to collect fecal samples from nearly 900 vertebrate species and comparing their gut microbiomes, the team was surprised by the lack of similarities between birds and bats.

“This research suggests that mammals – including humans – may be the exception rather than the rule in terms of how deeply reliant they are on their gut microbes,” said co-first author Se Jin Song, PhD, director of research at the Center for Microbiome Innovation at UC San Diego. “This represents a paradigm shift in how we think about animals and the relationships they have with their microbes.

“We were broadly interested in figuring out what kinds of factors explain why animals have the types of gut microbes they do, but we also wanted to answer more specific questions like when different animals evolve similar traits – such as adaptation to an extreme diet – do their gut microbiomes also evolve in a similar way?

“When we first started this project, I thought that it would make sense that we’d see similar associations between animals and their gut microbes when the animals shared a similar diet. Our pie-in-the-sky idea was that flight could impose a similar type of selection on which microbes animals host. What was shocking was that we didn’t find that birds and bats share a similar microbiome per se, but rather that both lack a specific relationship with microbes.”

Earlier studies indicated the relationship between mammals and their microbes is very old. This led researchers to believe that they could predict the kinds of microbes a species might host just by looking at other similar mammals. The new research has toppled that idea, finding that bats are unique among mammals, simply because their gut microbiomes aren’t predictable in terms of the types and quantities of microbes found in the guts of related species. This pattern actually more closely resembles birds, who also have unpredictable microbial communities.

“What that means is that, while some animals seem to have very stable relationships with their microbiomes, with similar bacterial communities persisting across millions of years, others appear to have much more dynamic relationships,” said co-first author Jon Sanders, PhD, a former postdoctoral fellow in the UC San Diego lab of co-senior author Rob Knight, PhD. “Most surprisingly, powered flight seems to be associated with that lack of stability. Bats and birds both seem to have independently ended up with gut microbiomes that don’t seem to follow the hosts’ evolutionary relationships.”

The variability across related species that share similar diets indicates that, at least in birds and bats, a specific microbial balance may not be so critical for supporting normal digestion. This means that the evolutionary requirements of adopting flight may be having direct, profound effects on the microbiome, and raises questions about what other kinds of evolutionary pressures could be influencing microbial communities.

“If you’re carrying a lot of bacteria in your gut, it can be pretty heavy and may take resources away from you,” said Holly Lutz, PhD, a postdoctoral researcher in the Department of Pediatrics at UC San Diego School of Medicine and research associate at Chicago’s Field Museum. “So if you’re an animal that has really high energetic demands, say because you’re flying, you may not be able to afford to carry all those bacteria around, and you may not be able to afford to feed them or deal with them.”

The researchers see this data set as a new opportunity to help inform future research on the evolution of microbiomes and their importance for different species. “As humans, we’ve always thought that we’re very special,” said Song. “And we might be, but we do live in a world that’s much older than we are. This work helps us better understand the evolution and ecology of host-microbe relationships, and I think will help us better understand ourselves.”

“This study tells us a lot about large-scale patterns of evolution in the vertebrate gut, but there is still much more to do,” said Knight, professor in the UC San Diego School of Medicine and Jacobs School of Engineering and director of the Center for Microbiome Innovation. “We need to perform functional studies with metagenomics and metabolomics, and understand microbes in other parts of the body, how they change during development, and how they interact with environmental microbes in both the wild and in captivity to impact animal health. Understanding these principles in thousands of other species will help us understand our own.”