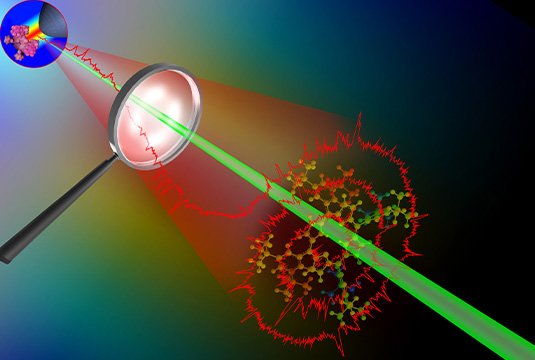 Scientists at the Laboratory for Attosecond Physics have developed a unique laser technology for the analysis of the molecular composition of biological samples. It is capable of detecting minimal variations in the chemical make up of organic systems.

At the biochemical level, organisms can be thought of as complex collections of different species of molecules. In the course of their metabolism, biological cells synthesize chemical compounds, and modify them in multifarious ways. Many of these products are released into the intercellular medium and accumulate in body fluids like the blood. One major aim of biomedical research is to understand what these immensely complex mixtures of molecules can tell us about the state of the organism concerned. All differentiated cell types contribute to this ‘soup’. But precancerous and malignant cells add their own specific molecular markers – and these provide the first indications of the presence of tumour cells in the body. So far, however, very few of these indicator molecules have been identified, and those that are known appear in minuscule amounts in biological samples. This makes them extremely difficult to detect. It is assumed that many of the most informative molecular signatures comprise combinations of compounds that belong to all the various types of molecules found in cells – proteins, sugars, fats and their diverse derivatives. In order to define them, a single analytical method that is versatile and sensitive enough to detect and measure the levels of all of them is needed.

An interdisciplinary team led by Prof. Ferenc Krausz has now built a new laser-based system that is specifically designed for this purpose. The group is based at the Laboratory for Attosecond Physics (LAP), which is run jointly by Ludwig-Maximilians-Universitaet (LMU) in Munich and the Max Planck Institute for Quantum Optics (MPQ), and it includes physicists, biologists and data scientists. This system enables one to obtain chemical fingerprints in the form of spectra of infrared light, which reveal the molecular compositions of samples of all sorts, including samples of biological origin. The technique offers unprecedented sensitivity and can be used for all known classes of biomolecules.

The new laser spectrometer builds on technologies that were originally developed in the LAP for the production of ultrashort laser pulses, which are used to study the ultrafast dynamics of subatomic systems. The instrument, which was built by physicist Ioachim Pupeza and his colleagues, is designed to emit trains of extremely powerful pulses of laser light that cover a broad segment of the spectrum in the infrared wavelength. Each of these pulses lasts for a few femtoseconds (in scientific notation 1 fs = 10 -15 s, one millionth of a billionth of a second). These extremely brief flashes of infrared light cause the bonds that link atoms together to vibrate. The effect is analogous to that of striking a tuning fork. After the passage of the pulse, the vibrating molecules emit coherent light at highly characteristic wavelengths or, equivalently, oscillation frequencies. The new technology makes it possible to capture the complete ensemble of wavelengths emitted. Since every distinct compound in the sample vibrates at a specific set of frequencies, it contributes its own well defined ‘subspectrum’ to the emission. No molecular species has anywhere to hide.

“With this laser, we can cover a wide range of infrared wavelengths – from 6 to 12 micrometers – that stimulate vibrations in molecules,” says Marinus Huber, joint first author of the study and a member of biologist Mihaela Zigman’s group, which was also involved in the experiments carried out in the LAP. “Unlike mass spectroscopy, this method provides access to all the types of molecules found in biological samples,” she explains.

Each of the ultrashort laser pulses used to excite the molecules consists of only a few oscillations of the optical field. Moreover, the spectral brightness of the pulse (i.e. its photon density) is up to twice as high as those generated by conventional synchrotrons, which have hitherto served as radiation sources for comparable approaches to molecular spectroscopy. In addition, the infrared radiation is both spatially and temporally coherent. All of these physical parameters together account for the new laser system’s extremely high sensitivity, enabling molecules present in very low concentrations to be detected and high-precision molecular fingerprints to be produced. Not only that, samples of living tissue up to 0.1 mm thick can, for the first time, be illuminated with infrared light and analyzed with unparalleled sensitivity. In initial experiments, the team at the LAP has applied the technique to leaves and other living cells, as well as blood samples.

“This ability to accurately measure variations in he molecular composition of body fluids opens up new possibilities in biology and medicine, and in the future the technique could find application in the early detection of disorders,” Zigman says.