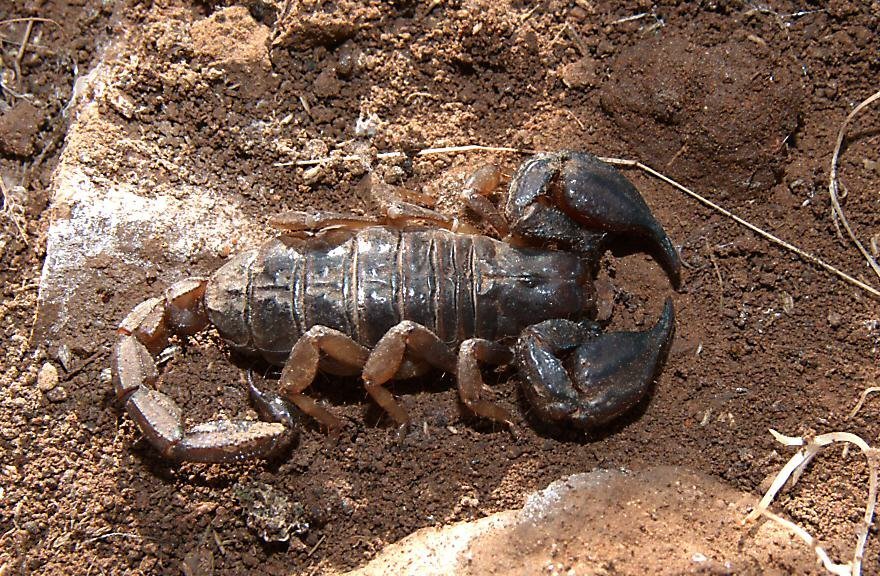 Researchers at UC San Francisco and the University of Queensland have discovered a scorpion toxin that targets the “wasabi receptor,” a chemical-sensing protein found in nerve cells that’s responsible for the sinus-jolting sting of wasabi and the flood of tears associated with chopping onions. Because the toxin triggers a pain response through a previously unknown mechanism, scientists think it can be used as a tool for studying chronic pain and inflammation, and may eventually lead to the development of new kinds of non-opioid pain relievers.

The scientists isolated the toxin, a short protein (or peptide) that they dubbed the “wasabi receptor toxin” (WaTx), from the venom of the Australian Black Rock scorpion. The discovery came as the researchers were conducting a systematic search for compounds in animal venom that could activate, and therefore be used to probe and study, the wasabi receptor – a sensory protein officially named TRPA1 (pronounced “trip A1”) that’s embedded in sensory nerve endings throughout the body. When activated, TRPA1 opens to reveal a channel that allows sodium and calcium ions to flow into the cell, which can induce pain and inflammation.

“Think of TRPA1 as the body’s ‘fire alarm’ for chemical irritants in the environment,” said John Lin King, a doctoral student in UCSF’s Neuroscience Graduate Program and lead author of a study published August 22, 2019 in Cell, which describes the toxin and its surprising mode of action.

“When this receptor encounters a potentially harmful compound – specifically, a class of chemicals known as ‘reactive electrophiles,’ which can cause significant damage to cells – it is activated to let you know you’re being exposed to something dangerous that you need to remove yourself from.”

Cigarette smoke and environmental pollutants, for example, are rich in reactive electrophiles which can trigger TRPA1 in the cells that line the surface of the body’s airway, which can induce coughing fits and sustained airway inflammation. The receptor can also be activated by chemicals in pungent foods like wasabi, onions, mustard, ginger and garlic – compounds that, according to Lin King, may have evolved to discourage animals from eating these plants. WaTx appears to have evolved for the same reason.

Though many animals use venom to paralyze or kill their prey, WaTx seems to serve a purely defensive purpose. Virtually all animals, from worms to humans, have some form of TRPA1. But the researchers found that WaTx can only activate the version found in mammals, which aren’t on the menu for Black Rock scorpions, suggesting that the toxin is mainly used to ward off mammalian predators.

But what the researchers found most interesting about WaTx was its mode of action. Though it triggers TRPA1, just as the compounds found in pungent plants do – and even targets the very same site on that receptor – the way it activates the receptor was novel and unexpected.

First, WaTx forces its way into the cell, circumventing the standard routes that place strict limits on what’s allowed in and out. Most compounds, from tiny ions to large molecules, are either ingested by the cell through a complex process known as “endocytosis,” or they gain entry by passing through one of the many protein channels that stud the cell’s surface and act as gatekeepers.

“It was surprising to find a toxin that can pass directly through membranes. This is unusual for peptide toxins,” Lin King said. “But it’s also exciting because if you understand how these peptides get across the membrane, you might be able to use them to carry things – drugs, for example – into the cell that can’t normally get across membranes.”

Once inside the cell, WaTx attaches itself to a site on TRPA1 known as the “allosteric nexus,” the very same site targeted by pungent plant compounds and environmental irritants like smoke. But that’s where the similarities end.

Plant and environmental irritants alter the chemistry of the allosteric nexus, which causes the TRPA1 channel to rapidly flutter open and closed. This allows positively charged sodium and calcium ions to flow into the cell, triggering pain. Though both ions are able to enter when TRPA1 is activated by these irritants, the channel exhibits a strong preference for calcium and lets much more of it into the cell, which leads to inflammation. By contrast, WaTx wedges itself into the allosteric nexus and props the channel open. This abolishes its preference for calcium. As a result, overall ion levels are high enough to trigger a pain response, but calcium levels remain too low to initiate inflammation.

To demonstrate this, the researchers injected either mustard oil, a plant irritant known to activate the wasabi receptor, or WaTx into the paws of mice. With mustard oil, they observed acute pain, hypersensitivity to temperature and touch – key hallmarks of chronic pain – and inflammation, as evidenced by significant swelling. But with WaTx, they observed acute pain and pain hypersensitivities, but no swelling.

“When triggered by calcium, nerve cells can release pro-inflammatory signals that tell the immune system that something’s wrong and needs to be repaired,” Lin King said.

“This ‘neurogenic inflammation’ is one of the key processes that becomes dysregulated in chronic pain. Our results suggest that you can decouple the protective acute pain response from the inflammation that establishes chronic pain. Achieving this goal, if only in principle, has been a longstanding aim in the field.”

The researchers believe their findings will lead to a better understanding of acute pain, as well as the link between chronic pain and inflammation, which were previously thought to be experimentally indistinguishable. The findings may even lay the groundwork for the development of new pain drugs.

“The discovery of this toxin provides scientists with a new tool that can be used to probe the molecular mechanisms of pain, in particular, to selectively probe the processes that lead to pain hypersensitivity,” Lin King said. “And for those interested in drug discovery, our findings underscore the promise of TRPA1 as a target for new classes of non-opioid analgesics to treat chronic pain.”