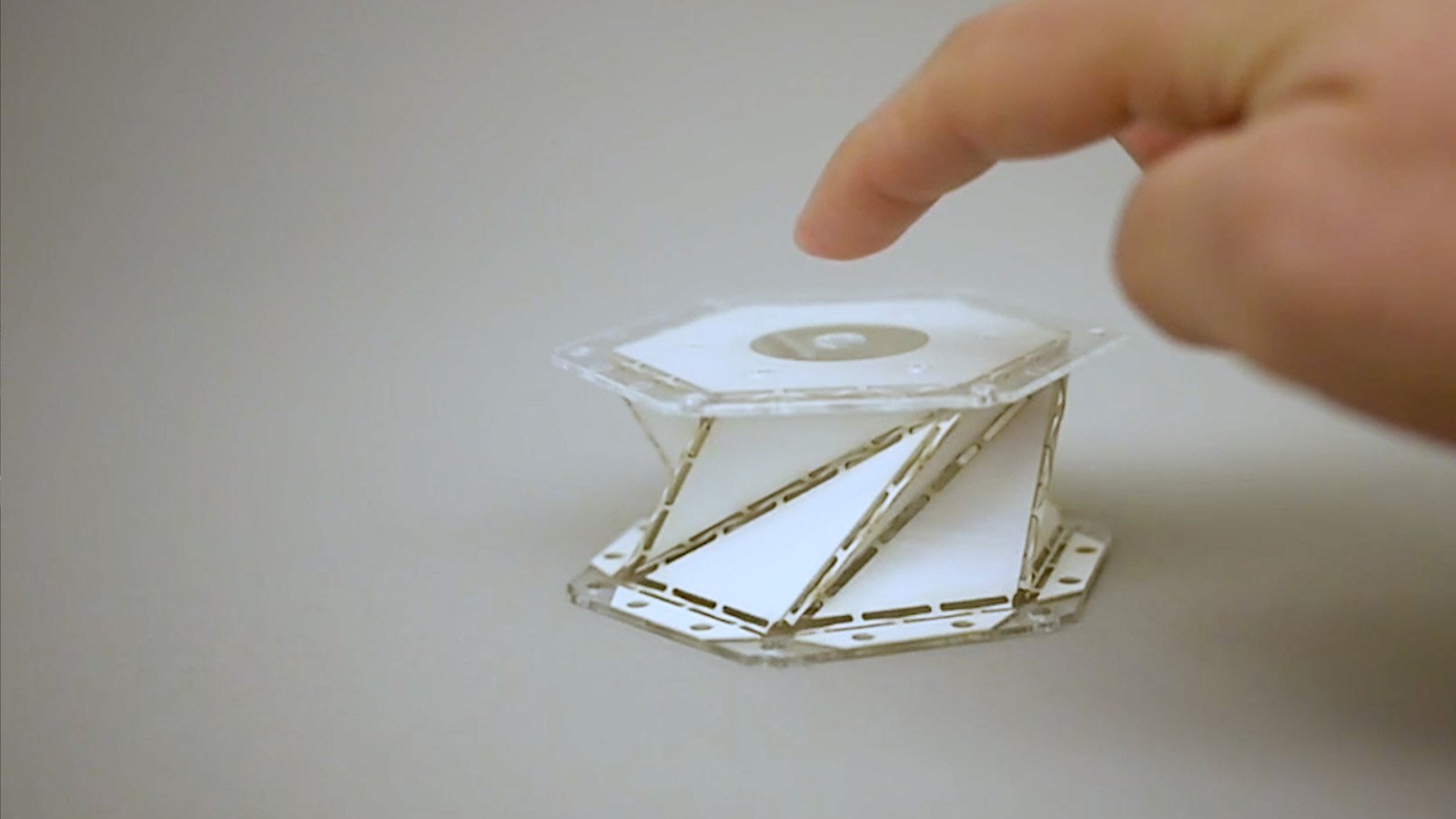 Space vehicles like SpaceX’s Falcon 9 are designed to be reusable. But this means that, like Olympic gymnasts hoping for a gold medal, they have to stick their landings.

Landing is stressful on a rocket’s legs because they must handle the force from the impact with the landing pad. One way to combat this is to build legs out of materials that absorb some of the force and soften the blow.

University of Washington researchers have developed a novel solution to help reduce impact forces — for potential applications in spacecraft, cars and beyond. Inspired by the paper folding art of origami, the team created a paper model of a metamaterial that uses “folding creases” to soften impact forces and instead promote forces that relax stresses in the chain. The team published its results May 24 in Science Advances.

“If you were wearing a football helmet made of this material and something hit the helmet, you’d never feel that hit on your head. By the time the energy reaches you, it’s no longer pushing. It’s pulling,” said corresponding author Jinkyu Yang, a UW associate professor of aeronautics and astronautics.

Yang and his team designed this new metamaterial to have the properties they wanted.

“Metamaterials are like Legos. You can make all types of structures by repeating a single type of building block, or unit cell as we call it,” Jinkyu Yang said.

“Depending on how you design your unit cell, you can create a material with unique mechanical properties that are unprecedented in nature.”

The researchers turned to the art of origami to create this particular unit cell.

“Origami is great for realizing the unit cell,” said co-author Yasuhiro Miyazawa, a UW aeronautics and astronautics doctoral student. “By changing where we introduce creases into flat materials, we can design materials that exhibit different degrees of stiffness when they fold and unfold. Here we’ve created a unit cell that softens the force it feels when someone pushes on it, and it accentuates the tension that follows as the cell returns to its normal shape.”

Just like origami, these unit cell prototypes are made out of paper. The researchers used a laser cutter to cut dotted lines into paper to designate where to fold. The team folded the paper along the lines to form a cylindrical structure, and then glued acrylic caps on either end to connect the cells into a long chain.

The researchers lined up 20 cells and connected one end to a device that pushed and set off a reaction throughout the chain. Using six GoPro cameras, the team tracked the initial compression wave and the following tension wave as the unit cells returned to normal.

The chain composed of the origami cells showed the counterintuitive wave motion: Even though the compressive pushing force from the device started the whole reaction, that force never made it to the other end of the chain. Instead, it was replaced by the tension force that started as the first unit cells returned to normal and propagated faster and faster down the chain. So the unit cells at the end of the chain only felt the tension force pulling them back.

“Impact is a problem we encounter on a daily basis, and our system provides a completely new approach to reducing its effects. For example, we’d like to use it to help both people and cars fare better in car accidents,” Yang said. “Right now it’s made out of paper, but we plan to make it out of a composite material. Ideally, we could optimize the material for each specific application.”