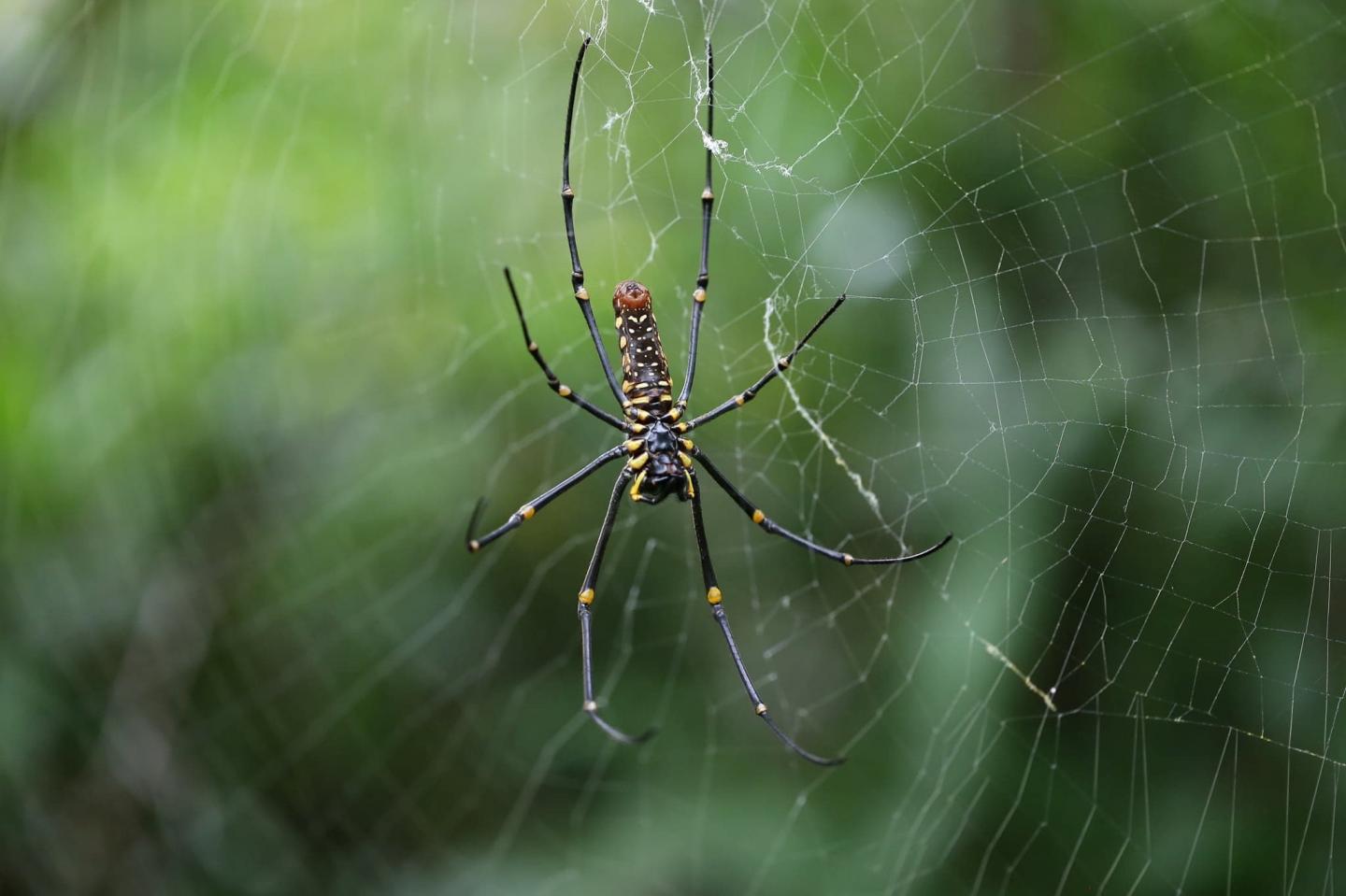 Researchers from Australia, Singapore, Taiwan and the UK placed cardboard cut-out models of the golden orb-weaver, Nephila pilipes, onto real webs in the field. Testing different combinations of colours and patterns they discovered that both the yellow colour and the black and yellow mosaic pattern are essential for luring prey during the day.

The webs of Nephila pilipes also capture prey during the night, and the experiments demonstrated that the yellow colour alone was very effective at luring nocturnal insects.

Orb-weaving spiders are found in different light conditions, and comparisons between many different species revealed a link between light environments and orb-weaver body colour patterns. Species that build their webs in well-lit environments are more likely to evolve the yellow mosaic colour pattern, found to be so effective at luring prey in these experiments.

However, this colour pattern rarely evolves in species that have little opportunity to lure prey, perhaps because they are concealed in a retreat or build their webs in dark caves.

Dr Po Peng, lead author of the study, said, “Our discoveries indicate that the effectiveness of colour-luring to attract prey might be a major driver for the yellow mosaic pattern being present in distantly related orb-weaver spiders.”

The significance of the yellow colour may be due to yellow pollen and flower heads being common in flowers that signal to diurnal (active during the day) pollinators. Previous research has also found that some nocturnal (active at night) lepidoptera (moths and butterflies) can discriminate colours under dim light conditions and innately prefer yellow.

Orb weaving spiders comprise around 12,500 species, making up 28% of the 45,000 described spider species. The groups defining trait is that they construct webs which they sit in the middle of to forage for prey.

The researchers conducted the field experiments at Huayan Mountain in Taiwan between 2008 – 2009. They created five types of carboard models that looked like Nephila pilipes with their legs outstretched. One accurately mimicked the spiders’ natural colouration (shown in video). The second had blue spots rather than yellow to test the importance of colour. The third amalgamated the combined area of the yellow into one area to test the importance of the pattern. The fourth and fifth model types were entirely yellow and entirely black.

“To find paper with colour properties most similar to the body parts of N. pilipes, Szu-Wei Chen (co-author) and I did several tours over dozens of stationery stores collecting samples and measuring their reflectance.” Said Po Peng.

In the field experiments the researchers removed a live spider from its web and randomly selected one of the models to be placed in the centre. They recorded the responses of insects to the cardboard spiders, collecting a combined 1,178 hours of video footage over day and night.

In this study the researchers only looked at the effects of the spiders’ colour and pattern on luring prey and not how they’re perceived by predators.

“Previous studies suggest that the area of bright body parts is constrained by diurnally active, visually hunting predators” said Po Peng, “But our results indicated that the yellow mosaic pattern on nocturnal spiders does not represent a trade-off between prey attraction and predator avoidance.”

The effect of both colour and pattern on risk from predators or parasitoids is something the researchers feel warrants further investigation.