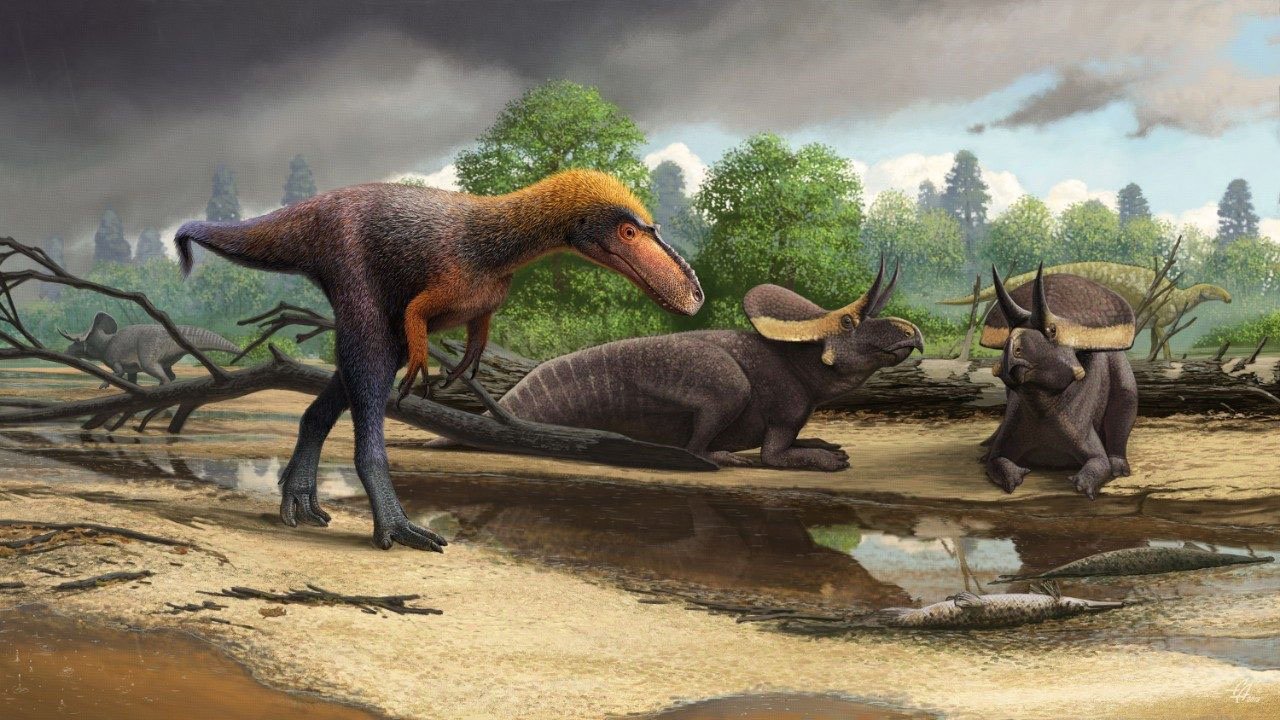 A new relative of the Tyrannosaurus rex – much smaller than the huge, ferocious dinonsaur made famous in countless books and films, including, yes, “Jurassic Park” – has been discovered and named by a Virginia Tech paleontologist and an international team of scientists.

The newly named tyrannosauroid dinosaur – Suskityrannus hazelae – stood rougly 3 feet tall at the hip and was about 9 feet in length, the entire animal only marginally longer than the just the skull of a fully grown Tyrannosaurus rex, according to Sterling Nesbitt, an assistant professor with Department of Geosciences in the Virginia Tech College of Science. In a wild twist to this discovery, Nesbitt found the fossil at age 16 whilst a high school student participating in a dig expedition in New Mexico in 1998, led by Doug Wolfe, an author on the paper.

In all, Suskityrannus hazelae is believed to have weighed between 45 and 90 pounds. The typical weight for a full-grown Tyrannosaurus rex is roughly 9 tons. Its diet likely consisted of the same as its larger meat-eating counterpart, with Suskityrannus hazelae likely hunting small animals, although what it hunted is unknown. The dinosaur was at least 3 years old at death based on an analysis of its growth from its bones.

The fossil dates back 92 million years to the Cretaceous Period, a time when some of the largest dinosaurs ever found lived.

“Suskityrannus gives us a glimpse into the evolution of tyrannosaurs just before they take over the planet,” Nesbitt said. “It also belongs to a dinosaurian fauna that just proceeds the iconic dinosaurian faunas in the latest Cretaceous that include some of the most famous dinosaurs, such as the Triceratops, predators like Tyrannosaurus rex, and duckbill dinosaurs like Edmotosaurus.”

The findings are published in the latest online issue of Nature Ecology & Evolution. In describing the new find, Nesbitt said, “Suskityrannus has a much more slender skull and foot than its later and larger cousins, the Tyrannosaurus rex. The find also links the older and smaller tyrannosauroids from North America and China with the much larger tyrannosaurids that lasted until the final extinction of non-avian dinosaurs.

Two partial skeletons were found. The first included a partial skull that was found in 1997 by Robert Denton, now a senior geologist with Terracon Consultants, and others in the Zuni Basin of western New Mexico during an expedition organized by Zuni Paleontological Project leader Doug Wolfe.

The second, more complete specimen was found in 1998 by Nesbitt, then a high school junior with a burgeoning interest in paleontology, and Wolfe, with assistance in collection by James Kirkland, now of the Utah Geological Survey. “Following Sterling out to see his dinosaur, I was amazed at how complete a skeleton was lying exposed at the site,” Kirkland said.

For much of the 20 years since the fossils were uncovered, the science team did not know what they had.

“Essentially, we didn’t know we had a cousin of Tyrannosaurus rex for many years,” Nesbitt said. He added the team first thought they had the remains of a dromaeosaur, such as Velociraptor. During the late 1990s, close relatives Tyrannosaurus rex simply were not known or not recognized. Since then, more distant cousins of Tyrannosaurus rex, such as Dilong paradoxus, have been found across Asia.

The fossil remains were found near other dinosaurs, along with the remains of fish, turtles, mammals, lizards, and crocodylians. From 1998 until 2006, the fossils remain stored at the Arizona Museum of Natural History in Mesa, Arizona. After 2006, Nesbitt brought the fossils with him through various postings as student and researcher in New York, Texas, Illinois, and now Blacksburg. He credits the find, and his interactions with the team members on the expedition, as the start of his career.

“My discovery of a partial skeleton of Suskityrannus put me onto a scientific journy that has framed my career,” said Nesbitt, also a member of the Virginia Tech Global Change Center. “I am now an assistant professor that gets to teach about Earth history.”

The name Suskityrannus hazelae is derived from “Suski,” the Zuni Native American tribe word for “coyote,” and from the Latin word ‘tyrannus’ meaning king and ‘hazelae’ for Hazel Wolfe, whose support made possible many successful fossil expeditions in the Zuni Basin. Nesbitt said permission was granted from the Zuni Tribal Council to use the word “Suski.”