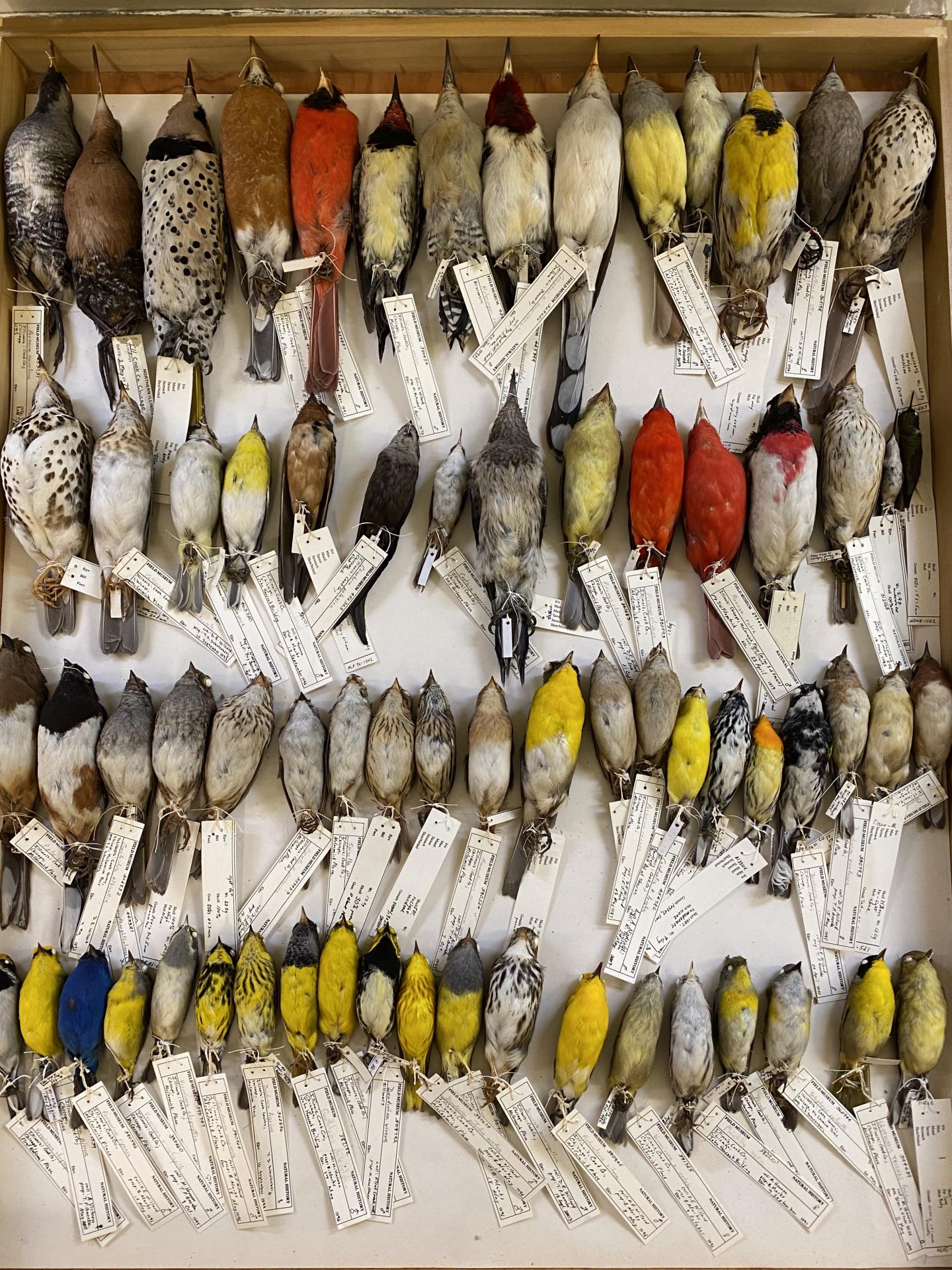 Those are the main findings from a new University of Michigan-led analysis of a dataset of some 70,000 North American migratory birds from 52 species that died when they collided with buildings in Chicago.

Since 1978, Field Museum personnel and volunteers have retrieved dead birds that collided with Chicago buildings during spring and fall migrations. For each specimen, multiple body measurements are made.

The research team analyzed this remarkably detailed dataset to look for trends in body size and shape. The biologists found that, from 1978 through 2016, body size decreased in all 52 species, with statistically significant declines in 49 species.

Over the same period, wing length increased significantly in 40 species. The findings are scheduled for publication Dec. 4 in the journal Ecology Letters.

“We had good reason to expect that increasing temperatures would lead to reductions in body size, based on previous studies. The thing that was shocking was how consistent it was. I was incredibly surprised that all of these species are responding in such similar ways,” said study lead author Brian Weeks, an assistant professor at the U-M School for Environment and Sustainability.

The senior author is Benjamin Winger of the U-M Department of Ecology and Evolutionary Biology and the Museum of Zoology. Weeks worked on the project as a postdoctoral researcher in Winger’s lab. Co-authors include David E. Willard, the Field Museum ornithologist and collections manager emeritus who measured all 70,716 birds analyzed in the study.

The new study is the largest specimen-based analysis of body-size responses to recent warming, and it shows the most consistent large-scale responses for a diverse group of birds, Weeks said.

Several lines of evidence suggest a causal relationship between warming temperatures and the observed declines in avian body size, according to the researchers. The strongest evidence is that – embedded within the long-term trends of declining body size and increasing temperature – there are numerous short-term fluctuations in body size and temperature that appear to be synchronized.

“Periods of rapid warming are followed really closely by periods of decline in body size, and vice versa,” Weeks said. “Being able to show that kind of detail in a morphological study is unique to our paper, as far as I know, and it’s entirely due to the quality of the dataset that David Willard generated.”

“It’s really been a herculean effort on the part of Dave and others at the Field Museum, including co-author Mary Hennen, to get such valuable data from birds that might otherwise have been discarded after they died from building collisions,” Winger said.

Within animal species, individuals tend to be smaller in warmer parts of their range, a pattern known as Bergmann’s rule. And while the possibility of body size reduction in response to present-day global warming has been suggested for decades, evidence supporting the idea remains mixed.

The uncertainty is likely due, in part, to the scarcity of datasets like the Field Museum trove.

For each bird, Willard measured the length of a lower leg bone called the tarsus, bill length, wing length, and body mass. In birds, tarsus length is considered the most precise single measure of within-species variation in body size.

The data analysis revealed that:

Studies of plant and animal response to climate change often focus on shifts in the geographical range of a species or the timing of events such as springtime flowering and migration. The consistency of the body-size declines reported in the new study suggests that such changes should be added to the list of challenges facing wildlife in a rapidly warming world, Weeks said.

“It’s clear that there’s a third component – changes in body size and shape – that’s probably going to interact with changes in range and changes in timing to determine how effectively a species can respond to climate change,” he said.

Long-distance bird migration is one of the most impressive feats in the animal kingdom. The extreme energetic demands of flying thousands of miles have shaped the morphology of migrating birds – their form and structure – for efficient flight.

The authors of the Ecology Letters paper suggest that the body-size reductions are a response to climate warming and that increased wing length may help offset the body-mass losses.

The researchers plan to test that idea in a follow-up project, which will again make use of the Field Museum dataset. They’ll also look further into the mechanism behind the body size and shape changes and whether they are the result of a process called developmental plasticity, the ability of an individual to modify its development in response to changing environmental conditions.

The birds analyzed in the study are small-bodied songbirds that breed north of Chicago in the summer and migrate through the region in high numbers. Several species of sparrow, warbler and thrush make up the majority of the dataset, with thousands of individuals of each species documented as lethal collisions.

The observed changes in avian body size and shape are subtle – at most a couple grams’ difference in body mass and a few millimeters in wing length – and are not detectable with the naked eye. The Field Museum bird collision dataset highlights the value of natural history museum specimen collections, which help scientists understand how nature changes through time, the authors note.

“When we began collecting the data analyzed in this study, we were addressing a few simple questions about year-to-year and season-to-season variations in birds,” said the Field Museum’s Willard. “The phrase ‘climate change’ as a modern phenomenon was barely on the horizon. The results from this study highlight how essential long-term data sets are for identifying and analyzing trends caused by changes in our environment.”