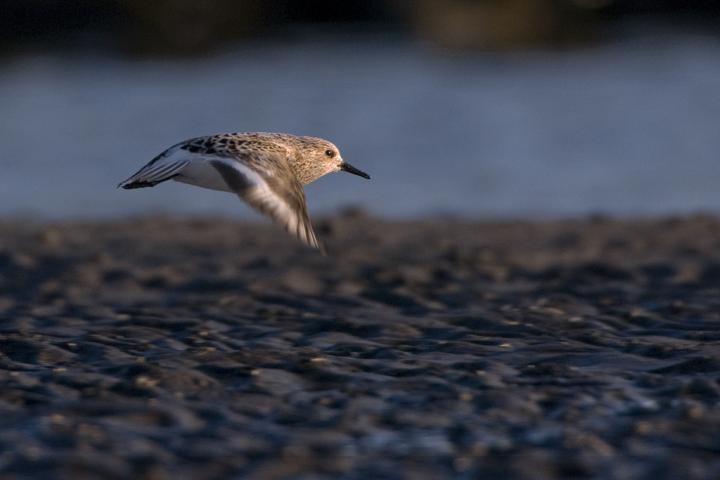 Migratory sandpipers breeding in Greenland who choose to spend the winter in West Africa instead of elsewhere along the East Atlantic coast have a lower chance of survival, are more likely to skip their first breeding season and arrive later at their breeding grounds. An article in the Journal of Animal Ecology, spearheaded by researcher Jeroen Reneerkens (University of Groningen and the Royal Netherlands Institute for Sea Research, NIOZ), challenges the widely held idea that the costs of longer migratory flights are inevitably offset by benefits in the winter habitats.

The sanderling is a small migratory shorebird that breeds on the high arctic tundra. In late summer, it migrates to beaches in tropical or temperate regions. Beach visitors may know them as the grey-white birds that run back and forth in front of the waves. Their annual migratory flights vary between 3,700 and 22,000 km. When Greenlandic sanderlings are a few months old, they choose a winter habitat in a coastal area somewhere between Scotland and Namibia, such as the Wadden Sea Islands. They remain faithful to that location for the rest of their lives, only interrupted by long annual flights to Greenland to breed.

An international research team, led by Dr. Jeroen Reneerkens of the University of Groningen and NIOZ, wondered why one sanderling may choose to stay in the United Kingdom for the winter, while another from the same breeding population migrates all the way to Namibia. For seven years, they studied the pros and cons of spending the winter in several locations in Europe and Africa. The team used color-rings to individually tag thousands of birds, which were then observed and reported by a large international network of birdwatchers. This allowed the researchers to accurately estimate both the survival probabilities and the timing of migration.

Sanderlings wintering in West Africa were worse off compared to sanderlings wintering in Europe or further south in Africa. The research undermines a widely held idea among biologists, namely that favorable conditions in the winter habitat make up for the long, arduous flights. The researchers suspect that little and/or low-quality food just before leaving the tropical wintering habitat may explain why sanderlings in West Africa are more likely to die young, arrive late at the breeding grounds and young birds are more likely to spend their first summer in tropical Africa and thus skip their first possible breeding opportunity.

‘During migration, sanderlings from West Africa may be more likely to run out of fuel, or they may be forced to make an extra landing causing delays. Sanderlings from Namibia, on the other hand, fly across Africa in one go in the spring, which is more than 6,000 km. Yet, this has no impact on their survival or timing of migration. They can only do this if there is enough food in Namibia to fuel up. At the same time, it also suggests that birds actively avoid West Africa in the spring, possibly because there is too little food.’

These results raise new questions. ‘For example, to what extent can the Wadden Sea compensate for the migratory problems of sanderlings wintering in tropical West Africa?’, says Jeroen Reneerkens.