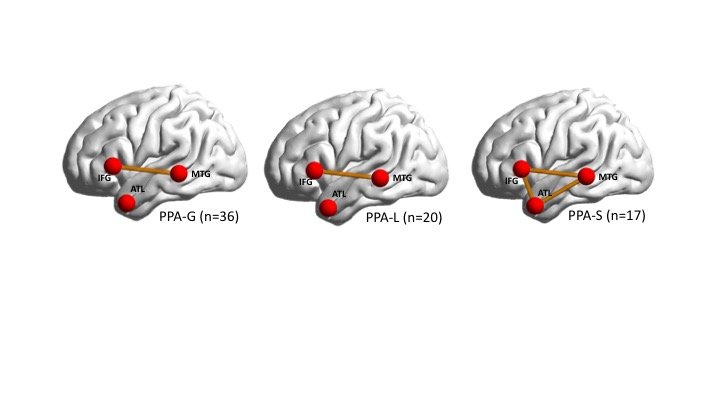 For the first time, Northwestern Medicine scientists have pinpointed the location of dysfunctional brain networks that lead to impaired sentence production and word finding in primary progressive aphasia (PPA), a form of dementia in which patients often lose their language rather than their memory or thought process.

With this discovery, the scientists have drawn a map that illustrates three regions in the brain that fail to talk to each another, inhibiting a person’s speech production, word finding and word comprehension. For example, some people can’t connect words to form sentences, others can’t name objects or understand single words like “cow” or “table.”

The map can be used to target those brain regions with therapies, such as transcranial magnetic stimulation (TMS), to potentially improve an affected person’s speech.

PPA occurs in patients with neurodegenerative disorders, including Alzheimer’s disease and frontotemporal degeneration.

Interactions among three main regions in the brain is responsible for how people process words and sentences. PPA occurs when there is a lack of connectivity among these areas. Different patterns of connectivity failure among these regions can cause different subtypes of PPA.

The findings will be published Sept. 1 in the journal Cortex. The large study (73 patients) recruited from the extensive pool of patients with PPA at Northwestern’s Cognitive Neurology and Alzheimer Disease Center, one of the largest centers in the world.

The study used functional MRI, which monitors brain activity by detecting blood flow, to locate the regions of the brain that are talking to each other or not. That cannot be shown with structural MRI.

Previous research used structural MRI to locate only regions of the brain that had atrophied, and scientists did not clearly know how physiological impairment in these regions correlated with symptoms a patient was experiencing. This study is novel because it examined brain regions that were still functional (had not atrophied) and focused on the networks among the functional regions to see if they were connecting or not. This allowed the scientists to correlate the functional areas in the brain with symptoms of patients with PPA.

“Previous studies of structural changes in the brain were like archeology, in which scientists were locating areas of the brain that had already died,” Bonakdarpour said. “But we are looking at the parts of the brain that are still alive, which makes them much easier to target with treatment.”

Bonakdarpour and his colleagues have begun testing TMS on the three targeted brain regions in healthy individuals with the goal of applying it to patients with PPA in a future clinical trial.