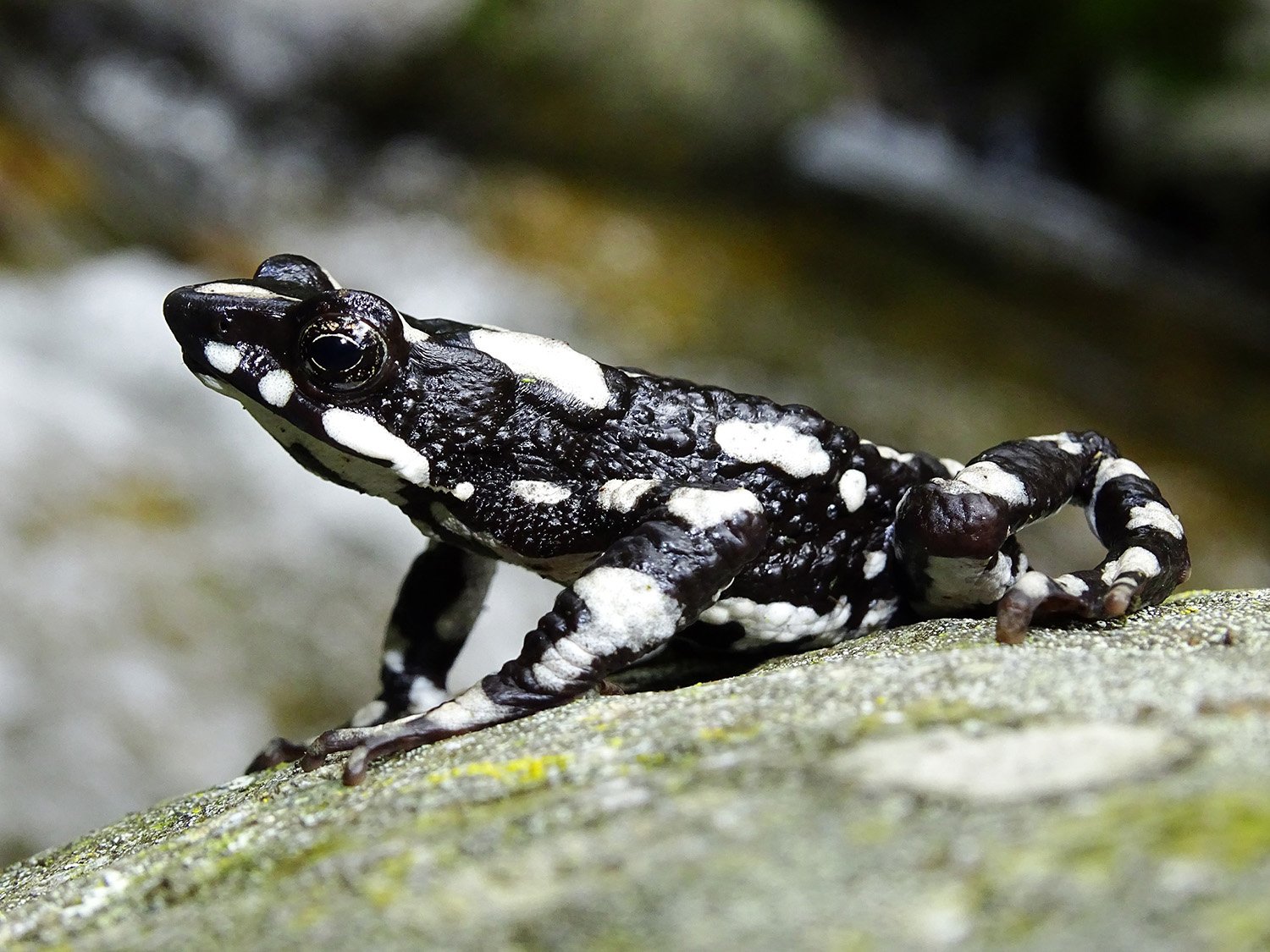 For the first time since 1991, biologists have documented the stunning black-and-white-spotted starry night harlequin toad (Atelopus aryescue). The photo documentation is the result of a unique and poignant partnership between Global Wildlife Conservation partner Fundación Atelopus—a Colombian NGO—and the indigenous Arhuaco people of the Sogrome community in Colombia’s Sierra Nevada de Santa Marta, the tallest coastal mountain on Earth.

“While harlequin toads across Latin America at these higher altitudes have largely vanished over the past three decades as the result of a deadly fungal pathogen, it turns out that the starry night harlequin toad has bucked the trend,” said Lina Valencia, Colombia conservation officer at Global Wildlife Conservation. “This is a powerful story about how working with indigenous and local communities can help us not just find species lost to science, but better understand how some species are surviving and how we can conserve the natural world in a way that connects spiritual and cultural knowledge. We are tremendously grateful to the Arhuaco people for giving us this opportunity to work with them.”

The starry night harlequin toad, known as ‘gouna’ to the Arhuaco people, is classified as critically endangered by the IUCN Red List of Threatened Species. Although it had been lost to science for nearly 30 years, it has never been lost to members of the Sogrome community, who have always lived in harmony with the toad in their shared home in the Sierra Nevada de Santa Marta and have historically protected the amphibian, its habitat and the other wildlife living there.

“The Sierra Nevada de Santa Marta is a place that we consider sacred, and harlequin toads are guardians of water and symbols of fertility,” said Kaneymaku Suarez Chaparro, a member of the Sogrome community and a biology student at the Francisco José de Cladas District University. “We manage our resources and conserve our home as the law of origin dictates, which means that we live in balance with Mother Earth and all of the life here. Now we have a great opportunity to bring together two worldviews for the protection and preservation of the Sierra species: the Western scientific knowledge and the indigenous scientific, cultural and spiritual knowledge.”

The starry night harlequin toad has not been scientifically documented in nearly 30 years in part because biologists have not had access to its habitat. However, for the community of Sogrome and their representative Ruperto Chaparro Villafaña, the toad is a legitimate authority of the natural world—an indicator that signals when to take actions like planting crops or performing spiritual ceremonies—that has inspired their ancestral culture for thousands of years.

For this reason, the Sogrome community has chosen the starry night harlequin toad as a flagship for their community-based project, Amas la Sierra. The project is aimed at demonstrating that it is possible for humans to accomplish their goals while maintaining the equilibrium of Earth, even achieving economic growth through the preservation of nature. Given their shared interests to protect nature, a partnership with Fundación Atelopus seemed like a natural fit. But for the biologists to obtain permission to make the eight-hour hike to co-document the starry night harlequin toad for the rest of the world required first building a relationship with the indigenous community.

After four years of dialogue among Fundación Atelopus, Villafaña and Sogrome spiritual leaders, called mamos, the Fundación Atelopus team was allowed in April of this year to see the toad without taking photos (a test of trust the Arhuaco call “resisting temptation”). Then after a series of gatherings with the community, the biologists awaited word from the mamos, who consulted with nature about the team’s intentions and whether they genuinely shared the community’s interest in protecting the Sierra Nevada before granting them permission to visit the toad again on a GWC-funded expedition to get photographs.

“It is an incredible honor to be entrusted with the story of the starry night harlequin toad and the story of the Sogrome community’s relationship with it,” said Fundación Atelopus vice president and biologist José Luis Pérez-González. “We were hoping to find one individual of the starry night harlequin toad, and to our great surprise we found a population of 30 individuals. We were full of joy and hope as we had the chance to observe a healthy population from a genus for which very few species remain.”

The next steps will involve Fundación Atelopus, Suarez Chaparro and Villafaña Chaparro sitting down with the mamos and authorities of the community to continue discussing the role of the Sierra and its wildlife, to establish a monitoring program for the starry night harlequin toad, and to bring together both the scientific and spiritual perspectives to best continue protecting the amphibian.

Eighty of the known 96 harlequin toad species are endangered, critically endangered or extinct in the wild, according to the IUCN Red List of Threatened Species, as the result of infectious disease, habitat destruction and degradation, invasive species and climate change. As of 2018, 37 harlequin toad species had disappeared from their known homes and have not been seen since the early 2000s, despite efforts to find them. The starry night harlequin toad is one of four harlequin toads with seemingly steady populations living in mid-to-high-level elevations in the Sierra Nevada de Santa Marta, surprising biologists who associate high-elevation habitats with dramatic amphibian declines.

“With the starry night harlequin toad records, we confirm that Sierra Nevada de Santa Marta is one of the most important sites for the conservation of harlequin toads in Latin America,” said Luis Alberto Rueda, professor at Universidad del Magdalena and Fundación Atelopus cofounder. “And thanks to the indigenous communities like Sogrome, this special place continues to be a sanctuary for these special animals.”