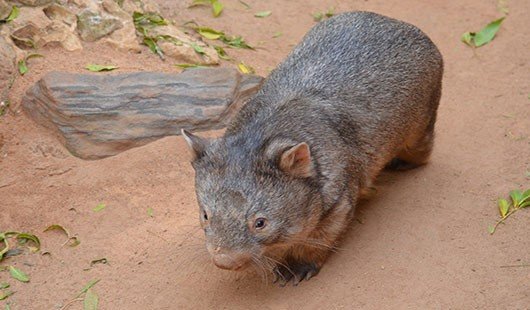 Flexible jaws may help wombats better survive in a changing world by adapting to climate change’s effect on vegetation and new diets in conservation sanctuaries.

An international study, co-led by The University of Queensland’s Dr Vera Weisbecker, has revealed that wombat jaws appear to change in relation to their diets.

“Scientists had long suspected that native Australian marsupial mammals were limited in being able to adapt their skull in this way. But in good news, our research has contradicted this idea.”

The team used a technique known as geometric morphometrics – the study of how shapes vary – to characterise skull shape variation within three different species of wombat, with each species having a slightly different diet.

The data were collected with computed tomography – known to most as CT scanning – and analysed with new computation techniques developed by UQ’s Dr Thomas Guillerme.

Dr Olga Panagiotopoulou, who co-led the research project from the Monash Biomedicine Discovery Institute, said the study suggested that short-term jaw and skull adaptation was occurring.

“It seems that individuals within each wombat species differ most where their chewing muscles attach, or where biting is hardest,” Dr Panagiotopoulou said. “This means that individual shapes are related to an individual’s diet and feeding preferences. Their skulls seem to be changing to match their diets. There are a number of factors that can influence skull shape, but it seems that wombats are able to remodel their jaws as the animals grow to become stronger and protect themselves from harm.”

Dr Weisbecker said the team was particularly excited that the critically endangered northern hairy-nosed wombat, with around 250 individuals left, seemed to be able to adapt to new diets.

“In order to protect endangered animals, it’s sometimes necessary to translocate them to new sanctuary locations where threats are less, but diets may be quite different,” she said. “Our findings suggest that future generations of these northern hairy-nosed wombats will adapt well to a different diet in a new home.

The researchers are planning to use a similar analysis on koala skull shapes.

Funding was provided by The Wombat Foundation and the Australian Research Council.

The study is published in Frontiers in Zoology.