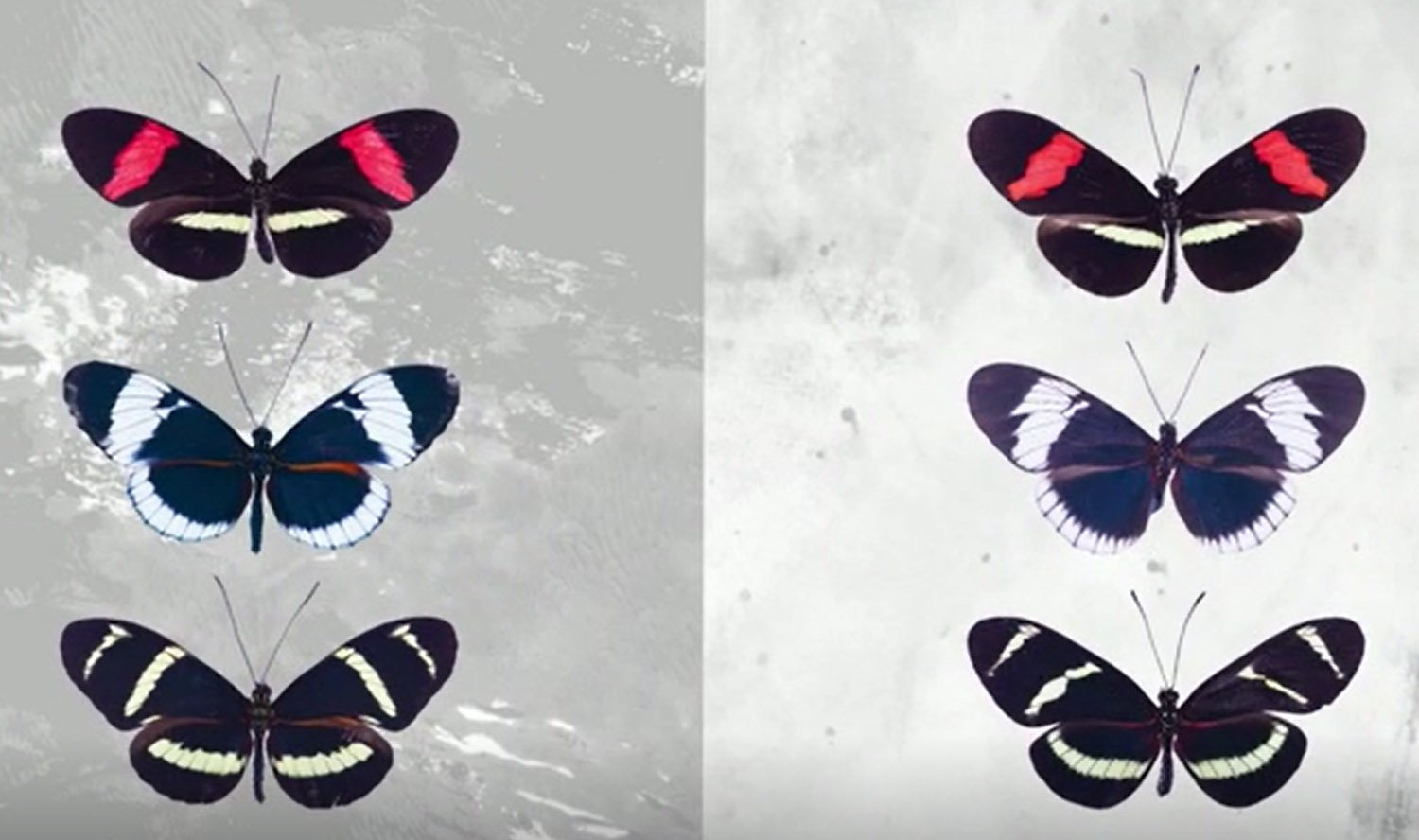 An international team of scientists working with Heliconius butterflies at the Smithsonian Tropical Research Institute (STRI) in Panama was faced with a mystery: How do pairs of unrelated butterflies from Peru to Costa Rica evolve nearly the same wing-color patterns over and over again? The answer, published in Current Biology, forever changes the way evolution is understood.

“Our team is the first to report that although evolution of similar color patterns in Heliconius may be driven by similar forces – like predators avoiding a particular kind of butterfly – the pathway to that outcome is not predictable,” said Carolina Concha, lead author of the paper and a post-doctoral fellow at STRI. “This really surprised us because it reveals the importance of history and chance in shaping the genetic pathways leading to butterfly wing-pattern mimicry.”

Heliconius‘ bright wing colors signal to bird predators that the butterflies are toxic. Flashy male wing patterns signal to females that they are choosing the right species to mate with. Somehow these two forces, predation and mating, lead to similar wing patterns in groups of butterflies isolated in the mountain valleys and foothills of the Andes. By knocking out a single gene called WntA in 12 different species and their variants, the molecular biologists on the team could tell whether the butterflies in a pair with the same wing patterns were using the same genetic pathways to color and pattern their wings. They were not.

“Imagine two teams given the same Lego blocks are asked to build the same device,” said Arnaud Martin, co-author and head of the Butterfly Evo-Devo Lab at George Washington University. “Each team goes about the task in a different way, but in the end, the result is the same. Butterflies face much more serious challenges: they build structures made of wing scales that are essential to their survival and ability to reproduce.”

Questions regarding butterfly mimicry have intrigued biologists for decades, but the technology to selectively remove a single gene in a live organism did not exist until about five years ago. Now, with CRISPR/Cas 9 gene editing, it is getting much easier to tinker with the genetic code. When researchers knock out a major patterning gene like WntA, it changes the microscopic structure and color of the scales that compose the butterfly’s wing and, as a result, the pattern changes. The study raises a number of questions, such as how WntA interacts with other genes to end up with an area that is red or black. Now the team wants to know how the WntA gene is controlled.

“We learned that while a developmental gene (WntA) can have a broad role in the evolution of most butterfly wing color patterns, its precise use to color a butterfly’s wing is not completely predictable,” said Riccardo Papa, co-author and professor at the University of Puerto Rico. “Distinct species with identical wing-color patterns, such as co-mimetic butterflies, can evolve using different molecular strategies. Imagine the same notes played on different instruments!”

“Some people say that Panama was an indigenous word meaning abundance of butterflies,” said Owen McMillan, staff scientist and head of the ecological genomics lab at STRI. “The Smithsonian labs in Gamboa are certainly one of the best places in the world to understand how butterflies evolve, and we hope that inspired researchers will join us he