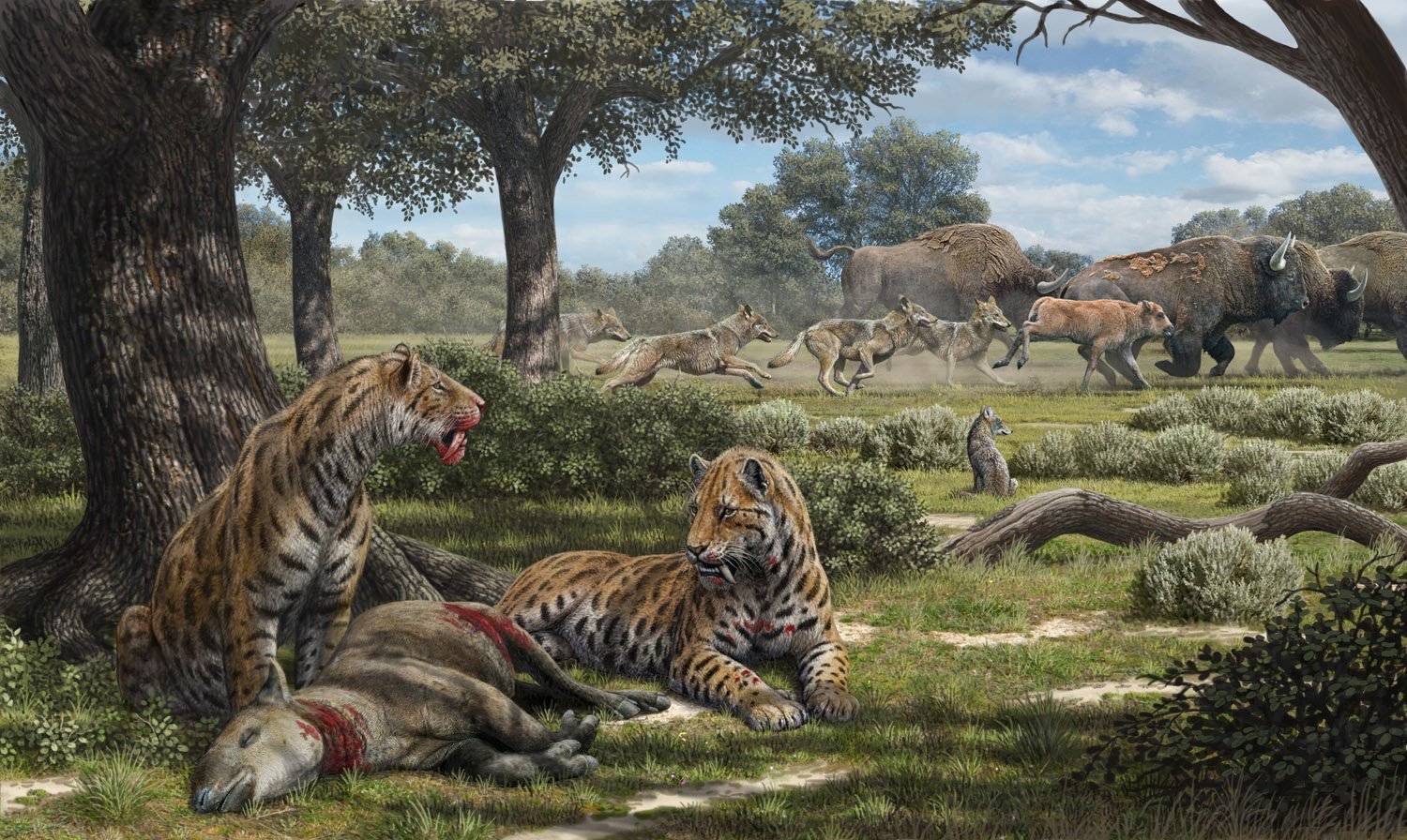 Larisa DeSantis, a Vanderbilt University paleontologist, grew up visiting the one-of-a-kind fossil site in Los Angeles, which contains fossils of predators that tried to eat horses, bison and camels stuck in the tar over the past 50,000 years and themselves became trapped, offering the best opportunity to understand Ice Age animals facing climate change. The Pleistocene Epoch spanned 2.6 million years ago to about 10,000 years ago, encompassing multiple glacial and interglacial periods and the arrival of humans, one or both of which forced predators to adapt their diets or die.

DeSantis spent the last decade visiting La Brea, studying the teeth of extinct species such as American lions, saber-toothed cats and dire wolves; and teeth from ancient animals whose offspring are still alive today, such as gray wolves, cougars and coyotes. Her work revealed that competition for prey among carnivores wasn’t a likely cause of the Pleistocene megafaunal extinction as formerly believed, because, like dogs and cats of today, one preferred running after herbivores in the open fields, while the other preferred stalking them in forested areas.

“Isotopes from the bones previously suggested that the diets of saber-toothed cats and dire wolves overlapped completely, but the isotopes from their teeth give a very different picture,” said DeSantis, an associate professor of biological sciences at Vanderbilt.

“The cats, including saber-toothed cats, American lions and cougars, hunted prey that preferred forests, while it was the dire wolves that seemed to specialize on open-country feeders like bison and horses.  While there may have been some overlap in what the dominant predators fed on, cats and dogs largely hunted differently from one another.”

To study these ancient predators, she employs dentistry – taking molds of the teeth and shaving off tiny bits of enamel for chemical analysis. Information about everything the animal ate lies within the isotopes, she said. Further, the microscopic wear patterns on teeth can clarify who was eating flesh or scavenging on bones.

It’s likely that those giant predators went extinct due to climate change, the arrival of humans to their environment or a combination of the two, she said, and her team is working to clarify the cause of the extinction with multiple colleagues across six institutions as part of a separate on-going study.

What they know is predators alive today in the Americas were better able to adapt their diets. Instead of only feeding on large prey, they could effectively hunt small mammals, scavenge what they could from carcasses or do both.

“The other exciting thing about this research is we can actually look at the consequences of this extinction,” DeSantis said.

“The animals around today that we think of as apex predators in North America – cougars and wolves – were measly during the Pleistocene. So when the big predators went extinct, as did the large prey, these smaller animals were able to take advantage of that extinction and become dominant apex-predators.”

An even more detailed picture of ancient life at La Brea is contained in the paper “Causes and consequences of Pleistocene megafaunal extinctions as revealed from Rancho La Brea mammals,” published today in the journal Current Biology.