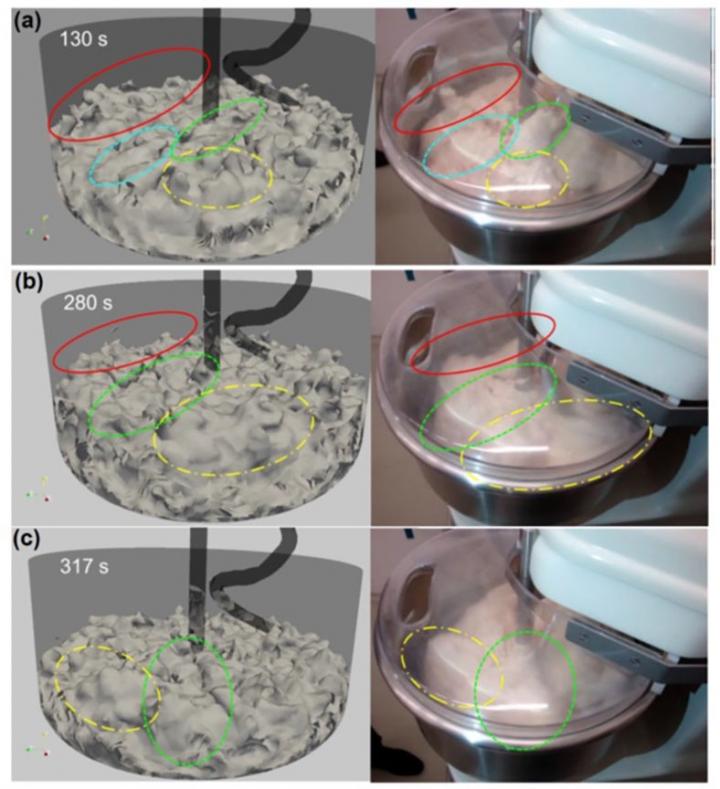 Bakers have been crafting bread for more than 6,000 years with four simple ingredients: flour, salt, water and yeast. Apart from using high-quality ingredients, the kneading process and amount of time the dough is given to rise ultimately determine the bread’s quality.

During kneading, air is incorporated into the dough matrix, which develops the gluten network that forms the structure of the bread. It’s important not to overknead the dough, because this leads to a dense and tight dough due to a reduced water absorption capacity that impairs its ability to rise. But bakers also want to avoid underkneading the dough, because this decreases its gas retention capacity. Despite the need to get kneading just right, no tools exist to automatically control the kneading process.

In Physics of Fluids, from AIP Publishing, researchers from the Technical University of Munich describe their work exploring the local mechanical and microstructural changes that occur during the different stages of the kneading process via numerical simulation.

Bread dough is a complex material whose mechanical properties are somewhere between those of a viscous liquid and an elastic solid.

“Because of its elasticity, dough overcomes gravitational forces during kneading and moves toward the rotating rod, then climbs up it. If you’ve ever used a kneader or mixer to make dough in your kitchen, you’ve probably observed this phenomenon,” said co-author Natalie Germann.

The researchers are using 3D computer simulations that consider viscous and elastic properties, as well as the free surface formed between the air and the dough. They then create computer geometries based on CAD drawings of real industrial kneaders to obtain predictions as close to reality as possible.

These simulations provide essential information about what’s happening inside and on the dough’s surface over time, such as the incorporation of air into the matrix, and dough pocket formation and breakup.

This is the first known 3D dough kneading simulation conducted within an industrial kneader.

“Previous works considered only the purely viscous properties of the bread dough and restricted their simulations to extremely simplified geometries such as a concentric cylinder setup,” said Germann.

In those other works, without considering the elasticity of the material, normal stress effects responsible for the rod-climbing phenomenon are absent.

“Our computer simulations showed that vertical mixing isn’t as good as the radial mixing in the spiral kneader we considered in our work. In the future, mixing performance may be enhanced by using a more highly curved spiral arm or two spiral arms similar to kneading by hand.”