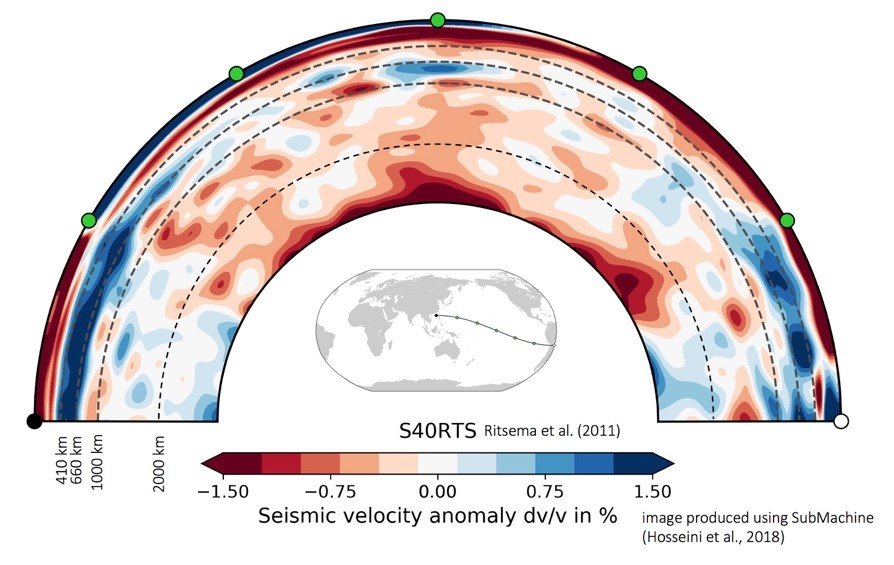 For around 30 years scientists have known of continent sized regions in the Earth’s interior nearly 3000 km below the surface. These regions have been the subject of extensive research and many ideas have been put forward to explain what they are, with some people even thinking that they may have existed the Earth formed over 4.5 billion years ago. However, a group of scientists have shown that they may instead be made from bits of the Earth’s surface crust which have sunk 1,000s of kms to, almost to the Earth’s core.

A cross-section through an Earth shear-wave velocity model which shows the large continent-sized low velocity regions that might be enriched in calcium perovskite. These appear as the large, red-coloured slow velocity anomalies sitting on the core-mantle boundary at ~ 2500-3000 km depth below the surface. Provided by UCL[/caption]

Most of the Earth’s crust is made from a rock called basalt. Where two plates meet due to sea-floor spreading, the high density of basalt causes it to sink – or subduct – into the Earth’s interior. As these basaltic rocks travel deeper into the Earth they are exposed to higher pressures and temperatures and undergo various reactions. One result of these reactions is the production of calcium silicate perovskite (Ca-Pv), which is believed to be the third most abundant mineral at depths beyond 660 km in Earth’s mantle.

The knowledge of the Earth’s mantle has, until now, been limited due to the difficulties of studying Ca-Pv. “It is technically challenging because this mineral is unrecoverable to ambient conditions, so in order to study any of its properties you must work at the conditions of the Earth’s interior where it is stable. Pressures of over 100,000 atmospheres and temperatures above 1,000 °C”, explains Andrew Thomson, scientist at University College London. To make these measurements an international team of researchers performed experiments in the Large Volume Press at the European Synchrotron (ESRF), an instrument that is dedicated to the determination of physical characteristics of materials under high pressure and temperature conditions.

“The Large Volume Press at the ESRF is currently unique in Europe, where we can collect diffraction data in real time at pressure and temperature conditions relevant to the Earth’s interior”, says Wilson Crichton, the scientist in charge of the instrument. As well as collecting X-ray images and measuring Ca-Pv’s crystal structure, the team also measured the time taken for ultrasonic waves to travel through the samples at different pressure–temperature combinations. These allowed them to determine the structures, densities, sound-wave velocities and elastic properties of Ca-Pv at conditions of the Earth’s interior. Interestingly, the properties of Ca-Pv are not what was expected but allowed scientists to interpret some otherwise controversial ideas of the deep Earth.

“Our results suggest subducted oceanic crust will be visible as low velocity anomalies throughout the lower mantle. In particular, we have shown that large low-velocity provinces (LLVPs), which are continent-sized regions of anomalously low velocity seen at over 2500 km depth beneath Earth’s surface, can be explained as areas with moderate enrichment of recycled oceanic crust” explains Professor John Brodholt from University College London. “We also observed crystallographic phase transitions in Ca-Pv, which may explain other enigmatic seismic discontinuities observed between 800-1200 km” adds Thomson.