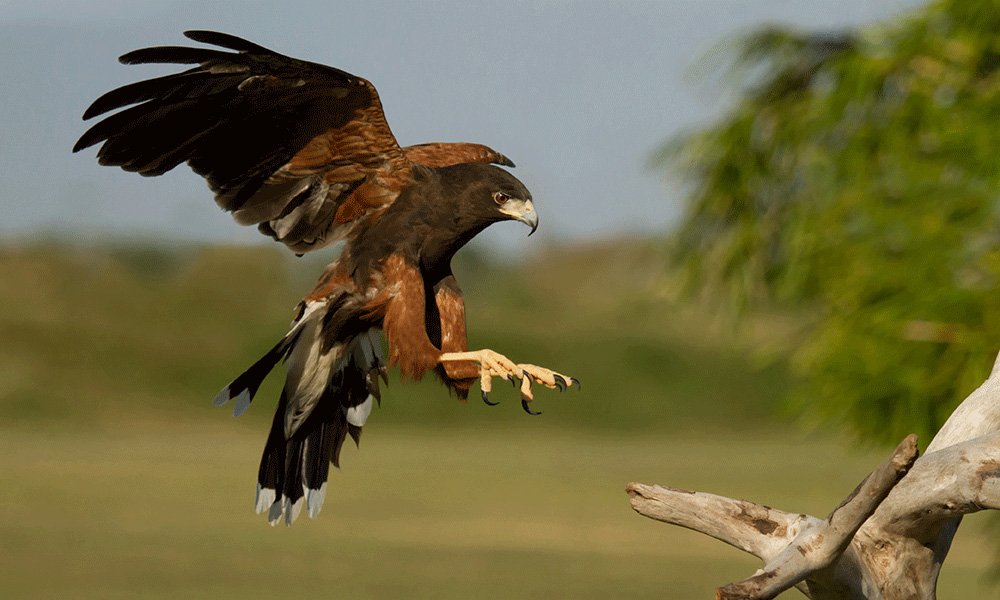 Previous research has shown that falcons intercept prey using the same guidance law as homing missiles, called proportional navigation. This guidance law is optimal against smoothly-manoeuvring aerial targets, but is prone to being thrown off by the zigzagging manoeuvres of terrestrial prey like hares or jackrabbits, and will not necessarily lead to a feasible flight path through the cluttered habitats that hawks frequent.

Dr Brighton said: ‘We filmed our hawks flying after a dummy bunny, which was an artificial target that we towed at speed around a series of pulleys laid out to produce an unpredictable course. Using video reconstruction techniques to measure the 3D trajectory of the hawk and its target, we then ran a computer simulation to see how closely the hawk’s attack behaviour was modelled by different kinds of guidance law.’

The researchers found that Harris’ Hawks use a mixed guidance law, in which their turn rate is determined by feeding back information on the angle between the direction to their target and their current flight direction, together with information on the rate at which the direction to their target is changing. The researchers argue that this mixed guidance law reduces the risk of overshoot in the close pursuits to which hawks are adapted, but would produce an inefficient flight path if used in the long-range interception behaviours of falcons.

The findings have applications to the design of drones for pursuing and capturing rogue drones in cluttered environments.

Prof Taylor said: ‘Last year’s Gatwick incident showed just how far we are from being able to remove rogue drones quickly and safely from a large open space, let alone the cluttered airspace of an urban environment. Hawks are masters of close pursuit through clutter, so we think they have a thing or two to teach us about how to design a new kind of drone that can safely chase down another.’