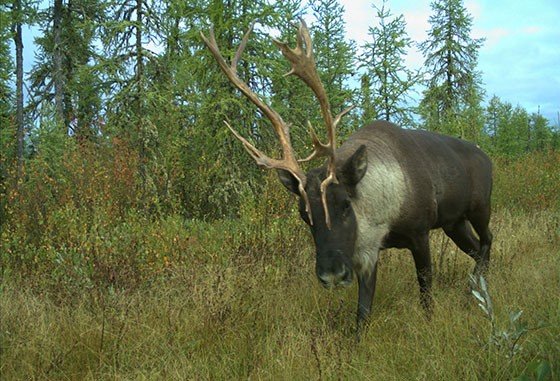 New UBC research suggests restoring habitat may not be enough to save threatened woodland caribou—an iconic animal that’s a major part of boreal forests in North America and a key part of the culture and economy of many Indigenous peoples in Canada.

Caribou populations have declined rapidly in recent decades across much of western Canada, including the oil sands region of northeastern Alberta. The researchers placed hidden cameras, known as “camera traps”, in the area to see if replanting seismic lines has helped protect caribou by separating them from predators and fellow prey moving through the area.

Seismic lines, which are narrow strips of land cleared to make way for oil and gas exploration, are thought to disturb caribou habitat and promote faster travel for predators and food competitors. These lines do not recover quickly naturally, but are now being restored through replanting with native trees and natural features like mounds and tree debris.

“In theory, restoration should have made it much more difficult for predators to travel across the caribou range, but our cameras showed us a different picture,” said lead author Erin Tattersall, who did the work as a master’s student in forest sciences at UBC.

Predators like black bears and wolves, and prey like moose, used the restored seismic lines about as much as they used unrestored lines. Only white-tailed deer—a key caribou competitor —showed less use of the restored lines. Caribou preferred to use lines located in low-lying wetland areas, as well as more isolated lines—whether they’d been restored or not.

“In other words, restoration did not do much to keep caribou apart from their predators and competitors, at least not in the short term,” Tattersall said.

The work, published last week in Biological Conservation, is one of the first to challenge the assumed impacts of a caribou recovery strategy, and researchers say it makes the case for more rigorous analysis of conservation methods.

“It’s possible caribou will eventually recover in the area we studied, and other restoration approaches in other regions could also prove more immediately effective for caribou recovery,” said senior author Cole Burton, a professor of forestry who leads the Wildlife Coexistence Lab at UBC. “But our results clearly show that we can’t simply assume the best–it’s necessary to closely monitor the actual results of restoration.”

And while the study focuses on Alberta caribou, it can also be important for discussions on saving B.C. caribou, Burton added.

“We are seeing steep declines in many of B.C.’s caribou populations, and even total losses of some,” he said. “Effective restoration of already degraded habitats will ultimately be critical to recovering our caribou.”

Researchers with the University of Victoria’s School of Environmental Studies and InnoTech Alberta’s ecosystems management unit also contributed to the study.