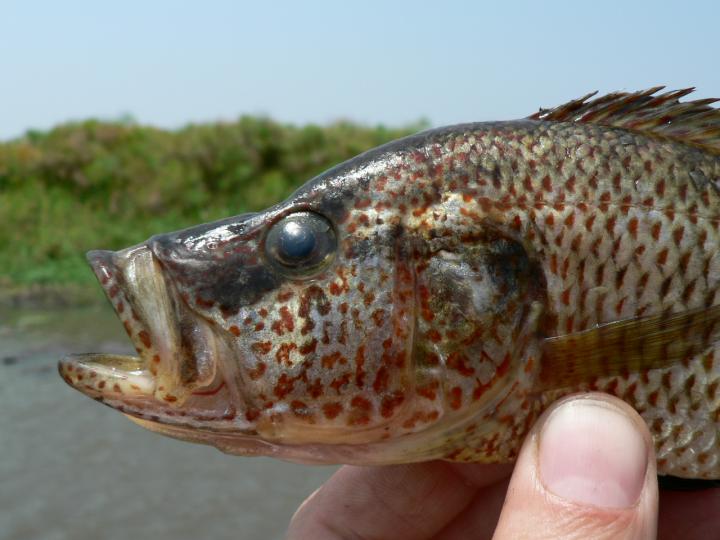 Fish will mate with a species outside their own if the male’s colouring is attractive enough or if the female can’t see him properly, according to new research.

Such ‘mistakes’ in mate choice can lead to the evolution of new species, an international team of scientists found. The group studied 2000 fish and analysed the DNA of more than 400 cichlid fish from two freshwater lakes in East Africa. They discovered more than 40 new species in Lake Mweru, which formed around one million years ago.

Dr Joana Meier, an evolutionary biologist at St John’s College, University of Cambridge, and lead author of the research published today (December 3 2019) in Nature Communications, said: “We found a dazzling variety of ecologically diverse new species – called radiations – that were previously unknown. The new species of cichlids adapted to use all the available food resources in the lake. Some feed on insect larvae, others zooplankton or algae. Some newly discovered fish are predators with large teeth, which we named ‘large-tooth serranchromines’.”

Many people assume fish are all the same species because they all live in water. But there are 30,000 different species of fish and many of them are markedly different from each other. Expecting them to mate outside of their own species is like expecting a horse to mate with a cat because they both have four legs and a tail.

Fossil records show fish have existed for more than 500 million years which makes them very old on the evolutionary scale. There are more than 1300 species of cichlids and many are popular aquarium fish. They are primarily freshwater fish and the majority of species are African, appearing in great diversity in the major African lakes where this 10-year study took place.

Female cichlid fish choose their partner and in mating ritual tests in the lab, the team of international scientists discovered that under certain circumstances the females would choose a male from different species that had similar colouring to males from their own species. They also found that when the light conditions are poor, the females could not distinguish between males of their own species or from other species because they could not see their colours properly.

This is what they determined happened a million years ago when the different species of fish mixed together when Lake Mweru was formed, sparking the evolution of 40 new species of fish.

Dr Meier explained: “To diversify into different species, the cichlid fish needed the ecological opportunity provided by the new habitats of Lake Mweru, formed one million years ago, which is still considered to be recent in evolutionary terms! That more than 40 species utilising different food resources and habitats could evolve so rapidly is highly unusual.

“When Lake Mweru was formed it combined cichlid lineages from the Congo and the Zambezi. The cichlids from these different drainage systems then mated with each other. This could have been because when the lake formed, the water was very cloudy and they couldn’t see colours properly so the females were not being as choosy about selecting a mate in their new environment. Mating between cichlids from different drainage systems produced very diverse offspring combining the genetic traits of both parental species.”

The so-called ‘hybrid offspring’ can feed on different things to their parents and invade new habitats – like swimming into deeper areas of the lake. It is unclear whether all of the species will survive as they may compete with each other and die out.

Dr Meier said: “Our research shows that hybridisation can fuel the evolution of new species which is a very novel finding. Hybridisation has traditionally been viewed as something bad because if species hybridise they can, over time, merge into a single species and you lose biodiversity or lose the local species. The melting pot of Lake Mweru gave us a rare opportunity to study interactions between evolving new species and showed that in a new environment with lots of ecological opportunity hybridisation can be a good thing that actually increases biodiversity.”