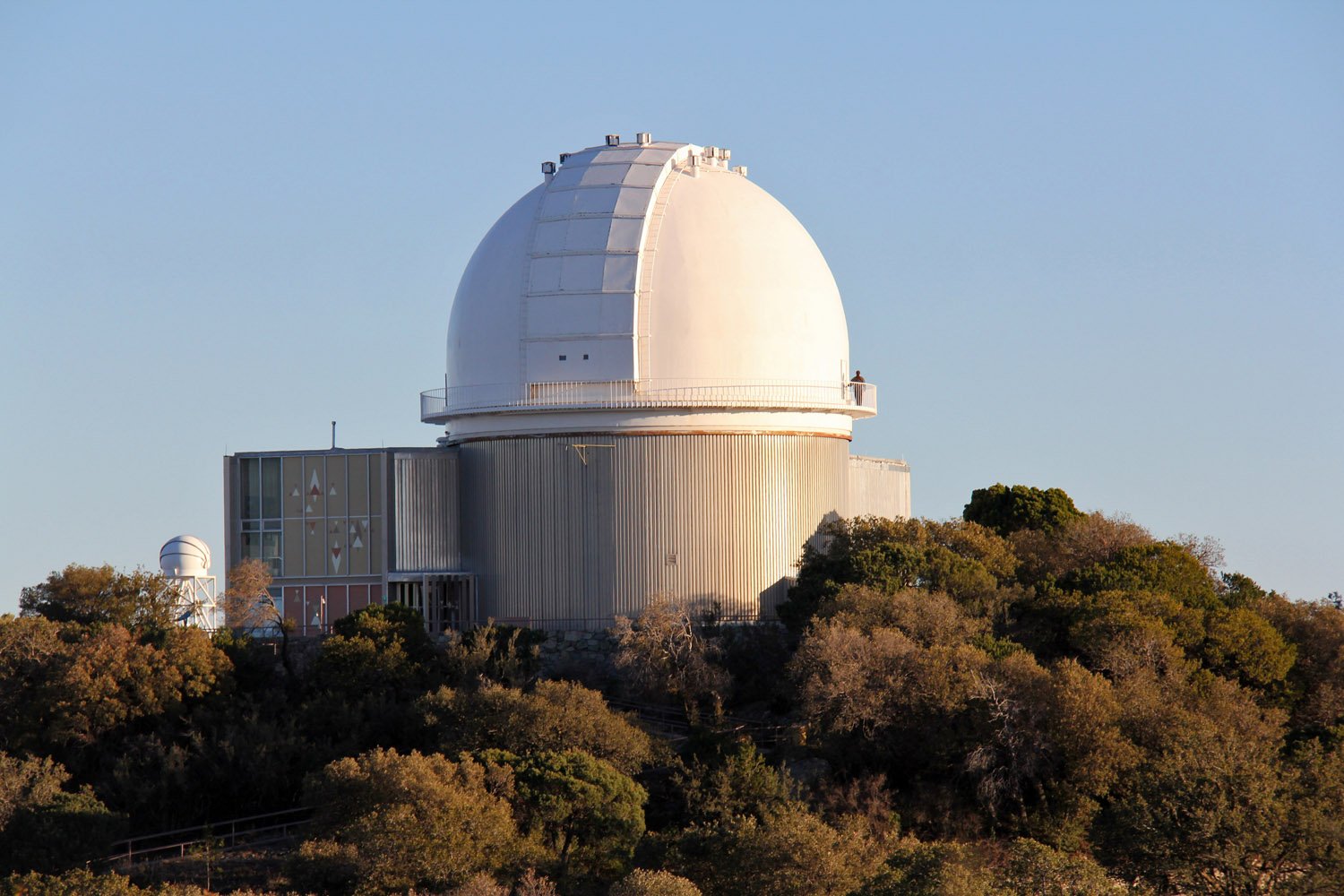 Observations made with a new instrument developed for use at the 2.1-meter (84-inch) telescope at the National Science Foundation’s Kitt Peak National Observatory have led to the discovery of the fastest eclipsing white dwarf binary yet known. Clocking in with an orbital period of only 6.91 minutes, the rapidly orbiting stars are expected to be one of the strongest sources of gravitational waves detectable with LISA, the future space-based gravitational wave detector.

The Dense “Afterlives” of Stars

After expanding into a red giant at the end of its life, a star like the Sun will eventually evolve into a dense white dwarf, an object with a mass like that of the Sun squashed down to a size comparable to Earth. Similarly, as binary stars evolve, they can engulf their companion in the red giant phase and spiral close together, eventually leaving behind a close white dwarf binary. White dwarf binaries with very tight orbits are expected to be strong sources of gravitational wave radiation. Although anticipated to be relatively common, such systems have proven elusive, with only a few identified to date.

A new survey of the night sky, currently underway at Palomar Observatory and Kitt Peak National Observatory, is changing this situation.

Each night, Caltech’s Zwicky Transient Facility (ZTF), a survey that uses the 48-inch telescope at Palomar Observatory, scans the sky for objects that move, blink, or otherwise vary in brightness. Promising candidates are followed up with a new instrument, the Kitt Peak 84-inch Electron Multiplying Demonstrator (KPED), at the Kitt Peak 2.1-meter telescope to identify short period eclipsing binaries. KPED is designed to measure with speed and sensitivity the changing brightness of celestial sources.

This approach has led to the discovery of ZTF J1539+5027 (or J1539 for short), a white dwarf eclipsing binary with the shortest period known to date, a mere 6.91 minutes. The stars orbit so close together that the entire system could fit within the diameter of the planet Saturn.

“As the dimmer star passes in front of the brighter one, it blocks most of the light, resulting in the seven-minute blinking pattern we see in the ZTF data,” explains Caltech graduate student Kevin Burdge, lead author of the paper reporting the discovery, which appears in the today’s issue of the journal Nature.

A Strong Source of Gravitational Waves

Closely orbiting white dwarfs are predicted to spiral together closer and faster, as the system loses energy by emitting gravitational waves. J1539’s orbit is so tight that its orbital period is predicted to become measurably shorter after only a few years. Burdge’s team was able to confirm the prediction from general relativity of a shrinking orbit, by comparing their new results with archival data acquired over the past ten years.

Kitt Peak’s 2.1-meter telescope, the second major telescope to be constructed at the site, has been in continuous operation since 1964. Its history includes many important discoveries in astrophysics, such as the Lyman-alpha forest in quasar spectra, the first gravitational lens by a galaxy, the first pulsating white dwarf, and the first comprehensive study of the binary frequency of stars like the Sun. The latest result continues its venerable track record.

“These wonderful observations are further proof that cutting-edge science can be done on modest-sized telescopes like the 2.1-meter in the modern era,” adds Chris Davis, NSF Program Officer for NOAO.

As remarkable as it is, J1539 was discovered with only a small portion of the data expected from ZTF. It was found in the ZTF team’s initial analysis of 10 million sources, whereas the project will eventually study more than a billion stars.

“Only months after coming online, ZTF astronomers have detected white dwarfs orbiting each other at a record pace,” says NSF Assistant Director for Mathematical and Physical Sciences, Anne Kinney. “It’s a discovery that will greatly improve our understanding of these systems, and it’s a taste of surprises yet to come.”